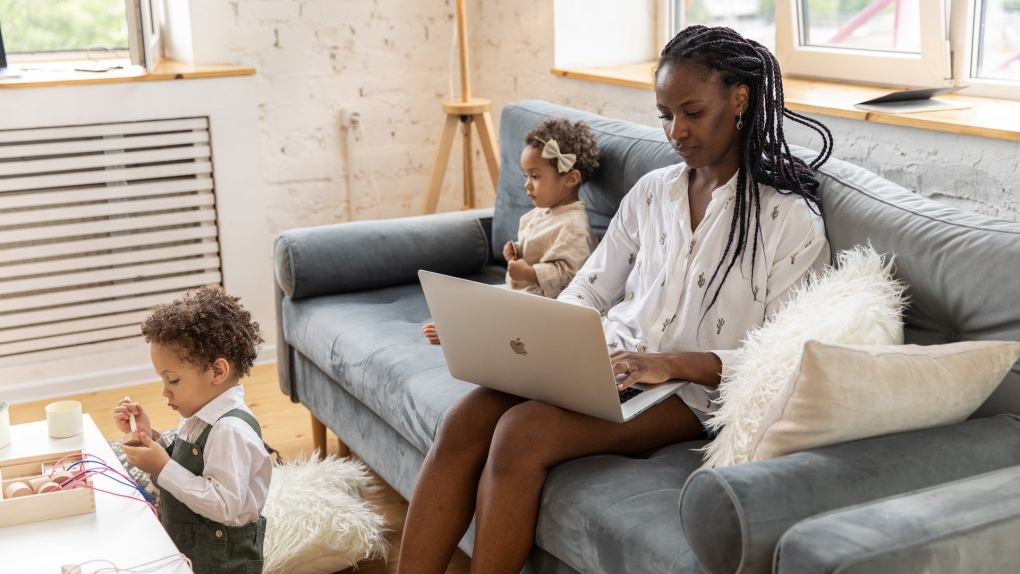 A mother is seen working from home with her two kids. (Ekaterina Bolovtsova/Pexels)

TORONTO -- While public health measures to help limit the spread of COVID-19 have made some Canadians feel lonely or isolated, experts say these restrictions have had the opposite effect on others, leaving families and couples who live and work in the same space with little time for themselves.

Robert Coplan, a psychology professor at Carleton University in Ottawa, says loneliness has been a rising mental health issue during the pandemic. However, he explained that others may be dealing with something called aloneliness, a term he came up with a few years ago.

"We came up with the term aloneliness as a way of representing what happens when you don't satisfy your need for time alone. So when there's a discrepancy between how much time you would like to be spending alone, and how much time you actually get to spend alone," he explained in a telephone interview with CTVNews.ca on Friday.

While feelings of loneliness can have negative impacts someone’s physical and mental health, Coplan said the same can be said when they don't get enough alone time.

He says having a balance between socializing and solitude is necessary for people to function and experience their full well-being. However, Coplan notes that the pandemic has "taken away" people's control over how much of either they can achieve.

"Imagine if you are a young working couple with two kids who are learning at home and you're both working from home. Suddenly, you're going to find yourself in a situation where you get virtually no chance to be alone," he explained.

Coplan cautions, however, that there is no "one size fits all" solution to aloneliness. He says people need different amounts of solitude based on their own circumstances.

THE DESIRE TO BE ALONE

Tania DaSilva, a child, youth and family therapist in Toronto, told CTVNews.ca that aloneliness is something she has seen her clients struggle with "a lot" in recent weeks, especially among families who find themselves doing work and school under one roof.

"They don't have that time to breathe and that time to unplug because there is no transitional period, there is no separation. You wake up, you're all on top of each other throughout the day, and you're all trying to do separate things in the same room," DaSilva said in a telephone interview on Friday.

DaSilva said even a commute to work or going to the gym may have previously provided someone with up to an hour of alone time.

"Those times to just be alone, relax, not have anyone ask you anything, do something that's important to you without being distracted or disrupted, we've lost a lot of those," she said.

While she has seen families struggle with aloneliness, DaSilva says couples without children are also grappling with the issue.

"I find with couples, they're missing that aloneness because they just want some time to themselves to do something for themselves, to kind of disconnect from the person that they live with," DaSilva said, adding that not enough time apart has caused some to question their relationship.

"They don't have as much to talk about, there's not as much to do, they might be getting more agitated and irritated with each other because they’re cooped up together constantly," she said.

To help combat this, DaSilva says families and couples need to have "open discussions" about scheduling time for everyone to be by themselves without feeling guilty. She said this may be difficult for fear of offending one’s partner or kids.

"Start off with first just having that general conversation about why alone time is necessary so [they] see that it's less about potentially getting alone time from [them] and more about a general need for everyone," DaSilva said.

She says families and couples can then create a routine with allotted alone time for everyone. She says this can vary from everyone having alone time at the same time in separate rooms, or adding micro moments of alone time through one’s day such as a 15 minute break after a work meeting, going for a walk, or doing the grocery shopping alone.

DaSilva said it is also important to establish boundaries around this so one another's solitude is not interrupted.

"A lot of our parents, families or even just individuals that live with roommates they might take that long way home to buy themselves time so it's getting creative in terms of where we can find alone time, and how we can get it," DaSilva said

SOME CANADIANS IMPACTED MORE THAN OTHERS

Roger McIntyre, a psychiatry and pharmacology professor at the University of Toronto, told CTVNews.ca that aloneliness isn't impacting everyone amid the pandemic.

He said in a telephone interview on Thursday that he suspects the phenomenon is disproportionally affecting those already hit hardest by COVID-19 including women, racial minorities, and those of lower socioeconomic status.

McIntyre says these groups do not have the means to access financial or mental supports that would help them achieve more alone time.

"You can almost hypothesize that people who are more well off and have other resources, or larger living environments may be a little less prone to this," he added.

While McIntyre acknowledges that humans are "social creatures," he says everyone, regardless of gender, race or background, needs a "sense of individuality."

McIntyre explained that this can be achieved by having time by one's self to relax, but also by "finding solace" in the current environment. He says this can range from something simple like putting on noise cancelling headphones, to pursuing an activity that is outside of what one’s partner or family is interested in.

"For many people who don’t have the economic resources, they tell me that this has been very helpful for them to create and impose structure," McIntyre said.

By engaging in a hobby on one's own, such as a musical instrument, painting, drawing, or reading, McIntyre said it subsequently gives all parties involved separation.

"[It's] almost like timeout rooms for yourself literally by going outside, or more metaphorically by finding pursuits away from what your family is doing day-to-day," he said.