TORONTO -- Preliminary research that looked at how far droplets from a cough can travel and how long they can linger in the air suggests the physical distancing measures currently in place to slow the spread of the novel coronavirus may not be enough.

Professors from Florida Atlantic University’s (FAU) College of Engineering and Computer Sciences recently conducted the cough-travelling experiment with the goal of seeing what happened to smaller particles that exist in the exhaled jet of a cough.

Manhar Dhanak, a professor and chairman of the engineering department at FAU, carried out the lab study with Siddhartha Verma, an assistant professor in FAU’s Department of Ocean and Mechanical Engineering.

Dhanak and Verma used flow visualization to make their synthetic cough jet visible to the naked eye. The cough fog was made of a mixture of distilled water and glycerin. They mechanically simulated the expulsion of particles and droplets that come from a human cough or sneeze using a mannequin and a fog machine. To help visualize the exhaled particles, the researchers used LED and laser lights.

The study highlights that particles and droplets that come from a human cough or sneeze typically range in size from five to 500 microns. The particulates that Dhanak and Verma used in their experiment ranged in size from 10 to 20 microns. For perspective, a fine grain of sand is about 100 microns.

Preliminary results from the experiment showed that particles from the cough were able to travel a significant distance in a matter of seconds and could linger in the air for more than a minute.

The flow visualization shows that as soon as they were expelled from the dummy’s mouth, the droplets travelled a distance of a metre almost immediately. Within about five seconds, the particulates had moved two metres. Within 12 seconds, they had moved about three metres. The experiment went on to show that the droplets continued to linger in the air and moved about another metre in distance. 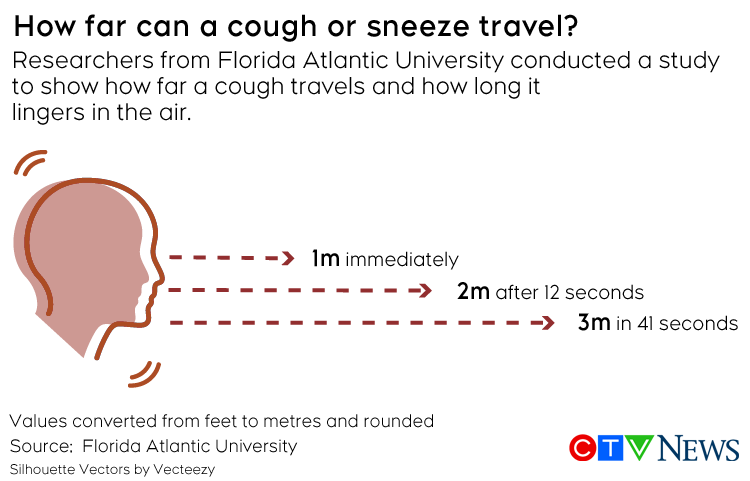 This isn’t the first time researchers have studied this topic and suggested that the two-metre, or six foot, distance rule may not be enough. The question was raised in an April 17 report published in Science News, and this New York Times piece from April 14, among others.

The physical distancing guideline currently recommended by government and health officials in Canada and by the World Health Organization was based on how far larger droplets found in a person’s cough or sneeze can travel, and many scientists have agreed that two metres is a reasonably safe distance to maintain, especially if people are outdoors and are wearing masks.

FAU researchers pointed out that how far a cough can travel also depends on factors like how heavy the cough is and the kind of airflow happening in a given area. They also suggested the droplets become less dense the further they travel, but they still lingered in the air.

And even a simple face mask placed on the dummy didn’t fully break up the particles. “We found that wearing a face mask doesn’t stop the particles 100 per cent, but it does slow down the cough jets,” Dhanak said in a report published by FAU.

While Dhanak and Verma say they still need to conduct more research to refine their findings, their preliminary conclusions could have a significant impact on how the public protects itself from highly contagious diseases like the coronavirus.

“There is currently a gap in knowledge over how COVID-19 spreads, as well as a scientific debate about how the disease moves in the air. This experiment will help to shed more light on the spread of the disease through aerosols,” said Stella Batalama, the dean of FAU’s College of Engineering and Computer Science.

Batalama added that the research also underscores the importance of properly covering your cough or sneeze and wearing a face mask while in public.

'Where the tragedy really lies': The crisis in Canada's long-term care homes

'No remedy, no rights': Canadians among foreigners blocked from leaving China

New Normal: Rear-facing seats could be the future of air travel