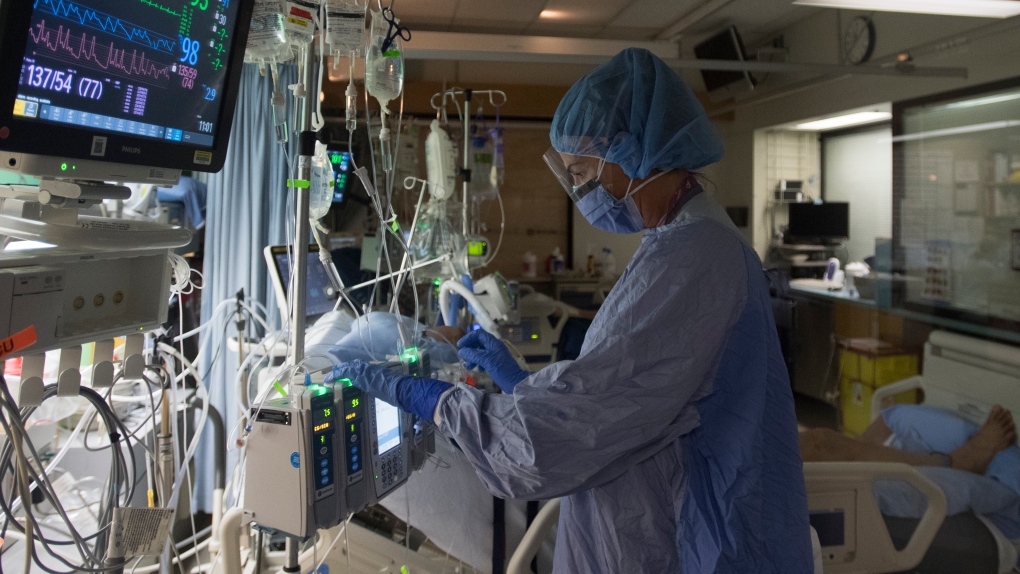 In this file photo, registered nurse Liana Perruzza attends to a patient in a COVID positive room in the COVID-19 intensive care unit at St. Paul's hospital in downtown Vancouver, Tuesday, April 21, 2020. THE CANADIAN PRESS/Jonathan Hayward

TORONTO -- Around 1,500 nurses have died from COVID-19 around the world, according to the International Council of Nurses (ICN) — a number they believe is a fraction of how many health-care workers have likely been killed by the virus.

ICN said in a press release Wednesday that they had looked at 44 countries across the globe and found that 1,500 nurses had died of the virus so far, up from the 1,097 deaths that were recorded as of August.

Because not every country tracks how many health-care workers have been infected, it’s a number that’s hard to pinpoint.

The Canadian Institute for Health Information (CIHI) reported in September, using data up to July 23, that there had been 12 deaths among health-care workers in Canada.

In that same CIHI report, they found that 19 per cent of all of the COVID-19 cases in Canada at that time were health-care workers -- nearly double the average found by the ICN.

The Canadian Federation of Nurses Unions (CFNU) told CTVNews.ca in an email that as of July, they had counted 16 deaths among health-care workers in Canada, but added that they did not know if these numbers were included in the ICN’s count in their new analysis.

The high rate of infection among health-care workers in Canada compared to other countries is a sign that we did not learn from SARS, according to a recent study commissioned by the CFNU.

The ICN has been keeping track of fatalities due to COVID-19 among nurses since the start of the pandemic. In April, they reported that more than 100 nurses had died. By May, 260 nurses had died, they found, with 90,000 health-care workers infected. In June, the deaths had reached 600.

ICN Chief Executive Officer Howard Catton said this week in a virtual conference that the impact on health-care workers needs to be tracked better.

“The fact that as many nurses have died during this pandemic as died during World War I is shocking,” he was quoted as saying in a press release. “Since May 2020 we have been calling for the standardized and systematic collection of data on health-care worker infections and deaths, and the fact that is still not happening is a scandal.”

The ICN’s data is collected through nursing associations who are keeping their own information on infections and deaths. They also look at government resources and numbers as well as credible media sources, and ran a survey targeting countries with high caseloads, receiving responses from 32 countries for their August results.

Since the term “health-care worker” is defined differently around the world, the ICN’s definition, according to a report published in September, refers to any staff who work in health-care facilities, both public and private, including doctors, nurses, assistants and hospital support staff, among others.

Catton said that the pandemic has been a wake-up call to how important health care and health-care workers are.

“This is a major lesson for the future,” Catton said. “When this is over, we must never take our health systems for granted again, and we must invest much more heavily in them and our health workers.”