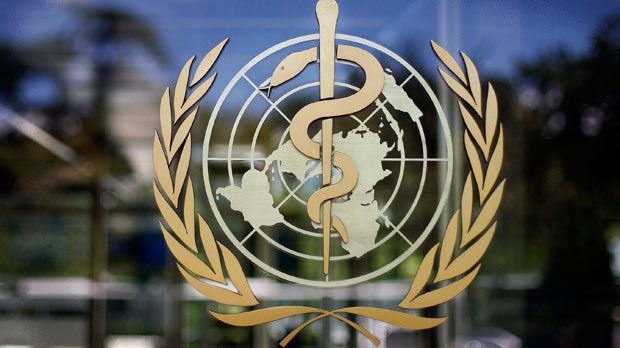 The logo of the World Health Organization is seen at the WHO headquarters in Geneva, Switzerland, Thursday, June 11, 2009. (AP / Anja Niedringhaus)

TORONTO -- The World Health Organization has reported two additional cases of infection with the new coronavirus, the earliest on record.

The agency says retrospective testing of stored samples show two people who died in Jordan in April were infected with the virus, which is from the same virus family as SARS.

Prior to this the first known case had been a man from Jeddah, Saudi Arabia, who fell ill and died in June.

The new report from the WHO brings to nine the number of confirmed infections with the new virus, of which five cases have been fatal.

When it came to light that a new coronavirus was causing severe human illnesses in the Middle East, questions were raised about an outbreak of severe pneumonia cases that had occurred in Jordan in April.

At the time health officials were not able to diagnose what was causing the illnesses, but stored samples from two of the patients tested positive recently for the new coronavirus.

In a statement issued Friday, the WHO says Jordan's ministry of health has asked the global health agency for assistance in investigating the infections.

A team from WHO's Eastern Mediterranean Regional Office and from WHO headquarters arrived in the Jordanian capital, Amman on Wednesday to help with studies aimed at trying to trace the source of infection and strengthen capacity to spot new cases.

A potentially worrisome aspect of the Jordanian outbreak is that it involved health-care workers. Health-care workers can be unwitting sentinels in disease outbreaks, picking up infections from patients that they treat. If health-care workers become infected, that can often -- though not always -- be a sign a pathogen can spread from person to person.

To date there has been no sign of sustained person-to-person spread of the virus, though there was a recent cluster of three and possibly four family members who got sick in Riyadh, Saudi Arabia. Two of them died.

The Jordanian cases may signal spread from patients to health-care workers happened there. But it's too soon to conclude that, said WHO spokesperson Gregory Hartl, who noted the health-care workers and the patients could have been infected for a common -- and as yet unidentified -- source.

"Even if the cases in Jordan were human-to-human spread -- and we don't know that -- it wasn't sustained," Hartl said in an interview from Geneva. He noted that there has been no sign of spread to health-care workers in Saudia Arabia or Qatar, the two other countries that have had cases, nor in London or Germany, where two of the cases have been treated.

Hartl said with cases popping up over large distances in three different countries, and over months, much work remains to be done to figure out what is going on. "There are a lot of holes still to be filled in," he said.

The WHO has asked countries to be on the lookout for possible cases in people with unexplained severe infections who have recently returned from or lived in countries in the Arabian Peninsula, or surrounding countries.

To date the case count is as follows: Jordan, two, both fatal; Saudi Arabia, five, three fatal and Qatar, two.

A report on the outbreak -- noted in a weekly disease report from the European Centre for Disease Control in May -- said seven nurses and a doctor were among 11 cases identified in the outbreak at a hospital in Zarqa, Jordan.