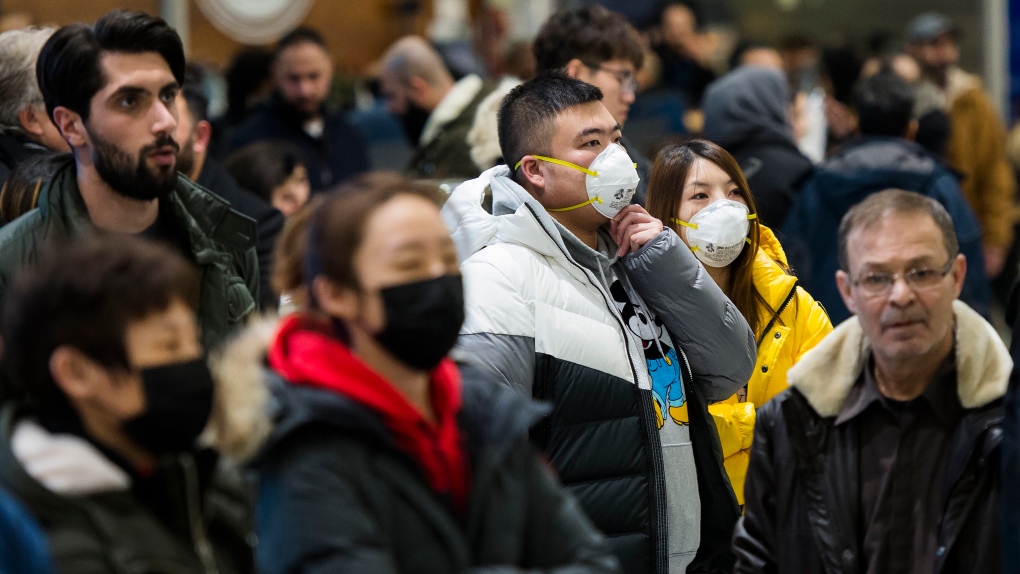 People wear masks as they wait for the arrivals at the International terminal at Toronto Pearson International Airport in Toronto on Saturday, January 25, 2020. THE CANADIAN PRESS/Nathan Denette

TORONTO -- An inflated perception of the risks of COVID-19 could be spurring xenophobia and impacting the mental health of Canadians, according to two professors now cautioning against “coronaphobia.”

In a new editorial in the scientific Journal of Anxiety Disorders, University of Regina psychology professor Gordon J.G. Asmundson and University of British Columbia psychiatry professor Steven Taylor write that they worry fears about the novel coronavirus are “having a significant psychological impact” on the public.

They cited a public opinion poll from early February by Angus Reid which found that, out of roughly 1,300 Canadians polled, one in three were worried about becoming infected.

The potentially deadly virus has been dominating headlines since before it was given an official name. The virus has captured public attention due to uncertainties over how the disease spreads as well as the rapid escalation in confirmed cases.

As of Friday, more than 76,000 people have contracted the virus globally, with the vast majority of those cases occurring in China, where the outbreak began. More than 2,100 people have died.

Although reporting on the outbreak is important, the professors say that being unable to escape discussion of COVID-19 may be affecting Canadians’ behavior and decisions to a degree that is disproportionate to the risk they face from the disease itself.

There have been nine confirmed cases of the virus in Canada. Since receiving treatment, three people from Ontario have officially recovered in hospital, including the very first person to test positive in Canada.

Nevertheless, surgical masks have sold out in many stores across Canada.

However, the authors write that the most visible way that “coronaphobia” may be affecting Canadians’ behavior may not be changes to their hygiene practices, but an increase of reports of xenophobia within the country.

The editorial pointed out that since COVID-19 emerged in Wuhan, China, “there have been numerous reports of xenophobia directed towards Chinese people.”

They cite examples of Chinese restaurants seeing a downturn in business in Canada, Chinese nationals being barred from certain restaurants and cruise ships refusing Chinese travellers.

They aren’t the first to flag the discriminatory attitudes. This week, a non-profit group supporting Chinese restaurant owners put out a press release saying that business has dropped “by at least 50 per cent,” with some restaurants seeing an 80 per cent decrease.

The Calgary Chinese Community Service Association released a statement in early February saying they worried that rhetoric around the virus was “demonizing,” their community.

Ming Yang told CTVNews.ca that her holiday plans were ruined when Norwegian Cruise Lines decided not to accept passengers with Chinese, Hong Kong or Macau passports.

Canada’s chief public health officer, Dr. Theresa Tam, posted on Twitter in late January that she was concerned about racism and “stigmatizing comments on social media directed to people of Chinese and Asian descent.”

She urged people not to make assumptions about others.

According to the new editorial, this is not unusual to see during an outbreak.

“The rise of infection-related xenophobia has been reported in many previous epidemics and pandemics, and appears to be an unfortunately common response when people are threatened with an infection that originates from outside of their community,” the professors wrote.

“More research is needed to understand the relationship between coronaphobia and coronavirus related xenophobia.”

The editorial said that in past pandemics and viral outbreaks, sensationalized headlines and misinformation have “been shown to fuel health-related fears.”

“An important question is whether healthcare systems throughout the world are ready to deal with the surge of so-called ‘worried well’ patients; that is, the surge into hospital emergency rooms of people who misinterpret their bodily sensations as signs of potential infection with the 2019-nCoV coronavirus,” the professors wrote.

“It is vitally important to understand the psychosocial fallout of 2019-nCoV, such as excessive fear (or lack of concern and due caution) and discrimination, and to find evidence-based ways of addressing these issues.”