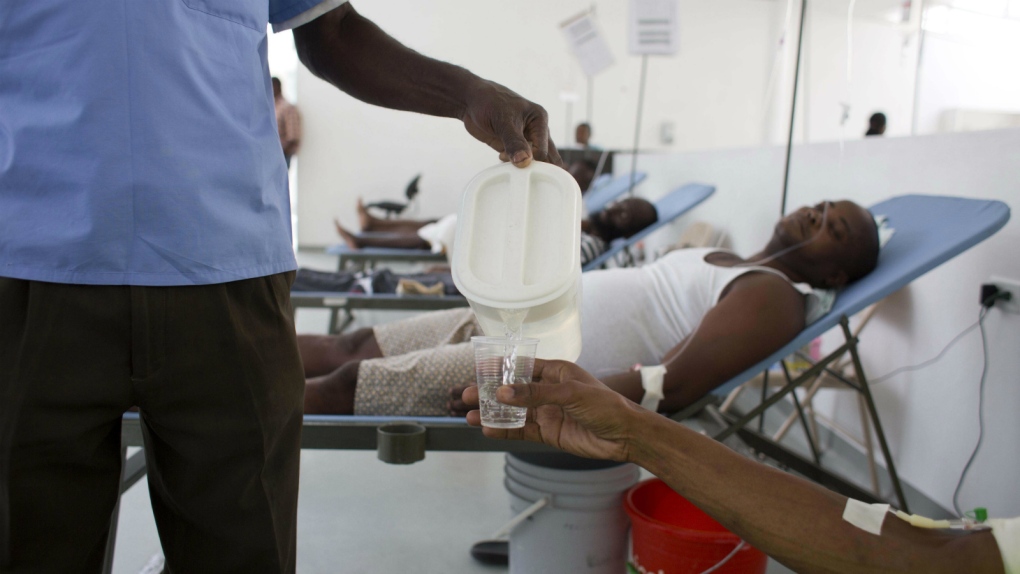 PORT-AU-PRINCE, Haiti -- More than a dozen people reclined on cots inside the clinic in the Haitian capital, a few so sick they were receiving intravenous infusions to rehydrate their bodies and spare them an agonizing death.

The worst off one recent morning was a thin and spectral man, weak from the vomiting and diarrhea caused by cholera. But all were expected to survive. The disease spread by contaminated water is easily treatable but can lead to death within hours if unattended.

"However I got it, I really hope I never get this sick again," another patient, Estin Josue, said as he recovered inside an immaculately clean and orderly treatment centre in downtown Port-au-Prince run by Gheskio Centers, a Haitian medical organization.

Josue and his fellow patients were relatively lucky, getting sick close to the country's first permanent cholera treatment centre. Many others are not as fortunate as Haiti continues to wrestle with the worst outbreak of the disease in recent history.

The persistence of the preventable disease has alarmed public health experts who fear that attention and resources have been diverted by newer challenges, including the regional spread of the Zika virus and the political crisis that recently halted Haiti's elections.

World Health Organization spokesman Gregory Hartl said cholera is now considered "endemic" in Haiti, meaning it's an illness that occurs regularly. Others have noted the cholera bacterium could very well be firmly established in Haiti's rivers, estuaries and even coastal waters.

"Once it is established in a country's aquatic reservoir it is extremely difficult to eradicate," said Afsar Ali, a researcher at the University of Florida who has led studies of cholera in Haiti for years.

Dr. Joseph Donald Francois, who co-ordinates the health ministry's efforts to combat the illness, still believes Haiti, with international help, can eliminate cholera by 2022. But he acknowledged the effort is badly underfinanced.

Only $307 million, or less than 14 per cent, has been funded of a $2.2 billion plan announced in 2013 to eradicate cholera from the island shared by Haiti and the Dominican Republic over a decade, according to a November report from the UN.

In the first year of the outbreak, more than 200 international organizations were providing money and expertise to combat the illness in Haiti. Now, there are fewer than a dozen, Francois said.

"Having far fewer deaths has led a lot of people to believe the situation is no longer urgent," Francois said. "But if we had the resources, people wouldn't be dying at all."

Cholera was first detected in central Haiti's Artibonite Valley. Researchers say there is ample evidence the disease was introduced to the country's biggest river by inadequately treated sewage from a base of UN peacekeepers from Nepal, one of the units that have rotated in and out of a multinational force in Haiti since 2004.

Victims' advocates have sued the UN in the United States. A federal judge ruled last year that the international organization was immune from a lawsuit seeking compensation. The U.S. Court of Appeals this week heard arguments for the plaintiffs challenging the UN immunity claim. A decision is not expected for months.

Five UN human rights experts have criticized the UN's "effective denial of the fundamental right of the victims of cholera to justice," saying in a letter late last year to top UN officials that the approach "challenges the credibility of the Organization as an entity that respects human rights."

Cholera showed up 10 months after a devastating earthquake in the south of Haiti, deepening the country's misery at a time when it was ill-equipped to cope with a second crisis.

New research published this month by the U.S. Centers for Disease and Control and Prevention suggests cholera's death toll in Haiti could have been significantly higher due to inadequate reporting early in the outbreak.

While the number of cholera cases has been significantly reduced from its first wave and the mortality rate has been slashed to lower than 1 per cent from a high of 9 per cent in December 2010, the fact that cholera is still killing Haitians more than five years on is galling to public health experts.

"We need to raise our expectations of what's possible to do in Haiti and other countries in terms of these diseases that we've completely eliminated from our own societies," said Dr. Louise Ivers, a senior policy adviser with Boston-based Partners In Health.

Ivers was working in Haiti's central plateau when cholera started sickening and killing so many people that it gave the nation the globe's highest rate of cholera one year after it was introduced. She said there hasn't been nearly enough progress addressing the lack of sanitation and access to clean water that are key to eliminating cholera and believes progress has stalled.

Only 24 per cent of Haitians have access to a toilet, sewage is rarely treated and safe water remains inaccessible to many.

Jean Bertho, an unemployed labourer walking by a trash-strewn gully shook his head when asked about the disease.

"I wouldn't be surprised if cholera lasts for another 50 years here," he said. "There's so much garbage everywhere and Haitian people can't get good water easily."