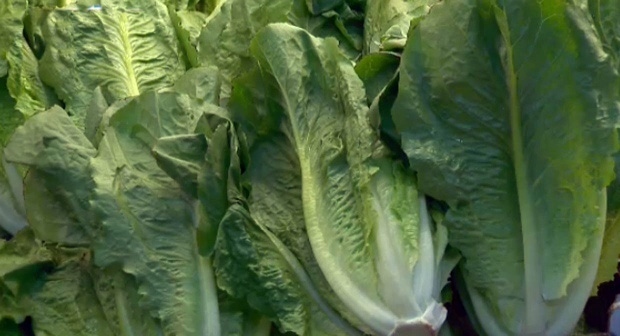 The grocery chain said it was removing all romaine lettuce, including all Compliments-brand products containing romaine, “until further notice.”

An E. coli outbreak linked to two deaths and dozens of illnesses in Canada and the United States continues to grow, with no clear answers on what’s causing the life-threatening infections.

The U.S. Centers for Disease Control and Prevention announced late last week it’s investigating a multi-state outbreak of E. coli that appears to be genetically similar to the bacterial that has made at least 41 Canadians ill as well.

The CDC says because the E. coli strains in both countries are genetically related, the ill people likely share “a common source of infection.”

But what has sparked this outbreak remains unclear.

The Public Health Agency of Canada has identified romaine lettuce as the source, but it notes “the cause of contamination” has not been identified.

There are many ways lettuce can be contaminated with E. coli: in the field through contaminated water or manure; during harvest; during transportation and storage; at a grocery store; or in the home through cross-contamination from raw meat or poultry.

In the U.S., officials with the CDC, the FDA, and state public health authorities have been conducting interviews with the 17 people who have become ill in the U.S. outbreak, to learn what they ate in the week before their illness.

So far, the CDC has not found any food item common to all those who have become ill – including romaine lettuce.

“Because we have not identified a source of the infections, CDC is unable to recommend whether U.S. residents should avoid a particular food,” the agency said in its statement on Dec. 28.

On the same date, PHAC said Canada’s E. coli outbreak appears to be “ongoing,” noting that illnesses continue to be reported.

Canadian health officials have stopped short of ordering a recall of romaine lettuce until more is known about the cause of contamination.

Instead, they are advising consumers in Ontario, Quebec, New Brunswick, Nova Scotia, and Newfoundland and Labrador “to consider consuming other types of lettuce, instead of romaine lettuce.”

Just before Christmas, the Sobeys grocery store chain announced it was pulling all romaine lettuce products from all its shelves out of "an abundance of caution” amid the outbreak.

The grocery chain pulled all whole romaine lettuce, and all Compliments-brand products containing romaine. It said the items would no longer be for sale “until further notice.”