Canadian scientists have made history with a world first, successfully using focused ultrasound to break through one of the human body's final frontiers -- the blood-brain barrier.

The researchers have unlocked a non-invasive way to deliver medication deep into the brain, opening the door to better treatments for brain tumours, Alzheimer's, Parkinson's and more.

The blood-brain barrier has long been an obstacle for doctors trying to treat brain diseases. The barrier is a layer of tightly packed cells that act like plastic wrap, surrounding each of the brain's blood vessels, protecting them from infections and toxins.

Because little can get through this barrier, it is frustratingly difficult for doctors to treat tumours and brain diseases because life-saving drugs can't enter brain cells.

But neuroscientists at Sunnybrook Health Sciences Centre have found a non-invasive solution. They have devised a new technique involving microbubbles and focused ultrasound to get through the barrier.

And they say their method has already shown good results in animal tests.

Now they have begun testing the approach on humans.

Bonny Hall is the first patient to undergo the technique. Hall is a mother, grandmother and business owner who recently learned that the benign brain tumour she has lived with for eight years had begun to grow quickly and was malignant.

Though she was at first stunned by the news, she is now looking forward to being part of this new study.

The type of tumour Hall has is a glioma. The tumours are often difficult to treat because spread out in a web, and can't be completely removed with surgery.

Doctors can use chemotherapy to treat what is left behind after surgery, but only about 25 per cent of the drugs reach the brain, says Dr. Todd Mainprize, who is leading this new study. That is in part why brain cancer survival rates are so low, he says.

"Frankly speaking, our ability to treat this type of tumour, glioma, is not so good," he told CTV News. "…Between 1940 and 2005, there has been very little progress in improving the outcome of these patients."

Treatments have improved somewhat in the last decade but "it is still not good enough," he said. 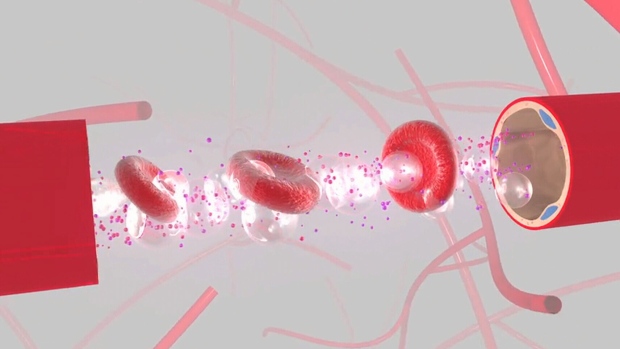 The non-invasive technique involves injecting harmless gas microbubbles into the bloodstream, then using a high-intensity ultrasound beam onto the tumour to cause the bubbles to vibrate and tear apart the proteins around capillaries, thus allowing the drug into brain tissue. (Columbia Engineering)

“It’s very targeted,” Mainprize told CTV’s Canada AM Monday. “It seems to be extremely safe, it doesn’t cause any damage. And it’s transient; after about 12 hours, that sort of ‘Saran Wrap’ coating around the blood vessels re-heals and the blood-brain barrier remains intact.”

Hall underwent surgery later in the day to have the bulk of her tumour removed. She will also likely receive radiation and chemotherapy as part of her followup care.

“We’ll compare the amount of chemotherapy that got into the tumour where we opened the blood-brain barrier and where we didn’t, to see if there is a significant increase in the delivery of the chemotherapy.”

Nine other brain cancer patients will soon be treated in the same way, and then researchers will publish the full results.

Kullervo Hynynen, one of the scientists who has been working on this technique, says the animal tests went well and if the approach works in humans, it would be a game-changer.

"It will revolutionize the way we treat brain disease completely. It will give hope to patients who have no hope," Hynynen says.

Sunnybrook cancer specialist Dr. Maureen Trudeau is already planning her own study to see if the therapy can deliver more of the drug Herceptin into the brain tumours of HER2-positive breast cancer patients who have had their disease spread to the brain.

Mainprize says the method could be used for all sorts of brain conditions besides cancer.

"There are possibilities of delivering new chemicals and therapies for depression, Alzheimer's disease, stem cells," he said.

For Bonny, the payoff will be more immediate.

"My hope is that I can just be a normal mom, a normal grandma," she says.