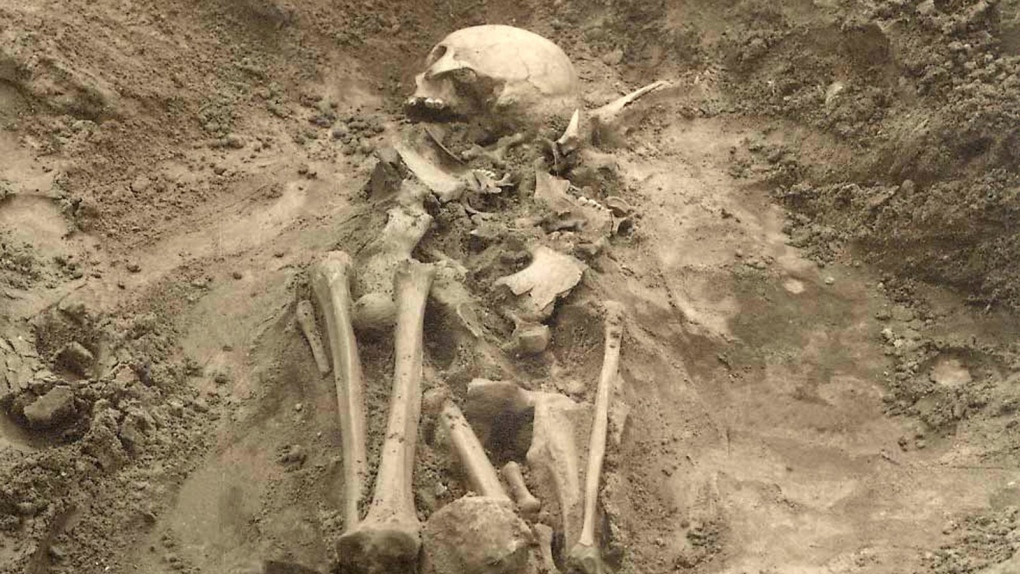 In this undated photo released by Cell journal, the Sope I grave in Estonia, where plague DNA was found in a tooth from this individual and is the earliest evidence of plague found in Europe. (Harri Moora / Cell 2015 via AP)

Plague outbreaks in London spread four times faster in the 17th century than they did in the 14th century, researchers have estimated after studying troves of wills and death records.

Researchers from McMaster University in Hamilton analyzed thousands of documents spanning 300 years -- including personal wills and testaments, parish registers and the London Bills of Mortality -- to search for patterns on how plague was spreading through the population.

Plague, one of the deadliest bacterial infections in human history, caused an estimated 50 million deaths in Europe during the Middle Ages when it was known as the Black Death. The disease, though rare and now treatable with antibiotics, is still around today -- cases have been recorded in China and the United States as recently as this year.

There was a "striking acceleration" in plague transmission between the Black Death of 1348 and the Great Plague of 1665, researchers said in findings published Monday in the Proceedings of the National Academy of Sciences journal.

David Earn, a professor in the department of mathematics and statistics at McMaster and lead author of the research, told CNN that while plague cases in London doubled every six weeks in the 14th century, by the 17th century, they were doubling every week and a half.

"That's an enormous difference," he said.

But this was not simply a case of the disease becoming more virulent -- evolutionary geneticist Hendrik Poinar told CNN that while the spread of the disease accelerated, genetic analysis to date tentatively suggests that it may have become less infectious.

"When there are shifts in the epidemiology of the disease, most of the shifts that occur can be translated to human intervention or things that go on outside of the actual genetics of the bug," Poinar, a professor in the department of anthropology at McMaster and a co-author of the study, said.

The estimated speed of the epidemics, coupled with what we know about the biology of the plague, suggested that plague did not spread primarily through human-to-human contact during these centuries, but instead, growth rates for early and late epidemics are more consistent with bubonic plague, transmitted by the bites of infected fleas, the researchers said.

Researchers believe that factors including population density, living conditions and cooler temperatures could go toward explaining the acceleration of the disease in London -- and could help with our understanding of modern pandemics, such as the current COVID-19 pandemic.

"A given pathogen can cause very different epidemics, whether it's in the same place over time, or in different places," Earn explained.

The findings could also provide a blueprint to how the current pandemic and future pandemics could behave.

"Plague never went away and it won't ever go away, and (SARS-)CoV-2 will never go away," Poinar told CNN, explaining that the virus, like the plague, has "natural reservoirs" in the population.

"Fortunately we have a phenomenal scientific community, you know across the globe, working ... more or less together right now to figure out a way to come up with antibody treatment, to come up with, hopefully, a vaccine that's effective for longer-term immunity," he said.

But he also cautioned that pandemics will continue to threaten humans so long as people encroach on the natural world -- something scientists and environmental organizations have repeatedly warned.

"The reality is if you think that this is the only time it's going to happen, you're fooling yourself, because it's happened repeated times in human history and it's bound to happen again as we continue to encroach on lands -- the same thing with climate change and environmental deconstruction -- we're bound to run into more reservoirs that spill over into humans," he added.