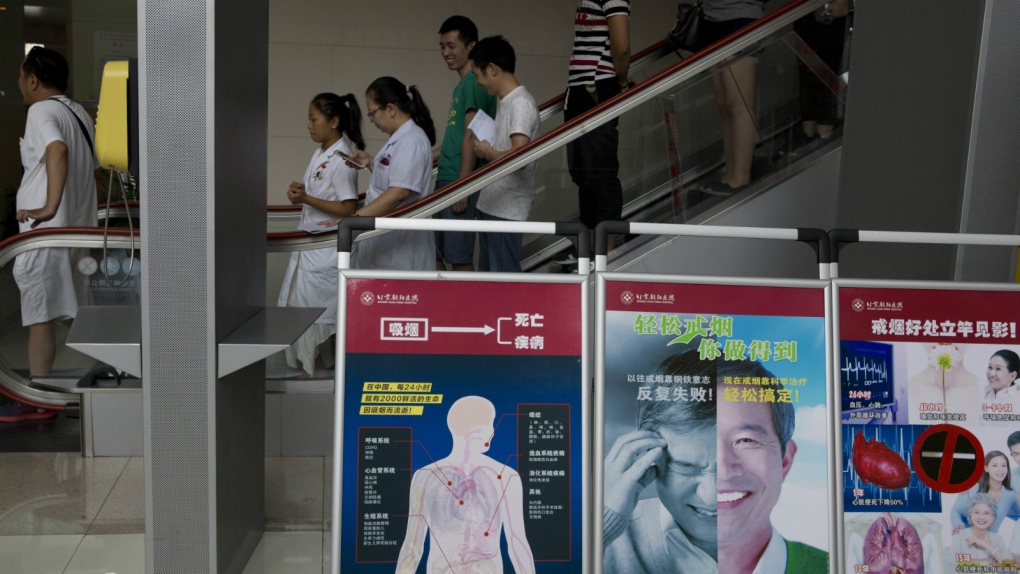 Hospital staff and visitors past by boards warning of the damage to human organs from smoking at the Beijing Chaoyang Hospital, one of the hospitals approved for organ transplants, in Beijing, China on Wednesday, Aug. 24, 2016. (AP / Ng Han Guan)

CANBERRA, Australia -- Two Canadian lawyers came to Australia's Parliament House on Monday to persuade lawmakers to pass a motion urging China to immediately end the practice of what they say is organ harvesting from prisoners of conscience.

David Kilgour, a former prosecutor and Canadian secretary of state for the Asia-Pacific, and David Matas, a human rights lawyer, have published evidence they say shows that China performs an estimated 60,000 to 100,000 transplants a year, with organs primarily taken from Falun Gong practitioners, Muslim Uighurs, Tibetan Buddhists and Christians.

China says it performed 10,057 organ transplants last year and has not harvested organs of executed prisoners since January 2015.

The U.S. House of Representative passed a resolution in June calling on the State Department to report annually to Congress on the implementation of an existing law barring visas to Chinese and other nationals engaged in coercive organ transplantation. The resolution also condemns persecution of Falun Gong, a spiritual group China calls a cult and has outlawed.

The European Parliament passed a similar declaration in July calling for an independent investigation of "persistent, credible reports on systematic, state-sanctioned organ harvesting from non-consenting prisoners of conscience" in China.

"The greatest amount of skepticism seems to be in Australia," Kilgour said.

Kilgour and Matas first published a report on organ harvesting in China in 2006, which became the basis of their 2009 book "Bloody Harvest. The Killing of Falun Gong for their Organs."

Australian Department of Foreign Affairs and Trade First Assistant Secretary Graham Fletcher told a Senate committee last month that he had doubts about the credibility of Falun Gong reports of forced organ harvesting.

"They are not given credence by serious human rights activists," Fletcher said, referring to Amnesty International and Human Rights Watch.

Amnesty International's Australian spokeswoman Caroline Shepherd said the London-based organization had not done its own research into organ harvesting in China and supported United Nations' calls for an independent investigation of such allegations.

The Australian Health Department said at least 53 Australians travelled to China for organ transplants between 2001 and 2014.

Matas said it was not possible for such a large organ-transplant industry to thrive without the support of the Communist Party.

Around 200 Falun Gong practitioners demonstrated outside Parliament House against forced organ harvesting on Monday as Matas and Kilgour addressed a meeting of lawmakers from several political parties.