Children’s dietary habits at school are not making the grade, according to new research from the University of British Columbia.

An analysis of what nearly 5,000 Canadian students between the ages of six and 17 said they ate and drank while in school scored an average of 53.4 out of 100 points.

Researchers found that intake of less nutritious food, like sugary beverages, candy, and salty snacks spiked during school hours. Students consumed 20 per cent less dairy products during school hours leading to less consumption of vitamins A, D and B12 and calcium.

The research was published Wednesday in the journal Applied Physiology, Nutrition and Metabolism. Dietary data was provided by the 2004 Canadian Community Health Survey.

Researchers looked at dietary data that fell on school days in 2004 between the hours of 9 a.m. and 2 p.m.

Tugault-Lafleur and her co-authors found children consume about one-third of their total daily calories during the school day.

The researchers cross-referenced the children’s sociodemographic information and found students from families with post-secondary education had scores that averaged two points higher, enough they said to be statistically significant. 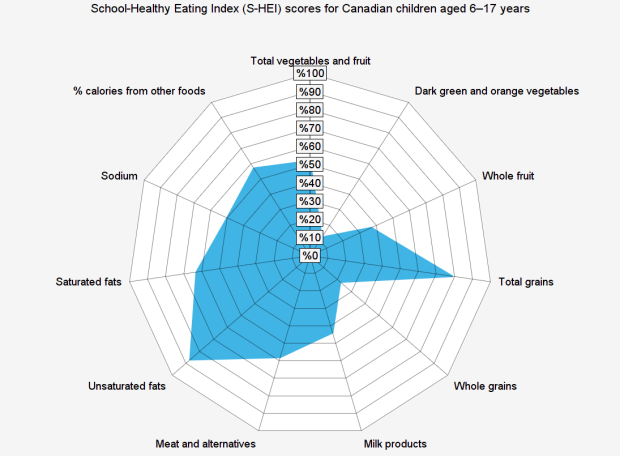 “When we know what kids are consuming at school, we can develop national policies to address these problems,” Tugault-Lafleur told CTV News Channel.

The Canadian government recently announced it would be holding consultations to develop a new national food policy. Tugault-Lafleur hopes that parents can take this study and help build the new policy based on this new information.

Tugault-Lafleur said she intends to use the 2004 data set as a baseline to compare against the 2015 Canada Community Health Survey, released earlier this month.

“I’d like to see if there are some places in the country where we see greater improvements in school-hour diet quality, and whether different initiatives or school nutrition policies were implemented in these regions from 2004 to 2015,” she wrote.

Tugault-Lafleur also said she hopes parents can look at this study and improve on what they are packing for school lunches, with a focus on whole fruits, vegetables, whole grains and dairy products.

The study concluded that there is an opportunity to promote healthier eating at school and increase the consumption of dairy which would lead to a higher intake of protein, vitamins A and D, calcium and magnesium.