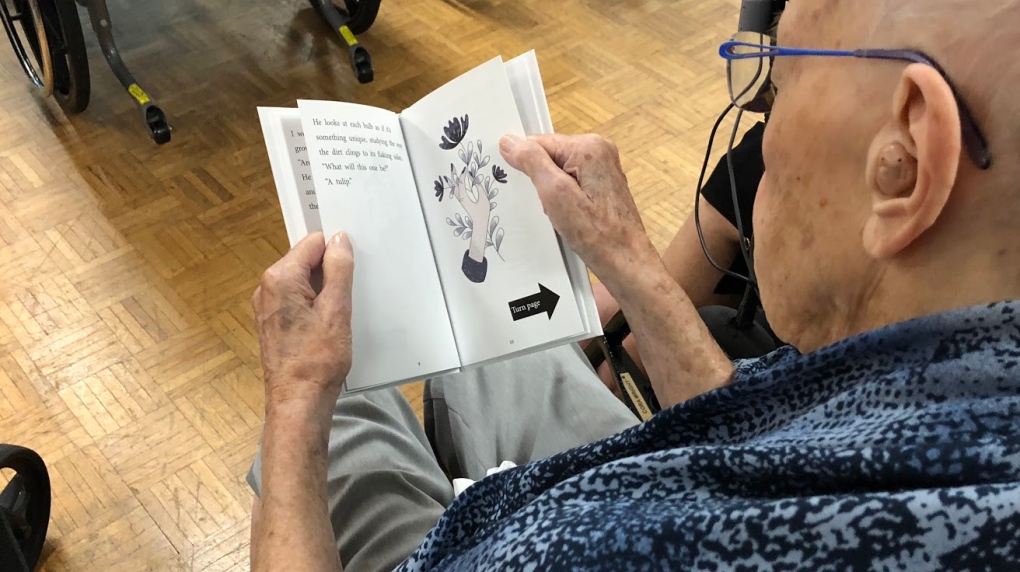 One day in 2015, Rachel Thompson’s grandmother, who has long lived with dementia, picked up a newspaper and began reading its headlines aloud, shocking her family who thought that her condition had robbed her of a favourite pastime.

“So then we started thinking, ‘Oh, it’s not that she can’t read, she just can no longer read books that she normally would be able to,’” Thompson told CTVNews.ca. “So I went online to try and order her… books that were made for people with dementia and I couldn’t find anything.”

Thompson, who was in the final year of a degree in the University of Waterloo’s health studies program at the time, was suddenly inspired by the novel idea of creating reading material for people like her grandmother.

“So I changed my senior research project to research the ties between the procedural memory and reading for individuals living with dementia,” she said. “The rest is kind of history.”

In the summer of 2015, Thompson pitched the idea to a social impact incubator. Three years later, her company, Marlena Books -- a portmanteau of “Marilyn” and “Helena,” her two grandmothers’ names -- has published “dementia-friendly” illustrated books on everything from romance to sports.

Thompson, who describes herself as an “accidental entrepreneur,” says the books provide people living with Alzheimer’s disease and dementia more “meaningful recreation” than the children’s books they are often given by caregivers.

“They focus on mature stories, so stuff that older adults would actually be interested in, but they’re at a reading level that is adjusted to be easier for them to read, which is normally around a Grade 5 reading level,” she explained. “They’re also quite short, so they’re always under 750 words (so) that (they) can be read in one sitting.”

Nearly everything else about the books has been designed with input from experts like optometrists and psychologists to make them as accessible as possible.

“Design-wise, we only use hard covers and thicker paper weights for those with dexterity issues,” Thompson said.

For those with vision loss, font type, size and spacing have been designed following the Canadian National Institute for the Blind’s “clear print” guidelines. Based on dementia eye-tracking studies, margins are also smaller than in typical books. “Turn page” prompts, moreover, are found at the bottom of each page.

“And you only see text on half of the page that has text because we found that individuals with dementia will often get overwhelmed if they’re facing a full page of text,” Thompson added. “Then there are little things that we’ve put into consideration, like we try and always use characters’ names instead of pronouns to help people remember who we’re referring to.”

The stories are also intentionally meant to evoke earlier memories.

“We try and centre our stories either when they were either in adolescence or an early adult because that’s typically where they can have the most memory recall,” Thompson said. “We have a hockey one that we originally thought was going to be a lot more popular with the guys. We found a lot of women who had sons who grew up playing hockey, that story really resonated with them because it would kind of bring back those memories of them watching their sons’ hockey games for many, many years.”

The books are written by authors from Ontario’s Kitchener-Waterloo region and illustrated by both local artists and dementia patients themselves.

“They’re always very colourful and enticing because if an individual maybe can’t process the words as well as they once could, then hopefully they can learn a bit more through the story by referencing the images,” Thompson said. And for those who can no longer read, the books give people a way to bond with their loved ones, she says.

Five titles are currently available as hardcover and e-books and 10 more are slated to be released in November. The books can be purchased on Marlena Books’ website and Amazon and can also be found in long-term care facilities and libraries across Ontario. In late October, the company will also be releasing an iOS app that will pair the books with accessibility features for those with later-stage dementia as well as data tracking capabilities for caregivers.

For Thompson, the company is all about improving wellbeing and overcoming “preconceived notions of what someone with dementia is able to do.”

“It’s definitely rewarding,” Thompson said of her ever-expanding social enterprise. “And it’s fun to see how it’s grown from something that started with just my grandmother to be something that’s affected a lot more people.”