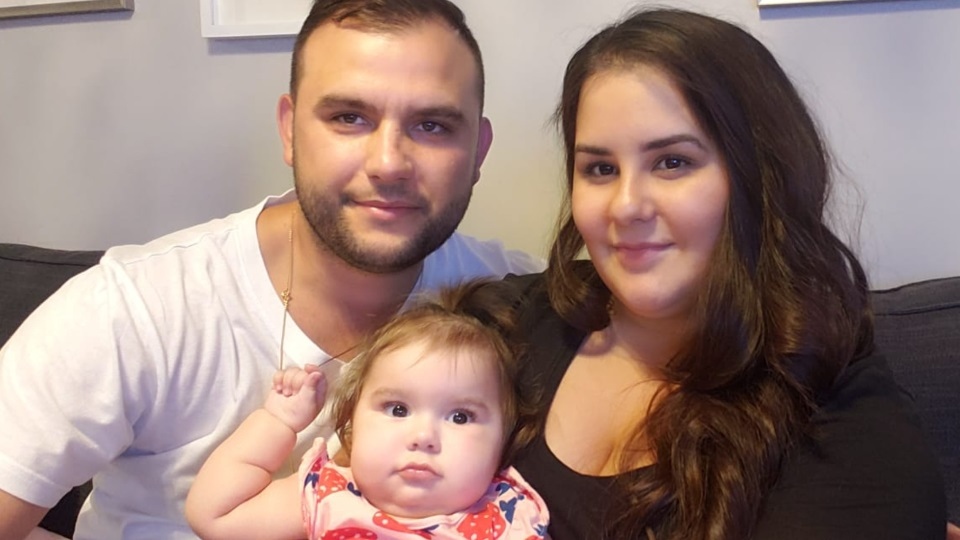 Ricardo and Jessica Batista with their daughter Eva. (Batista)

TORONTO -- A little over a year ago, the idea of raising US$2.125 million to receive the “world’s most expensive drug” for baby Eva Batista seemed impossibly daunting for her family. But thanks to generous donors, including a fellow fundraiser, Eva’s parents are elated she will have the necessary funds to get the lifesaving gene therapy treatment she needs.

Eva, who turned one in August, has spinal muscular atrophy (SMA), a rare neuromuscular disease that causes muscle weakness and atrophy. Basic mechanisms like breathing, which requires the diaphragm to contract, becomes a matter of survival. Many patients like Eva, who has Type 1 -- which are when symptoms are present either at birth or before they are six months -- do not survive past two.

This month, the family announced on their GoFundMe page and Instagram that they officially met their $2.8-million goal to get Novartis’ Zolgensma, a single-dose gene therapy for babies under the age of two with SMA.

“We are so thankful for each and every single one of you who donated, who helped share our story,” Eva’s mother, Jessica Batista, said on an Instagram video posted on Oct. 11. The Batista family could not be immediately reached.

“We are definitely, extremely grateful for a beautiful family in Vancouver who was fortunate enough to win the (Novartis) lottery, but generously helped us with finishing our campaign and helping us reach our goal to obtain Zolgensma.”

Novartis launched a global lottery system at the start of the year to give the drug for free in a “random allocation process” every two weeks, with the goal of giving 100 doses of Zolgensma around the world by the end of 2020.

The drug is available in the U.S., Japan and European Union, but is still waiting for approval from Health Canada, where it has a “priority review status.” The drug works by replacing a defective gene that causes SMA.

In the meantime, Canadian infants who need the drug must either fundraise, hope they can get it free through the Novartis lottery, or wait for Health Canada approval. But a government green light is a time-consuming process that may be too slow for infants since the drug is only for children under the age of two.

The Van Kendall family in British Columbia had also been fundraising for their daughter Lucy, who also suffers from SMA Type 1, when they found out in August that Lucy was randomly selected to receive Zolgensma in the global lottery.

The family had already raised almost $2.5 million by that point, according to their GoFundMe tally. After offering a refund to donors, the family decided to donate the bulk of the funds to seven Canadian babies also suffering from SMA Type 1. Their donation was able to complete Eva’s fundraising campaign.

“We know these donations alone are not enough to get them all Zolgensma right now but we will be able to finish Eva Batista fundraising campaign,” the family posted.

Lucy, who was born in April and diagnosed a month later, has since had her single dose of Zolgensma treatment. Despite some “ups and downs” the family shared online that Lucy made significant strides, including being able to hold her head up briefly for the very first time.

“We are working on sitting and rolling...We know it will be a long road from here but we are so encouraged by her progress,” the family wrote on their GoFundMe site.

As for Eva, her parents say she will get the treatment at Sick Kids hospital in Toronto, but no date was available yet.

With files from Jonathan Forani