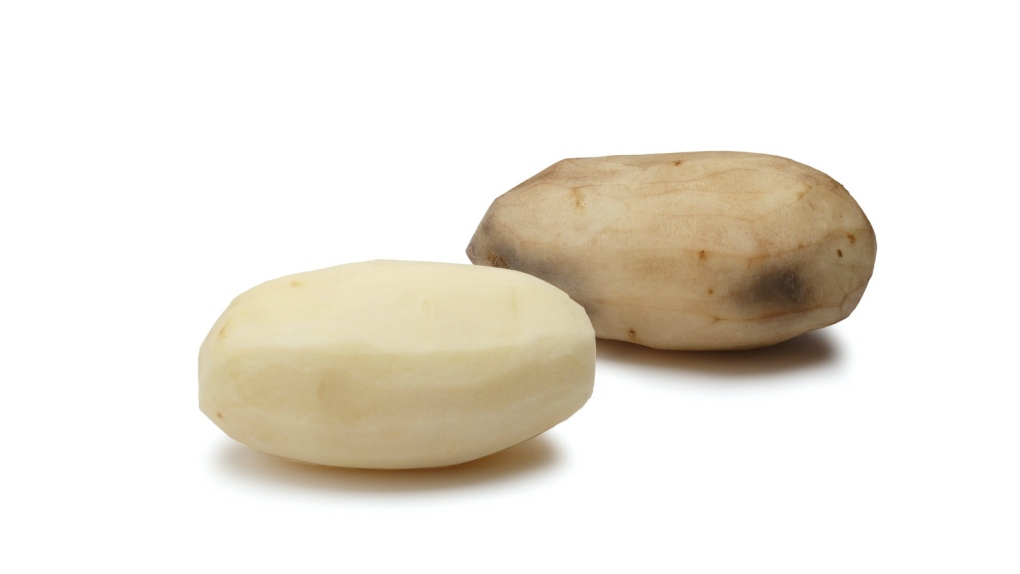 BOISE, Idaho -- Three types of potatoes genetically engineered by an Idaho company to resist the pathogen that caused the Irish potato famine are safe for the environment and safe to eat, Canadian officials said Thursday.

The approval by Health Canada and the Canadian Food Inspection Agency means the J.R. Simplot Co. potatoes can be imported, planted and sold in Canada.

The company said it received approval letters from Health Canada and the Canadian Food Inspection Agency in the last several days. Health Canada spokeswoman Renelle Briand confirmed the approvals to The Associated Press on Thursday.

"We have no objection to the sale of food derived from J.R. Simplot Company's" potatoes for human consumption, Karen McIntyre, director general of Health Canada, said in a letter sent on July 28 to the company.

Canadian officials in two other letters sent on Monday approved the environmental release of planting the potatoes and using the potatoes for livestock feed. Misshapen potatoes not considered top quality are used to feed livestock.

The three varieties of potato -- the Russet Burbank, Ranger Russet and Atlantic -- were approved by U.S. regulatory agencies in February.

The approval by Canada means the two nations can import and export with each other the potatoes that contain a gene resistant to late blight that led to the Irish potato famine.

The company said the potatoes contain only potato genes and that the resistance to late blight comes from an Argentine variety of potato that naturally produced a defence.

"There's strong interest from farmers to get that potato with that trait so they can spray less and have a better quality crop," Cole said.

There is no evidence that genetically modified organisms, known as GMOs, are unsafe to eat, but changing the genetic code of foods presents an ethical issue for some. McDonald's declines to use Simplot's genetically engineered potatoes for its French fries.

Simplot officials said the potatoes also have reduced bruising and black spots, enhanced storage capacity and a lower amount of a chemical that's a potential carcinogen and is created when potatoes are cooked at high temperatures.

Potatoes are considered the fourth food staple crop in the world behind corn, rice and wheat. Late blight, which rotted entire crops and led to the deaths of about a million Irish in the 1840s, is still a major problem for potato growers, especially in wetter regions.

Fungicides have been used for decades to prevent the blight. Simplot said the genetically engineered potatoes reduce the use of fungicide by half.

The most recent Canada and U.S. approvals apply to Simplot's second generation of Innate potatoes. The first generation didn't include protection from late blight or enhanced cold storage. The company said the potatoes have the same taste, texture and nutritional qualities as conventional potatoes.

Those potatoes are now available in 40 states and 4,000 supermarkets, Cole said, with about 60 million pounds (27.2 million kilograms) sold.

"We are pleased with sales in the U.S. and hope they will continue," he said.