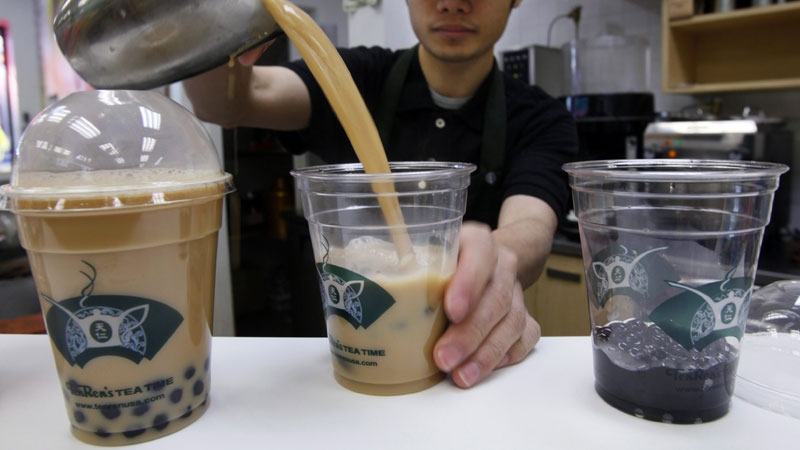 Bubble tea -- that sweet, tea-based drink filled with giant tapioca balls -- may be a hazard to your health.

A new German study finds the starchy balls can contain cancer-causing PCBs, a group of of industrial chemicals that have been linked to a long list of health hazards. Meanwhile, a German government group is warning the drinks could pose a choking hazard.

German researchers from the University Hospital Aachen tell the German newspaper the Rheinische Post that they conducted a study on bubble teas, using samples from an unnamed bubble tea chain in Germany.

They say all the tapioca bubbles used in the teas were manufactured in Taiwan and many contained traces of PCBs, or polychlorinated biphenyls.

"[What we found] includes in particular styrene, acetophenone, and brominated substances that shouldn't be in food at all," Manfred Möller, of the Institute of Hygiene and Environmental Medicine at the University Hospital Aachen, told the newspaper.

The institute has not yet released details about the concentration of the toxic substances it found, but no amount of PCBs in food is considered safe.

At the same time, with the popularity of bubble tea just beginning to grow in Germany, the country's Federal Institute for Risk Assessment (BfR) is warning that tapioca balls present a choking risk to children.

It says that when the starchy balls are sucked through a broad straw, they can get stuck in the trachea.

"Especially with children aged up to four years, there is a risk of foreign objects accidentally entering the lungs," Dr. Andreas Hensel said in a statement.

The group says kids can easily aspirate foreign bodies the size of peanuts into their lungs, and the little tapioca balls used in bubble tea are of the same size as peanuts.

The institute says no bubble tea-related accidents have yet been reported, but it says the potential for injury is there.

“For this reason, the BfR recommends that a clear reference to this health risk be made wherever bubble tea is sold,” the group, which advises the federal government on questions of food and product safety, said in a statement on its website last month.