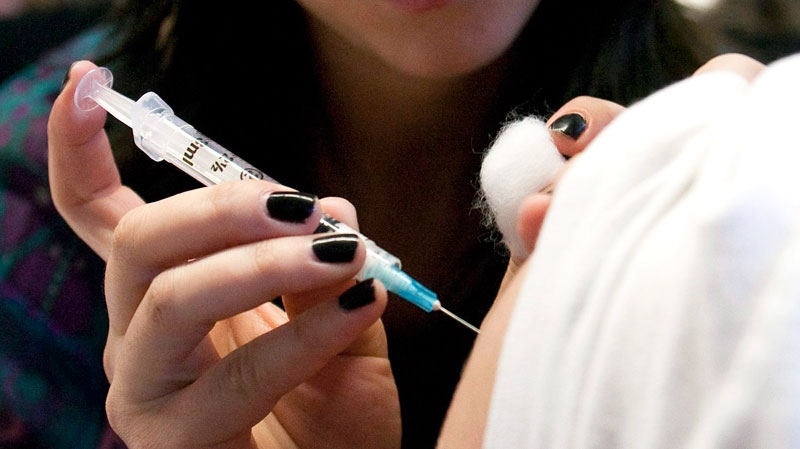 Nurse Laura Gill injects a vaccine into a young male at a vaccination clinic in Ottawa on Monday, Nov. 2, 2009. (Pawel Dwulit / THE CANADIAN PRESS)

A British website claiming to offer parents advice on vaccines has been ordered to remove wording that suggests the MMR vaccine is linked to some cases of autism.

Babyjabs.co.uk, which promotes single vaccines, said the three-in-one MMR vaccine for measles, mumps and rubella may be causing autism in "up to 10 per cent" of autism cases in “susceptible children” in the United Kingdom.

In fact, any link between the vaccine and autism has been thoroughly discredited. The single study that started the rumour of a link, written in 1998 by Andrew Wakefield, has since been shown to be scientifically and ethically flawed.

Wakefield has since been barred from practising medicine in the U.K. He continues to defend his research and conclusions.

The Advertising Standards Authority ruled Wednesday that the claims made on Babyjabs.co.uk were misleading and must not appear again.

The website has been ordered not to repeat claims that research “has been unable to exclude the possibility that (the MMR vaccine) is causing autism in a small number of susceptible children.”

It’s also been told not to repeat the unfounded claim that the vaccine-strain measles virus had been found in the gut and brain of some autistic children, suggesting the MMR vaccine as the cause of the autism in those children.

The website has also been ordered not to make other misleading claims about autism, including the suggestion that "most experts now agree the large rise (in autism) has been caused partly by increased diagnosis, but also by a real increase in the number of children with autism."

The Advertising Standards Authority investigated the website after a person complained that the site was perpetuating unfounded and misleading claims.

The ASA noted that the website did make it clear that the original allegations of a link between the MMR vaccine and autism by Wakefield were "strongly rejected" by government and the medical establishment.

Nevertheless, the standards agency said consumers were likely to infer from the rest of the website text that the vaccine might have played a role in any increase in autism.

Although Wakefield’s study has now been discredited and no peer-reviewed study has ever been able to replicate his findings, the legacy of his research continues almost 15 years later.

MMR vaccination rates plummeted in the U.K. and Europe in the years after the study’s release, and the result has been huge outbreak of measles and mumps. In 2011 alone, there were 26,000 cases of measles in Europe, resulting in at least eight deaths.

Unvaccinated Canadians travelling to Europe have also been blamed for bringing the disease to Canada. A measles outbreak in Drummondville, Que. last year caused 776 illnesses, and one out every nine of those patients required hospitalization.