Breast milk donations in short supply in some parts of Canada 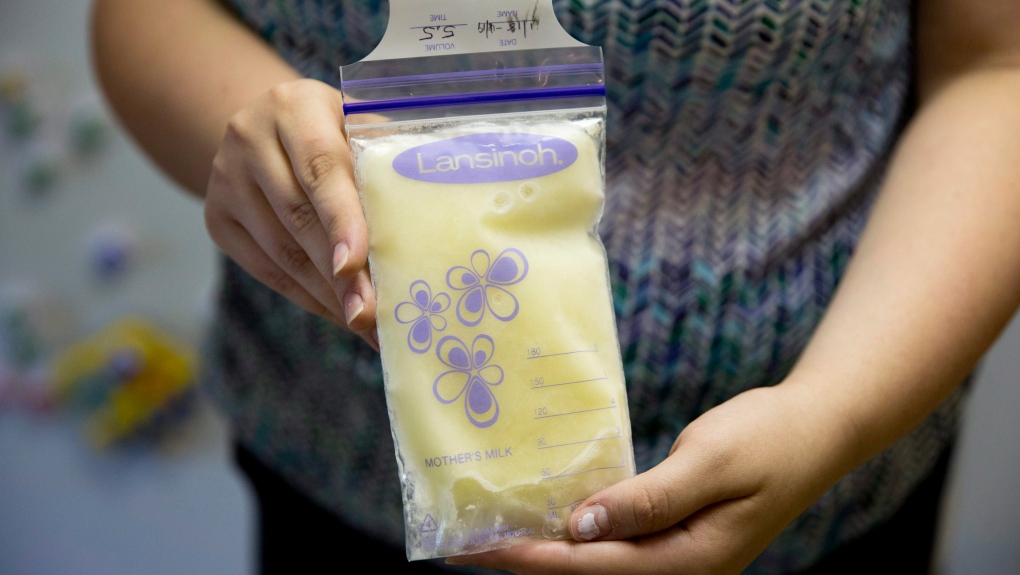 A woman poses for a photograph with her frozen breast milk in this file photo dated Wednesday, June 17, 2015, in West Chester, Pa. (AP Photo/Matt Rourke)
TORONTO -

Fewer milk donations from breastfeeding parents are causing a shortage in some parts of Canada, according to a milk bank that supplies several provinces across Canada.

Calgary-based NorthernStar Mothers Milk Bank says there has been a decline in donations during the pandemic and that they have seen a shortage.

“If we stay at the rate that we are now, in about a month we’re going to start running into issues,” co-founder and chief executive Jannette Festival told CTVNews.ca in a phone interview.

“It is a problem that we always have to monitor. It’s like blood donation, you can never say, ‘Oh, we have enough blood or we have too much blood.’ We don’t. It can turn so quickly.”

It is a challenge facing a number of regions across the U.S. as well, according to the Human Milk Banking Association of North America (HMBANA), which issued a statement last week urging those who were lactating to donate.

“Milk can take several days to be tested, processed, and made available for infants in need. Current supply is being used almost as quickly as it becomes available.”

NorthernStar put out a donation call on Thursday, asking those with excess milk to sign up and become a donor. While the majority of its donations come from Alberta, there are donors from the East Coast as well, Festival said.

The Calgary organization is one of four milk banks in Canada and the only community-based one. It dispenses pasteurized milk from approved donors to hospitals and homes in the provinces of Alberta, Saskatchewan, Manitoba, and all of Atlantic Canada.

Three of the four Canadian banks, including NorthernStar, are members of the HMBANA.

“So a 37 per cent increase in milk going out with a 12 per cent decrease in donors. We always look to three months ahead, but we’re having fewer people sign up and more milk going out the door,” Festival said.

While it is unclear why there was an increase in 2021, Festival said it was possible the pandemic played a role.

In 2021, critical care medical professionals expressed alarm at the disproportionate number of COVID-19 patients who were also pregnant and severely ill. At the time, the Ontario Society of Obstetricians and Gynaecologists pointed to situations where doctors had to perform a C-section on the ICU bed in order to properly treat the mother. And earlier this month, a group of Ontario hospitals that included Toronto's Hospital for Sick Children noted an increase in infants being hospitalized for COVID-19 due to a lack of maternal antibodies transferred from the unvaccinated parent.

Not all Canadian milk banks are experiencing this issue, however. In Ontario, the Rogers Hixon Ontario Human Milk Bank, which distributes pasteurized donor milk to 44 hospitals across the province and is a member of HMBANA, told CTVNews.ca that they were not experiencing any shortage.

“We continue to see a robust response from donors across the province and we are able to pasteurize an abundant supply of donor milk to meet the needs of vulnerable [neonatal intensive care] infants,” spokesperson Ashley Villarroel said in an email.

Quebec’s Public Mothers’ Milk Bank, which is operated by Héma-Québec and is not part of HMBANA, also told CTVNews.ca that they were not experiencing any shortage, and that the situation was fairly normal.

“We launched a small appeal at the beginning of January, but we were able to recruit enough mothers to make sure we were able to meet all the needs,” said spokesperson Laurent Paul Menard, adding that the group has not experienced any kind of abnormal changes in demand at hospitals.

BC Women’s Provincial Milk Bank was not immediately available to comment.

The World Health Organization says nearly 200 cases of monkeypox have been reported in more than 20 countries not usually known to have outbreaks of the unusual disease, but described the epidemic as 'containable' and proposed creating a stockpile to equitably share the limited vaccines and drugs available worldwide.