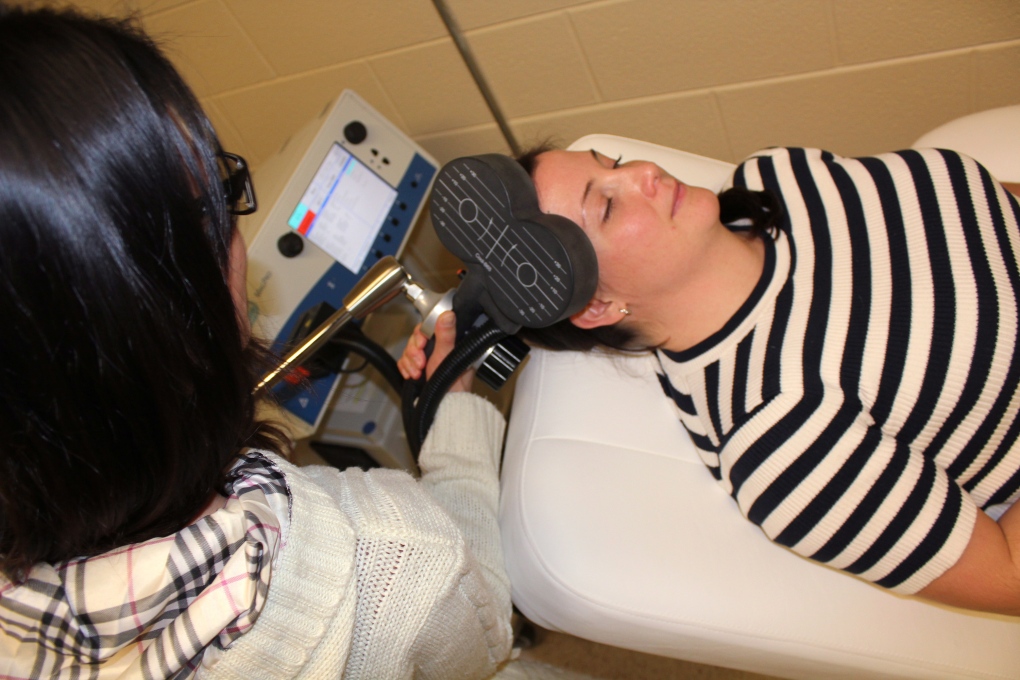 Known as repetitive transcranial magnetic stimulation, or TMS, the treatment "exercises" an area of the brain thought to be underactive in people with depression.

TMS is administered using a hand-held electromagnet that is held over the skull above the targeted area of the brain -- within the prefrontal cortex -- which is determined through an MRI scan.

"The magnetic field passes unimpeded through the skull, and so when it interacts with the brain, it causes an electrical current to flow in the brain tissue that it touches," said Dr. Mark George, director of the Brain Stimulation Laboratory at the Medical University of South Carolina.

"And so it's a relatively neat trick where you can non-invasively get in and stimulate the brain of an awake, alert person without any real major discomfort," George explained Tuesday during a teleconference organized by the Centre for Addiction and Mental Health (CAMH) in Toronto.

George, a psychiatrist and neurologist who pioneered the use of TMS to treat depression about 15 years ago, said the therapy is well-tolerated by patients and has minimal side-effects.

Up to 40 per cent of people diagnosed with major depression don't respond to antidepressants, the drugs' effects don't last, or patients can't tolerate their side-effects, he said. "So it's a big part of the population that needs a new treatment, and TMS is now starting to go there."

Gail Bellissimo, 52, of Mississauga, Ont., suffered for years with severe depression, and she could find no relief, even after trying several antidepressant drugs, combined with psychotherapy.

"Depression steals so much from a person. I describe it as an illness that insidiously takes one's senses -- sight, sound, touch, even smell and taste," she said. "There's no dimension to anything. Everything is dull, flat, monotone."

"I began to hate myself because I knew that I was letting down my family," said the married mother of four sons, aged 16 to 25. "And I just couldn't get to that place where I felt that everyone else was, experiencing and enjoying life."

"Telling someone who's depressed to look on the bright side, appreciate the little things or live in the moment -- it doesn't work. There are no moments. With depression, there's just existence."

But in February, Bellissimo was enrolled in a clinical trial at CAMH to compare different lengths of TMS therapy in patients with so-called treatment-resistant depression.

Her treatment, given in roughly five-second pulses with a few seconds' rest in between, "felt like someone tapping away at one spot" on the left side of her forehead, she said, adding that she experienced a headache, among the most commonly reported side-effects, but only after that first treatment.

Two weeks into her sessions, Bellissimo noticed "a shift ... it was a clarity and lightness," and full-fledged senses began to return.

"I could breathe. The lead weight and the incapacitating fog was lifted, allowing me to see a path, the direction of which was finally a positive one," she said. "I could laugh again."

"The treatment has allowed me to thrive -- not just survive. I'm in the best place I've ever been, loving life, recovering and looking forward."

Dr. Jeff Daskalakis, head of the Temerty Centre for Therapeutic Brain Intervention at CAMH, said treatment-resistant depression costs the health-care system about $19,000 per patient per year, while TMS costs about $6,500 per person.

"And the treatment itself has persistent effects," he said. "So once you achieve remission, the likelihood of staying in remission is quite high, provided you get maintenance treatments ... And the longer you keep people in remission, the less likely it is that they're going to experience a relapse."

"In other words, they don't have to get the treatment forever, but if you can maintain them in a wellness state for a prolonged period of time, then eventually the brain takes over and stays in that wellness state."