BPA-free? Plastic alternative BPS may not be safer, after all 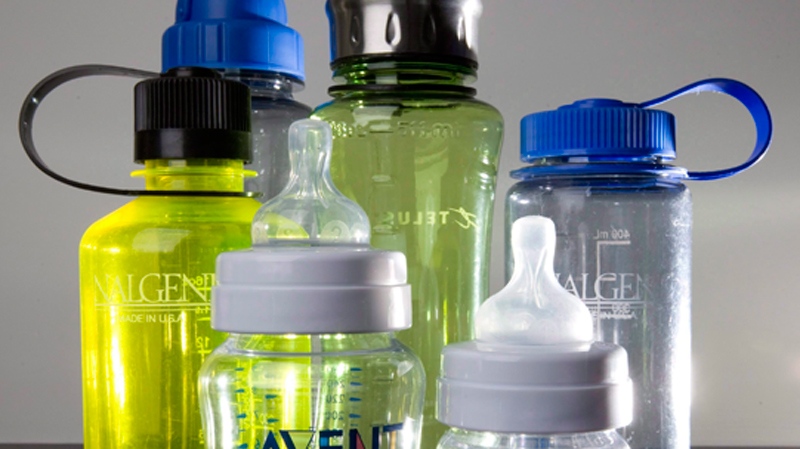 A collection of sport and baby bottles potentially containing compound bisphenol A is seen in North Vancouver, B.C. on April 18, 2008. (Jonathan Hayward / THE CANADIAN PRESS)

CALGARY -- A University of Calgary study has found that a common ingredient in consumer products can cause hyperactivity in zebrafish.

Bisphenol A, a chemical used to make household plastics and epoxy resins, is produced in large quantities around the world.

In response to public concerns, many manufacturers have replaced BPA with a chemical called bisphenol S (BPS), which is often labelled as "BPA-free" and presumed to be safer.

But the study's findings suggest that both BPA and BPS can cause alterations in brain development that can lead to hyperactivity in zebrafish.

The fish are widely used by researchers to help understand embryonic brain development. About 80 per cent of the genes found in people have a counterpart in zebrafish, which have very similar developmental processes as humans.

Zebrafish embryos were exposed to concentrations of the chemicals at levels found in the Bow and Old Man rivers in southern Alberta. The exposure to BPA and BPS changed the timing when neurons were formed in the brains of the fish.

"We wanted to use a dose that was found in a natural waterway and that people would get in their drinking water. Waste-water treatment plants do not filter out BPA so this is presumably what is coming into people's houses," said Kurrasch.

"We used a dose that is lower than what developing babies have naturally and we found that brain development is perturbed (in the fish)," she said.

"You have a bunch of cells in your brain and at some point they become neurons and they have to move to the right place to form the right circuitry. If neurons are born too soon, they can move to the wrong place and can form the wrong circuits."

The result was a change in behaviour -- the fish demonstrated greater hyperactivity later in life.

"Finding the mechanism linking low doses of BPA to adverse brain development and hyperactivity is almost like finding a smoking gun," said Hamid Habibi, a professor of environmental toxicology and comparative endocrinology in the Faculty of Science.

The study from Kurrasch, Habibi and Cassandra Kinch was published Monday in the Proceedings of the National Academy of Sciences. It was funded by the Natural Sciences and Engineering Research Council of Canada.

Kurrasch said further research is needed to explore the potential effect on human brains developing in the womb. She said the findings add weight to other studies suggesting pregnant women should try to limit their exposure to items containing bisphenols.

The next stage would be to test exposure to BPA and BPS on mice, Kurrasch said.

"It's the tip of an iceberg and I think there are many other avenues of research that could come out of that."