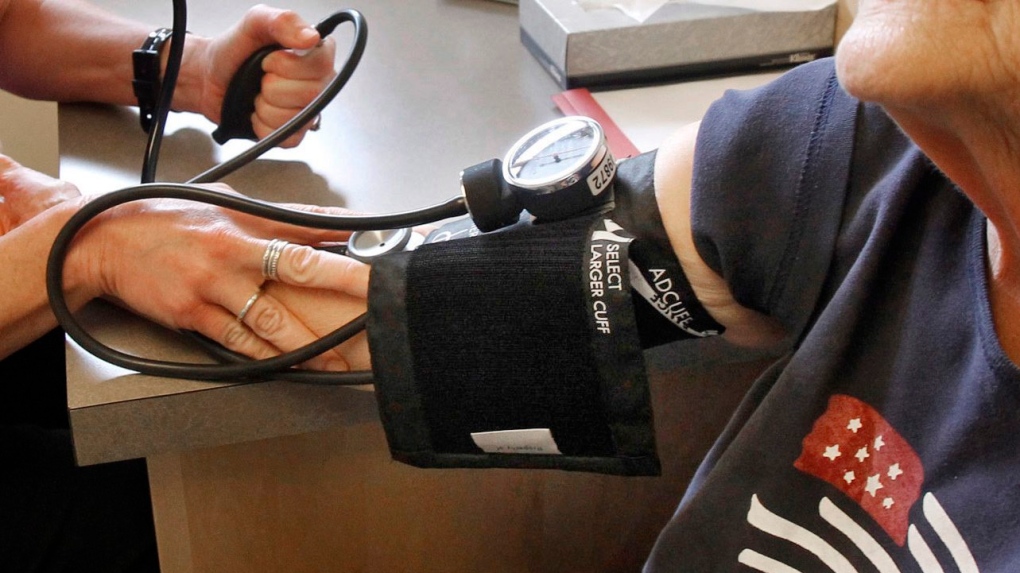 FILE - In this June 6, 2013, file photo, a patient has her blood pressure checked by a registered nurse in Plainfield, Vt. (AP Photo/Toby Talbot)

TORONTO -- A recall of medications used to treat high blood pressure and heart failure has been expanded over concerns additional lots of the drugs may contain a substance that can increase the risk of cancer, Health Canada said.

The agency said it asked Teva Canada to expand its voluntary recall on eight additional lots of valsartan medications as a precautionary measure.

That comes after Health Canada announced the recall of 28 valsartan medications last month because the drugs contained an impurity known as NDMA, a potential carcinogen that can cause cancer with long-term exposure.

A Health Canada spokeswoman said Monday that the recall has expanded because there may be traces of NDMA in the active valsartan ingredient in eight other medications.

"These are different products that have valsartan in it," said Sindy Souffront. "In the initial recall there was an impurity found in the valsartan used in these products."

Teva Canada released a statement addressed to pharmacists asking them to check their inventory for the recalled medications. The company did not immediately respond to requests for comment.

Health Canada said all of the recalled products use a valsartan ingredient manufactured by a pharmaceutical company in China.

The agency said it is reviewing the long-term potential health impacts of the NDMA impurity on patients, which will be completed in "the coming weeks." The review will include an assessment of how much NDMA patients may have been exposed to and for how long, it said.

A spokesman for the Canadian Pharmacists Association said that while patients may be worried about the recall, they shouldn't immediately stop taking their medication.

"There is concern especially with blood pressure medication," said Phil Emberley, who is also a practising pharmacist. "Don't stop taking your medication without consulting first, because your blood pressure could go up and that could cause a whole host of problems ... blood pressure can lead to a stroke or heart attack."

Emberley said it's important patients check with their health-care provider to determine if the medication they're taking has actually been recalled.

"I think it's important that people are aware about this," said Emberley. "If the medication happens to be recalled, there are other options. There are similar medications in the same class that are going to do the same thing."

A full list of the recalled medications can be found at this link.