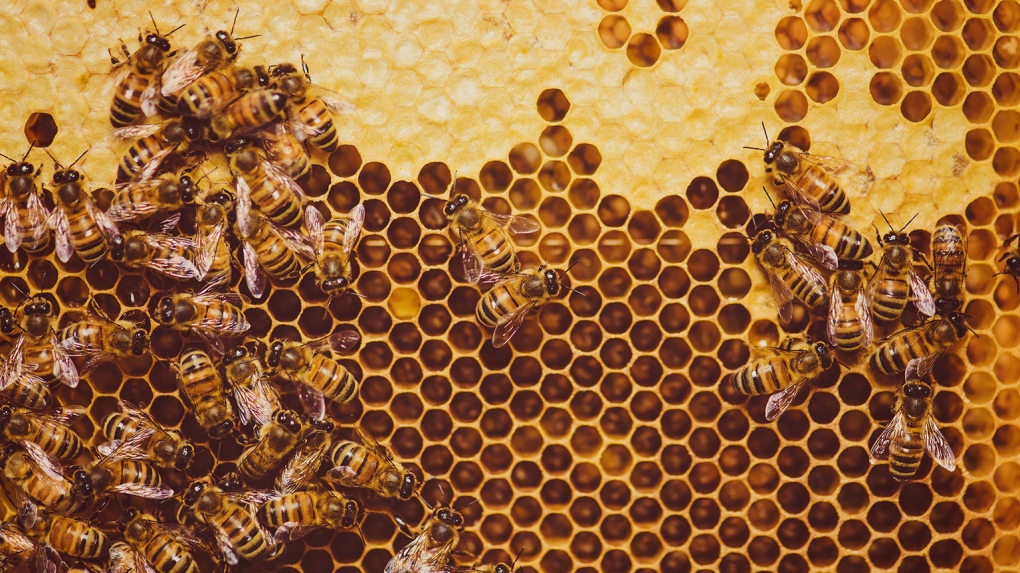 Traces of pesticides that act as nerve agents on bees have been found in 75 per cent of honey worldwide, research says. (knape / IStock.com)

Traces of pesticides that act as nerve agents on bees have been found in 75 per cent of honey worldwide, raising concern about the survival of these crucial crop pollinators, researchers said Thursday.

Human health is not likely at risk from the concentrations detected in a global sampling of 198 types of honey, which were below what the European Union authorizes for human consumption, the report said. The findings were published in the journal Science.

However, the study found that 34 per cent of honey samples were contaminated with "concentrations of neonicotinoids that are known to be detrimental" to bees, and warned that chronic exposure is a threat to bee survival.

Bees help pollinate 90 per cent of the world's major crops, but in recent years have been dying off from "colony collapse disorder," a mysterious scourge blamed on mites, pesticides, virus, fungus, or some combination of these factors.

"The findings are alarming," said Chris Connolly, a neurobiology expert at the University of Dundee, who also wrote an article alongside the research in Science.

"The levels detected are sufficient to affect bee brain function and may hinder their ability to forage on, and pollinate, our crops and our native plants."

Neonicotinoids have been declared a key factor in bee decline worldwide, and the European Union issued a partial ban on their use in 2013.

For the study, the European samples were collected largely before this ban took effect, Connolly said. Further research is needed to gauge the effectiveness of the EU steps.

Bees collect nectar as they pollinate plants, and over time this sugary liquid accumulates into the thick syrup of honey.

These pesticides, introduced in the mid 1990s, are based on the chemical structure of nicotine and attack the nervous systems of insect pests.

"Overall, 75 per cent of all honey samples contained at least one neonicotinoid," said the study, led by Edward Mitchell of the University of Neuchatel in Switzerland.

The frequency of contamination was highest in the North American samples (86 per cent), followed by Asia (80 per cent) and Europe (79 per cent).

The lowest concentrations were seen in South American samples (57 per cent).

"These results suggest that a substantial proportion of world pollinators are probably affected by neonicotinoids," said the study.

Our planet is home to some 20,000 species of bees, which fertilize more than 90 per cent of the world's 107 major crops.

The United Nations warned in 2016 that 40 per cent of invertebrate pollinators -- particularly bees and butterflies -- risk global extinction.

Experts said that while the findings are not exactly a surprise, the threat posed by neonicotinoids should be taken seriously.

"The levels recorded (up to 56 nanogram per gram) lie within the bioactive range that has been shown to affect bee behavior and colony health," said plant ecologist Jonathan Storkey, who was not involved in the study.

"I therefore agree with the authors that the accumulation of pesticides in the environment and the concentrations found in hives is a serious environmental concern and is likely contributing to pollinator declines."

According to Lynn Dicks, natural environment research council fellow at the University of East Anglia, the findings are "sobering" but don't offer a precise picture of the threat to bees.

"The severity of the global threat to all wild pollinators from neonicotinoids is not completely clear from this study, because we don't know how the levels measured in honey relate to actual levels in nectar and pollen that wild pollinators are exposed to," she said.

The levels of exposure to harmful pesticides may be far higher than what can be measured in honey, said Felix Wackers, a professor at Lancaster University who was not involved in the research.

"This shows that honeybees are commonly exposed to this group of pesticides while collecting neonicotinoid-contaminated nectar from treated crops or from flowers that have come into contact with spray drift or soil residues," he said.

"The actual level of exposure can be substantially higher, as the honey samples analyzed in this study represents an average of nectar collection over time and space."