BBQ safety warning: Bristles from cleaning brush can end up lodged in throat 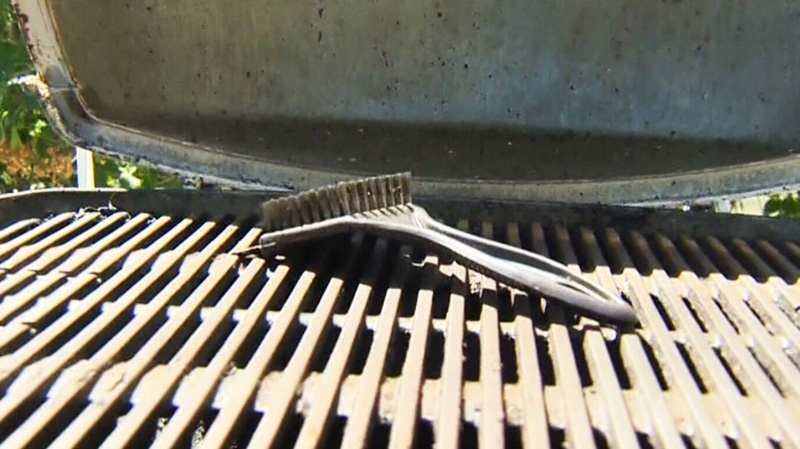 Tania Di Mauro was enjoying a dinner of pasta and barbecued steak with her family when she swallowed a piece of meat and, almost immediately, felt something sharp pierce her throat.

That November incident  resulted into a 12-day hospital stay and two major operations for a Toronto woman. She will have her third operation next month, in relation to severe injuries from swallowing metal fragments from a metal brush used to clean the barbecue grill.

She still has some scarring left behind after previous surgeries. The metal now rests inside her in three pieces: two are lodged in the back of her throat, while another is embedded in the base of her mouth.

With barbecue season in full swing and yet another operation ahead, Di Mauro is warning others about the potential danger that can be hiding on the grill.

“It was a long, hard ordeal,” Di Mauro, a 45-year-old mother of two,  said in an interview.  “I have to get the word out there that something so simple can change your life completely.”

Oshawa, Ont. otolaryngologist Dr. Artur Gevorgyan says there’s growing scientific research on the problem, which is still rare but on the rise.

Gevorgyan has only treated one such patient, back when he was a resident, and the bristle was easily removed in his office, without the use of general anaesthesia.

While these incidents remain rare, they can lead to “significant health problems,” he says. A bristle can pierce the esophagus, cause a potentially fatal chest infection called mediastinitis, or perforate the bowel.

“It’s extremely dangerous to have a two-ended, sharp bristle made out of metal, and potentially very dirty, get lodged anywhere along our digestive tract,” Gevorgyan told CTVNews.ca.

'It has changed my life'

That’s something Di Mauro knows all too well. She was enjoying a dinner of pasta and barbecued steak with her husband and two children last November, when she swallowed a piece of meat and almost immediately felt something sharp pierce her throat.

She tried to clear her throat, which triggered vomiting and a heavy nosebleed that just wouldn’t stop. An X-ray and a nasal scope at Toronto’s Sunnybrook Hospital showed evidence of an abrasion but nothing else, and so doctors sent Di Mauro home.

Two days later, she was back in the emergency room, unable to speak or swallow.

A second scope found a shiny metallic object on top of her epiglottis, the part of the larynx that prevents food from going into the trachea and directs it to the esophagus. Di Mauro was rushed into surgery.

Doctors at first tried to retrieve the wire through Di Mauro’s mouth. But after four hours, surgeons couldn’t get at it through all the swelling. Instead, Di Mauro was kept sedated and moved to the intensive-care unit, where she had more tests, including a CT scan, to zero in on the shard.

A second surgery where doctors cut into her throat was also unsuccessful. After 12 days in hospital, including eight in the ICU hooked up to both breathing and feeding tubes, she has physically recovered but the emotional scars remain.

DiMauro hasn’t been able to enjoy barbecue meals since then.  “I’ve tried to attempt it, two three pieces of whatever we’re making and that’s it. It almost is like my mouth doesn’t even want to accept the type of meat coming from the barbecue.”

She is more cautious when she cooks and when she orders food at a restaurant. And she wakes up in the middle of the night at times, wondering about what her family endured while she was sedated in the ICU.

The barbecue has since been replaced, because her husband could no longer look at the item that was central to his wife’s ordeal. And the family no longer uses a brush to clean the grill: they use a stone and then wipe the whole thing down.

Health Canada has warned of the potential for wayward brush bristles to be swallowed with food, and warns barbecuers “to inspect your BBQ brush before each use and throw it away if you notice that the bristles are loose or stuck to the grill.”

The U.S. Centers for Disease Control has compiled incidents of emergency room visits by patients who have ingested brush bristles, and calls for increased awareness among doctors as a primary avenue of prevention or timely treatment.

“Additionally, awareness among the public, manufacturers who make wire grill-cleaning brushes, and retailers who sell these products can reduce exposures and decrease the likelihood of further occurrences,” the CDC says. The agency urges barbecuers to inspect the grill for bristles before each use and consider alternative cleaning methods.

Di Mauro is urging anyone who likes to barbecue to take every precaution, or risk enduring what she has.

“It has changed my life.”