B.C. man prepares to be first to receive double-hand transplant in Canada 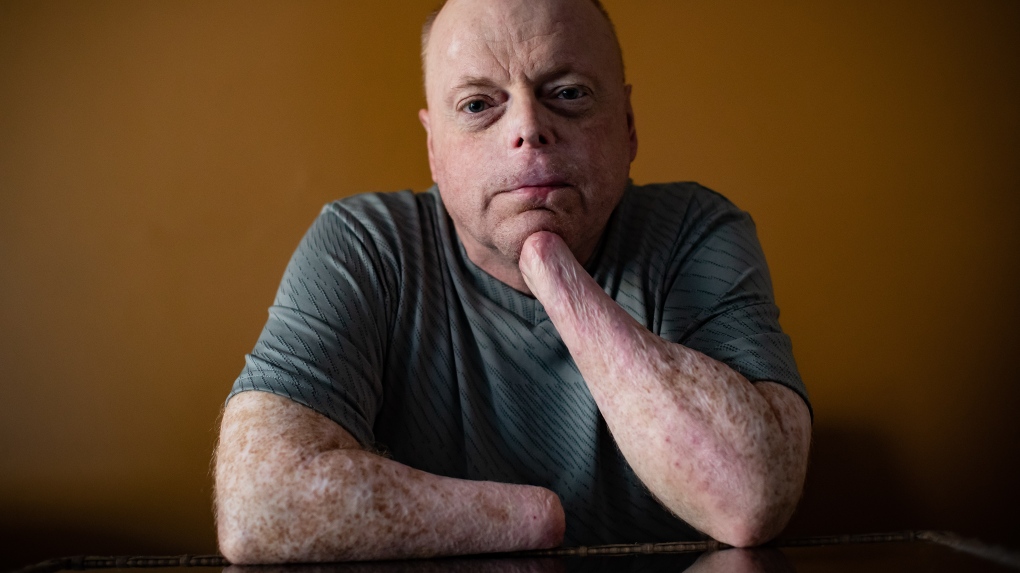 Rick Thompson, who had all of his limbs amputated after contracting bacterial meningitis and septic shock in 2015, poses for a photograph in Coquitlam, B.C., on Monday, March 9, 2020. THE CANADIAN PRESS/Darryl Dyck

VANCOUVER -- When Rick Thompson's doctor told him a surgical team was going ahead with his double-hand transplant in the middle of the COVID-19 pandemic, his first reaction was surprise.

"I was even shocked when (the doctor) told me. I met him last week and I asked him for a ballpark time frame. And he said August, and I said 'Oh, OK.' I wasn't quite ready for that."

Thompson moved to Ontario from British Columbia in April to prepare for the surgery in London. It involves medical and psychological tests, as well as finding a donor.

If things go as planned, Thompson will be Canada's first double-hand transplant patient.

Thompson had all of his limbs amputated after contracting bacterial meningitis and septic shock in 2015.

He left work early one day in May, after feeling like he was coming down with the flu, and decided to sleep it off. A few hours later, he woke up to get a drink of water.

"But when I stood up my feet were like on fire. I could barely walk. I made it downstairs to where my wife Rita was watching TV. And that's pretty well the last thing I remember. I just collapsed on the floor."

He woke up six weeks later in intensive care, confronted with the choice of dying in palliative care or amputation.

"If I wanted to survive, I would need all four limbs amputated," he said.

"In the end, the will to live is stronger than anything else."

After 8 1/2 hours of surgery, doctors had amputated his limbs.

"That was a difficult time, obviously, because you know, you wake up as a different person. You look down and all you see is bandages ... where your hands used to be or where your legs and feet used to be," he said.

"The first thing that came to my mind was, what did I just do?"

After learning about hand transplants two years ago, Thompson met with a team of doctors in Ontario to assess whether he would make a suitable candidate.

"It's life changing," he said.

"Being able to shake someone's hand, being able to pick up a cup of coffee with one hand, write your name with a pen, open a door, you know, just the things that we take for granted every day."

Dr. Steven McCabe, who performed Canada's first hand transplant, may participate in the surgery. He is a hand surgeon at Toronto Western Hospital and an associate professor at the University of Toronto.

The surgery can take 10 to 12 hours with four teams of surgeons. Each team consists of six to 10 people.

While operating on both hands makes the surgery logistically harder because it involves more people, McCabe said it is "logical" to do the two transplants at the same time.

"When you transplant, you're introducing this different tissue," he explained. "And the theory behind that is that you don't want to introduce two different donor tissues."

A person who undergoes a transplant has to take immunosuppressants, so the body doesn't reject the new organ or limb, and it's easier when surgery is done all at once, he said.

"So if you transplanted one limb, and then three months or a year later, the other one, you'd have to go through that again. The idea is to get that all over with one donor."

But there's also another reason.

"Having one hand when you have none is a huge benefit," McCabe said.

"But if you're going to have that type of surgery, and it seems logical to transplant both hands, part of the sense of wholeness is restored. It seems to be very important for patients."

There are risks associated with the surgery, including infections and the possibility of blood loss. But McCabe said the benefits outweigh the risks, and limb transplants have low rejection rates.

After the surgery, transplant patients face a long recovery, he added.

"If you transplant the limb near the elbow, it will take a few months for the muscles to start to work again, and maybe up to a year or more for the nerves to get down to the fingers to have some feeling," McCabe said. "So, I think we would say, you can't judge whether it's really helped or not for at least a couple years."

Thompson said unlike most organ transplants, a hand transplant is visible.

"It's physically there. So getting over the mental challenge is going to be the hardest one, because you know they belonged to someone else at one point and now they're on your body," Thompson said.

"You have to look at it as a gift ... (the donor) family has decided to give you this gift. And it's a gift I'm not going to waste."

This report by The Canadian Press was first published July 11, 2020.