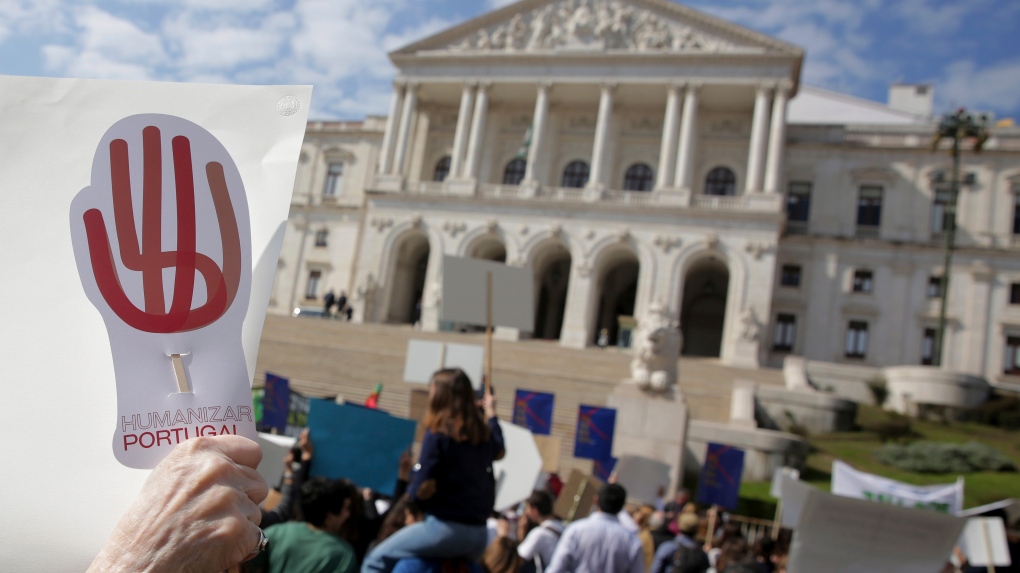 The landmark vote Thursday leaves Portugal poised to become one of the few countries in the world permitting the procedures. However, the country's president could still attempt to block it.

LISBON (AP) --Portugal's parliament debated Thursday whether to allow euthanasia and physician-assisted suicide for terminally ill people, with lawmakers expected to vote to approve the procedures later in the day.

Outside the parliament building in Lisbon, hundreds of people opposed to euthanasia waved banners and chanted "Sim a vida!" ("Yes to life!"). One banner said, "Euthanasia doesn't end suffering, it ends life." Some people held up crucifixes and religious effigies.

Approval of one of the five bills being discussed would leave Portugal poised to become one of the few countries in the world permitting the procedures. But the country's president is known to be reluctant.

President Marcelo Rebelo de Sousa could veto the new law, but parliament can override his veto by voting a second time for approval. The Portuguese president doesn't have executive powers.

The head of state also could ask the constitutional Court to review the legislation; Portugal's Constitution states that human life is "sacrosanct," though abortion has been legal in the country since 2007.

Euthanasia -- when a doctor directly administers fatal drugs to a patient -- is legal in Belgium, Canada, Colombia, Luxembourg, the Netherlands and Switzerland. In some U.S. states, medically-assisted suicide -- where patients administer the lethal drug themselves, under medical supervision -- is permitted.

Ana Figueiredo, a math teacher, became a supporter of euthanasia after her 70-year-old father with terminal cancer killed himself with a gun almost six years ago.

"He was conscious, in deep pain and ... he went on begging his doctors to take his pain away because he was in such a terminal state," Figueiredo said. "It was very sad to see him begging for a dignified death without pain."

The Catholic church in Portugal has led opposition to the procedures, which currently are illegal and carry prison sentences of up to three years. Church leaders have urged lawmakers in vain to hold a referendum on the issue.

In a similar debate two years ago, lawmakers rejected euthanasia by five votes.

Most parties are allowing their lawmakers to vote their conscience, with some expected to diverge from their party line.

"Everyone can be the architect of their own destiny, as long they don't harm others," Moreira said during the debate.

Telmo Correia, a lawmaker from the conservative Popular Party, described euthanasia as "a sinister step backward for civilization." He said none of the parties presenting the legalization proposals mentioned euthanasia in their platforms for October's general election.

In a rare event, each lawmaker will be called, in alphabetical order, to state their vote on each bill, instead of voting electronically. Such a lengthy method is usually used only for landmark votes, such as a declaration of war or impeachment.

The governing Socialist Party's bill, which was likely to earn the most support, covers patients over 18 years of age who are "in a situation of extreme suffering, with an untreatable injury or a fatal and incurable disease."

Two doctors, at least one of them a specialist in the relevant illness, and a psychiatrist would need to sign off on the patient's request to die. The case would then go to a Verification and Evaluation Committee, which could approve or turn down the procedure.

The process is postponed if it is legally challenged, or if the patient loses consciousness, and health practitioners can refuse to perform the procedure on moral grounds. Oversight is provided by the General-Inspectorate for Health.

To discourage people from travelling to Portugal to end their life, the bills all stipulate that patients must either be Portuguese citizens or legal residents.

The Socialist-led coalition government in Portugal's neighbour Spain has also set in motion the legislative steps needed to allow euthanasia.