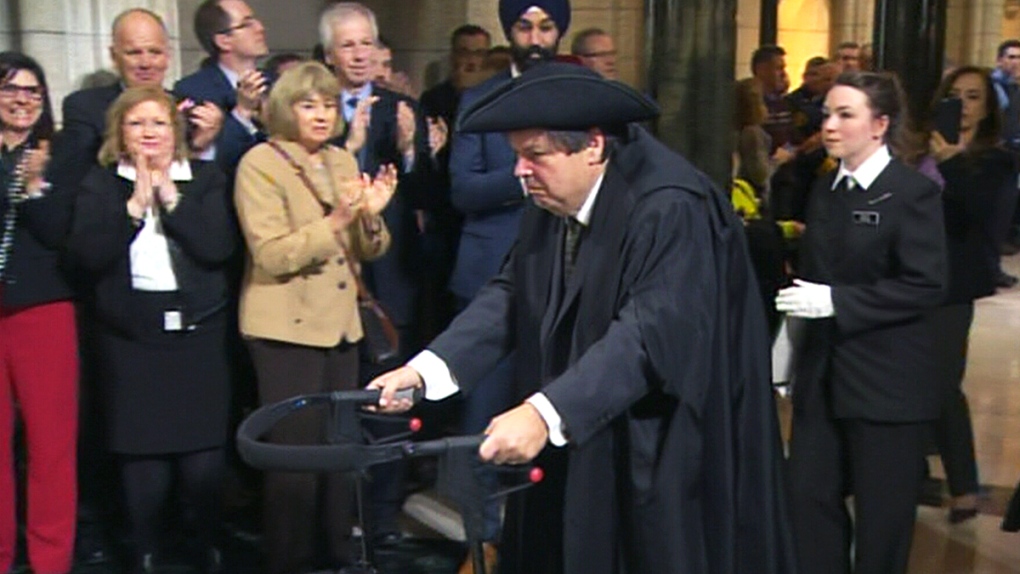 Liberal MP Mauril Belanger is applauded as he enters the House of Commons, on Parliament Hill in Ottawa, Wednesday, March 9, 2016.

TORONTO -- The death of Liberal MP Mauril Belanger has shone a spotlight on one of humanity's most devastating diseases, amyotrophic lateral sclerosis.

While the prognosis for those who develop ALS remains grim -- most die within two to five years after onset of symptoms -- researchers say hopes have never been higher for at least a treatment to slow its relentless progression.

"There's no question the pace of discovery has been accelerated," says neurologist Dr. Lorne Zinman, who heads the ALS clinic at Sunnybrook Health Sciences Centre in Toronto.

A number of genes that underlie inherited cases of the disease have been identified, says Zinman, chairman of the Canadian ALS Research Network.

At any given time, almost 3,000 Canadians are living with ALS, also called Lou Gehrig's disease after the New York Yankees slugger who died of the degenerative motor neuron disease in 1941. Each year, about 1,000 more are diagnosed and an equal number die.

Most people diagnosed with ALS decline rapidly as motor neurons that control voluntary muscle movements are steadily destroyed, leading to an inability to move, speak or swallow.

"All the muscles that you can control are the ones you lose," explains Zinman. "You become paralyzed and basically locked in."

In what seems a cruel twist, neurons that control the heart, digestion and other autonomic functions are left intact, as are sensory nerves that transmit pain or sensations like itching. Cognition for the most part is also unaffected.

"That's why we call it locked in. You're trapped in your body, but you can feel and hear and see everything."

Perhaps the most famous ALS sufferer is British theoretical physicist Stephen Hawking, who was diagnosed with the disease at 21 and has been confined to a wheelchair for decades. Kept alive with artificial ventilation and a feeding tube, the 74-year-old communicates through a computerized speech-generating device, which he controls with a single cheek muscle.

In 2014, ALS Canada raised $17 million through the Ice Bucket Challenge, in which participants had freezing water dumped over their heads to support the charity. Of that total, $11.5 million was directed towards research, with an additional $10 million coming from Brain Canada and the federal government.

ALS Canada CEO Tammy Moore says her organization has so far invested $15 million in research projects across Canada, with the balance to be awarded by 2017.

The other $5.5 million raised is earmarked to help patients and their families, who typically incur costs of $150,000 to $200,000 to care for a loved one as their condition deteriorates.

With an ALS diagnosis, the lives of the patient and their families are suddenly "turned upside-down," Moore says.

"You're going through the progression of one day being able to walk, to having slurred speech or tripping, (and) very rapidly moving through a walker, to a regular wheelchair, to a power-electric wheelchair, to the hospital bed you're going to need in your home, and the ramp to get up your stairs, and the lift to get you in and out of your chair and your bed," Moore says.

Add to that the loss of the patient's income -- and in some cases, that of the spouse who ends up as a full-time caregiver -- and many families are forced to dip into children's education funds or take out home-equity loans "to help people live that short duration they have."

"After the $6 million this year, we're out of Ice Bucket Challenge funds and then we're back to $1.5 million to $2 million annually for research and struggling to do that in a world where charities are seeing lower revenues," says Moore.

And, she concedes, raising public awareness of ALS and generating donations for research isn't an easy sell.

"Unlike cancer -- and not that I would want to compare -- we don't have survivorship. So nobody celebrates the anniversary of the day they got diagnosed with ALS or cured of ALS.

"It is a disease that is challenged by its visibility because as soon as somebody is diagnosed, they start to struggle with mobility issues, so they're not in the public eye anymore."

Zinman says researchers have isolated mutated genes behind ALS in some of the 10 per cent of inherited, or familial, cases, which they hope will lead to further genetic discoveries in the 90 per cent of so-called sporadic cases.

Since 1994, one medication -- riluzole -- has been found to help slow progression of the disease, but its effect is meagre, prolonging survival for only a few months.

Discouragingly, Zinman says there is a graveyard of hundreds of other drugs that have failed in clinical trials to show any benefit.

That's why the hunt is on for an ALS biomarker -- similar in concept to A1C, which measures blood glucose in diabetics -- that would allow doctors to detect the disease early, but also help researchers determine which drugs might best target its effects.

Gene therapy, to overcome the damaging effects of abnormal proteins expressed by mutated genes, is now being tested in patients, says Zinman.

"Have we reached that ah-ha eureka point? No, we're not there yet.

"But there are so many smart people working on this disease now and it has the necessary attention, and all the community is really excited about a breakthrough in the hopefully not too distant future."

And that day is not an impossible dream, he says, pointing out that HIV-AIDS was once a death sentence, but now is typically manageable with antiretroviral drugs that keep the virus in check.

"I tell patients that it's important to be positive and that we continue to battle and we will get there," he says. "I'm an optimist that hopefully one of these days this ALS thing will be a disease of the past."