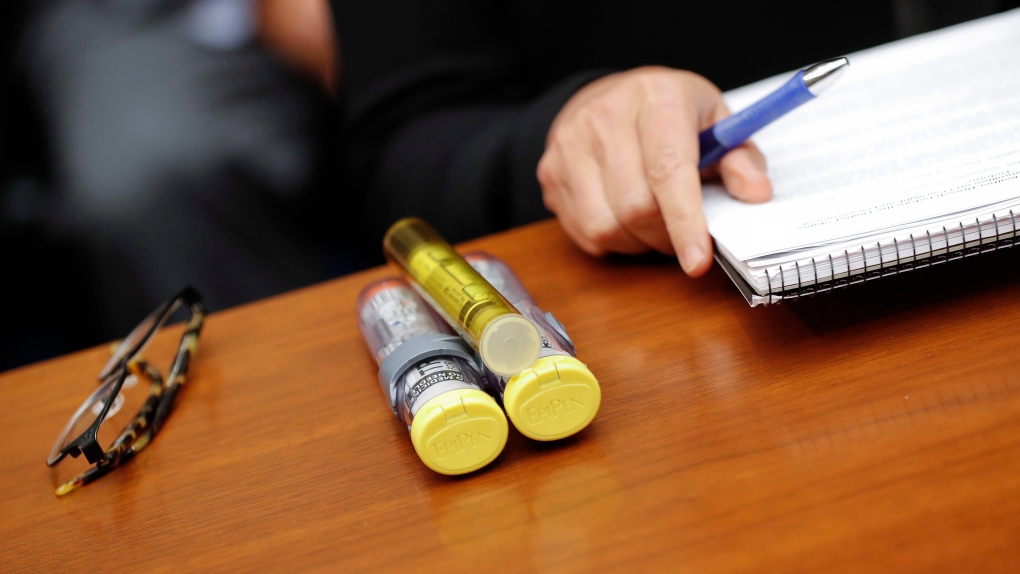 EpiPens are seen in Washington in this Sept. 21, 2016. (Pablo Martinez Monsivais/AP )

Michelle Ferreri is so worried about her 8-year-old son’s peanut allergies, she makes sure he carries an EpiPen epinephrine injector with him in a fanny pack and a backup in his backpack. There’s another one at his school, another at his daycare, one with this grandparents, and a couple more at home.

But what the Peterborough, Ont. mother would really to see is epinephrine injectors available everywhere in public.

“This drug should be accessible in every food court, in every public place,” she says in a video rant on her Facebook page.

“Right now, these are not accessible enough in my opinion. The EpiPen should be accessible just like a defibrillator is, just like naloxone (the drug used to halt opioid overdoses).”

“I’ve heard from a lot of parents who are in a similar situation and wondering the same thing too,” she told CTVNews.ca.

But even when those parents get the backing of political leaders, concerns about costs and worries about lawsuits often bring those efforts to a halt.

An epinephrine injector can mean the difference between life and death to anyone having a severe allergic reaction, which is called anaphylaxis. The medication can quickly decrease swelling, relax the airways, and prevent the release of more allergic chemicals into the bloodstream. Since the recall of Sanofi's Allerject in 2015, the only brand of injector currently in Canada is Pfizer Canada's Epipen.

“This should be accessible and I don’t understand why it’s not,” Ferreri said.

Beatrice Povolo, with Food Allergy Canada (formerly Anaphylaxis Canada), says having epinephrine injectors in more public places makes a lot of sense. She says those with allergies have a responsibility to ensure they always keep their auto-injectors with them, but accidents can happen. Sometimes,  a second dose might also be needed before paramedics arrive.

“They can also be useful in situations where someone has never had a serious reaction before. So, there’s definitely some very positive applications and outcomes and they could potentially save lives,” she said.

“…From our perspective as a patient group, we are supportive of having these devices in public places.”

And yet, only a few communities in Canada have begun to make injectors more available. One of them is the city of Hamilton, Ont. which now has the injectors in city-run rec centres and halls. A Hamilton shopping mall, Jackson Square, also arms its security guards with injectors now, after a local girl died in 2013 in a food court mall from a reaction to ice cream.

The town of Sussex, N.B. too has a program that provides epinephrine injectors in rec centres, schools and even some restaurants.

In fact, that program has been credited with saving the life of a man who had a severe reaction to three wasp stings in 2015.

A good move for business?

But efforts to stock the devices in other communities have often failed.

In the last year, city councilors in Lasalle, Windsor, and Burlington, Ont. have all rejected bids to stock the devices in city-run facilities. This spring, a Toronto city council committee voted to “indefinitely defer” a motion to make the injectors mandatory in the city’s 8,000 restaurants.

City Coun. James Pasternak, who proposed that plan, says he found it “frustrating” that council wouldn’t even look at the issue.

“I’ve been here for seven years and I’m deeply puzzled by this decision,” he said.

Governments are supposed to be in the business of saving lives, he said, and stocking the devices would have come at a small cost and could have saved lives.

“The restaurant industry has to see this as a good business move,” he said.

“Restaurants are required to stock fire extinguishers; those are expensive, they expire. How is this any different?”

Restaurants Canada, a trade group representing more than 30,000 food establishments in Canada, opposed Pasternak’s motion. They said that while they support any restaurant that voluntarily stocks epinephrine injectors, they were concerned about liability and costs if the devices became mandatory.

Povolo says it’s true there are costs to stocking injectors. The devices expire every 12 to 18 months and need regular replacement. They also need to be stored properly and kept at a stable room temperature.

In Hamilton, the local Rotary club in nearby Ancaster stepped in to address the cost issue, helping to launch the project at the Jackson Square mall.

When the city began a pilot project last year to encourage restaurants to stock the devices, restaurant owners agreed to take on the costs themselves.

‘A lack of education’

But it’s those liability concerns that stop many cities from making epinephrine injectors more available, with many worried that cities themselves could be sued if something were to go wrong when the injectors were used.

Dr. Susan Waserman, an allergist and professor of medicine at McMaster University, is helping to study the Hamilton restaurant pilot project. She says it shouldn’t be that complicated to make the devices accessible.

“The sort of things that stand in the way of bringing it in are probably a lack of information and education on the part of people making decisions,” she said.

Using an injector is relatively simple, she says, and it doesn’t take much to train potential users about how to recognize the signs of an allergic reaction.

Waserman says the dose of epinephrine in the injectors is small, and even if the drug is given to someone who doesn’t need it, it results only in symptoms similar to a rush of caffeine.

“You might get a rapid heart rate, you may get a tremor. There are really very few contraindications to giving epinephrine,” she said.

Though adverse effects from epinephrine injections are rare, there are some risks -- as there are with any medication, especially one delivered by needle. There can be heart risks for those with those with heart conditions or diabetes, or those who are elderly or pregnant. And there have been a handful of injuries or infections at the injection site.

If something were to go wrong when a would-be rescuer tried to help someone they thought was having a fatal allergic reaction, they would most likely be protected by the “Good Samaritan” laws in place in most provinces, says Bernard Dickens, a professor of Health Law and Policy at the University of Toronto.

“It’s often said that peril invites rescue, meaning people in peril give implied consent to be rescued,” he said.

Those laws would protect them from most negligence claims. But there remains the possibility they could be liable for gross negligence if they really had no idea what they were doing with the device and managed to harm someone significantly.

There’s no hard red line between common and gross negligence, Dickens says, and many municipalities and their lawyers are likely reticent to be the first “test case” that finds out where that line lies.

“They have to decide if they think the risk of liability or their risk of being sued is sufficiently low,” Dickens said.

He added any municipality or food establishment that agreed to install epinephrine injectors would have to ensure it had staff properly trained on how to use them. In Hamilton, Food Allergy Canada has been offering that training as part of their restaurant pilot project.

But Dickens says food outlets would need to ensure that trained personnel were always on hand -- something that may not always be easy.

Waserman, for her part, believes all these concerns about liability and costs will eventually work themselves out, as municipalities and food providers realize the benefits of doing what they can to ensure those with allergies are kept safe.

“I think stock epinephrine programs are going to be a growing trend,” she said.

“We do have a number of challenges, but in my opinion, the benefits far outweigh the risks.”