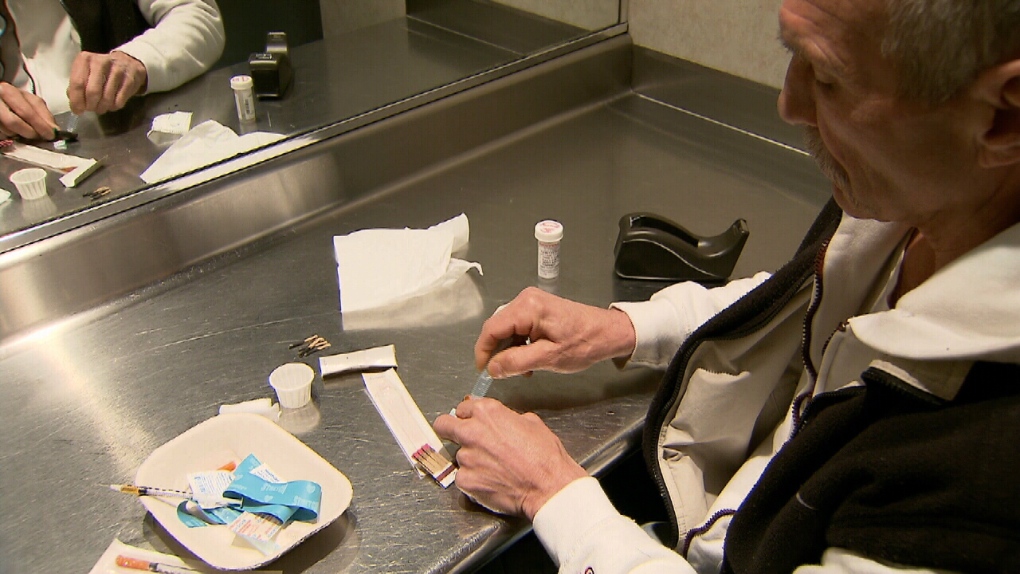 A man is seen holding a needle at a safe injection site in Vancouver in this undated image.

Edmonton and Lethbridge are the first cities in Alberta to get Health Canada approval to offer safe injection sites for opioid drugs.

Alberta Associate Health Minister Brandy Payne said the decision will help reduce a growing number of fatal drug overdoses and the spread of diseases such as HIV.

"Evidence shows supervised consumption services save lives, reduce the spread of infectious diseases, reduce drug use in public and reduce the number of needles discarded on streets and public parks," Payne said Wednesday.

Payne said the sites will also offer health, counselling and drug-treatment services to people who may not have a family physician or live on the street.

Health Canada is expected to make a decision about a safe injection site in Calgary by the end of the month.

So far this year, Alberta has reported 315 fentanyl-rated overdose deaths. There were 586 suspected opioid-related deaths in the province last year.

Four safe injection sites have been approved for Edmonton -- three in inner-city neighbourhoods and one at the Royal Alexandra Hospital.

Karen Turner, of the group Alberta Addicts Who Educate and Advocate Responsibly, said the safe sites are badly needed.

"People who are street-involved are very vulnerable and I have personally known many people who have died of unintentional overdose," she said in a statement. "It is heartbreaking and having access to supervised injection services will help."

The Lethbridge site will be operated by a community organization in the city's downtown.

The southern Alberta city has been dealing with an opioid crisis. Officials have estimated the city has 3,000 drug users and an overdose rate 24 per cent higher than other parts of the province.

The region borders the Blood reserve where a state of emergency was implemented because of fentanyl deaths.

Lethbridge Mayor Chris Spearman said he was grateful for the announcement.

"I want to thank Health Canada and the province of Alberta for recognizing the urgency of the crisis here in Lethbridge and providing a swift approval of the application."

Payne said these sites will open their doors by the end of the year or early in 2018.

"People who are using drugs are using them every day, and sometimes multiple times a day," Payne said. "Having a service close to where they are and close to their community is critical."

The first safe consumption sites in Canada were set up in Vancouver. Health Canada has approved other sites in Montreal and Toronto.

Deaths involving fentanyl more than doubled in the first three months of 2017 compared to the same period in 2016, she said.