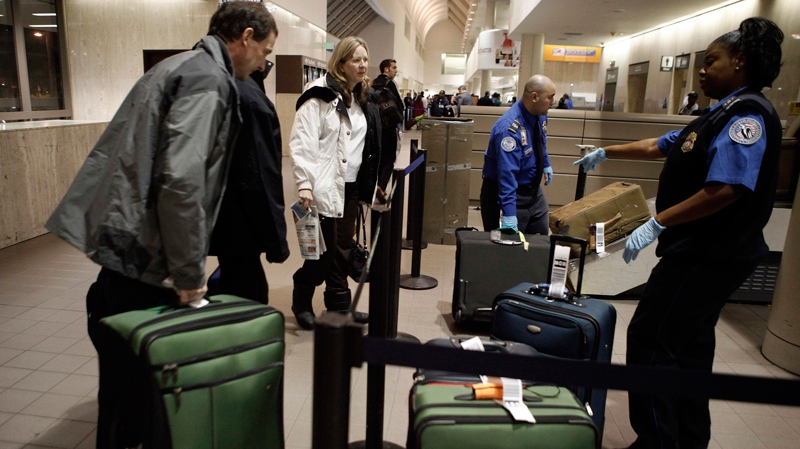 TORONTO -- A new study suggest airport screening for disease control rarely makes sense, but if it's undertaken, it should be done at the source of the outbreak.

The researchers say the screening of passengers leaving via a few key airports near the epicentre of an outbreak is a better approach than having hundreds of airports around the world screen arriving passengers.

The research is based on a study of air travellers departing from Mexico in the early days of the 2009 H1N1 flu pandemic.

And it holds particular resonance right now because the world is watching China to see if a new bird flu virus infecting people there will trigger a pandemic.The new H7N9 virus has sickened 33 people to date, killing nine of them -- but so far no cases have been found outside China.

"In most situations, screening doesn't make sense. In a handful of situations, it may be justifiable," says Khan, an infectious diseases specialist at Toronto's St. Michael's Hospital.

"And if you are going to consider screening, doing it as people leave the source area is a much simpler and a much more efficient way of doing it than when people arrive."

But Khan says deciding to do exit screening rather than arrival screening would pose some challenges, because most quarantine systems are set up to prevent infected people from entering a country and don't have mechanisms in place to monitor outgoing passengers.

For instance, custom and passport control operations at most international airports are located in arrival areas, and have no contact with departing passengers.

As well, the benefits of exit screening wouldn't be enjoyed by the country doing the screening, but rather countries receiving travellers from the source country. That means a country already battling an outbreak would have to take on the added burden of doing screening that would only protect other countries.

Many countries used health screening of international passengers during SARS, trying to prevent new cases of the disease from entering their borders. But studies done after the fact suggested thermal screening systems and self-reported health status declarations were not really effective.

It's not really surprising. Many diseases -- influenza is a prime example -- have a period after infection and before onset of symptoms when people who are becoming sick are actually infectious. So before people develop fever, before they starts to feel ill, they can spread their sickness to others. Screening systems cannot catch those types of people.

And the early stages of infectious disease outbreaks often take place under the radar. In the spring of 2009, the world learned that a new flu virus had emerged from Mexico when cases were found in the United States. The disease had already crossed borders; the horse was out of the barn.

For this study, Khan and his colleagues looked at the flight itineraries of international travellers arriving in and leaving from Mexico in the early spring of 2009, as the H1N1 pandemic was taking off.

They saw that using exit screening at six airports in Mexico and at two international airports -- Shanghai, China and Tokyo, Japan -- would have assessed 90 per cent of the passengers who could have been carrying the new flu out of Mexico.

Shanghai and Tokyo were included because they are the destinations with the longest direct flights from Mexico, 17 and 20 hours respectively. Khan says those flights were sufficiently long that people who were incubating flu on departure might actually have started to feel sick on arrival.

The authors said screening passengers from Mexico at other international airports wouldn't have made sense, because the chances of catching infected people among the tens of thousands of other passengers were so low.

Trying to prevent the cross-border spread of infectious diseases is the aim of a global treaty called the International Health Regulations; the IHR, as it is called, is overseen by the World Health Organization.

The regulations require countries to report the spread of diseases that might threaten other countries, and to try to minimize the risks they pose while at the same time trying not to disrupt the international movement of people and goods.

Some countries may interpret their responsibilities under the IHR as requiring them to take actions like arrival screening during outbreaks.

"Whenever these occur, countries around the world start asking themselves whether or not they should implement measures to screen travellers," Khan says.

"There may be public pressure. There may be political pressure to implement screening. But those decisions are often made on perception of risk and not based on actual measures of risk."

"A lot of times countries are making these decisions and they are highly disruptive to international air travel, they have very important consequences to the world's economy and they are not generating any meaningful public health returns."

Khan and his colleagues developed a decision tool countries can use during outbreaks to decide whether they should implement screening. It involves three simple questions, he says.

Is the country where the outbreak started doing exit screening? If it is, there's almost no need for others to do entry screening, he says. Likewise, if a country does not get direct flights from the outbreak source, screening doesn't make sense.

If the outbreak country isn't doing exit screening and a country does get direct flights from it, then officials could reasonable debate whether they felt screening was a good use of their resources. In most cases, Khan says, deciding to do it or not to do it would both be justifiable choices.