Since abortion was decriminalized in Canada in 1988, it has long been considered that Canada is an abortion-friendly country for women around the world.

However, decriminalization of abortion has not ensured abortion equity or necessarily improved access, experts say.

“As a country, we say we are pro-choice and that we care. But to be pro-choice, we need to be able to offer the choice in the first place,” says Frederique Chabot, the director of domestic health promotion at Action Canada for Sexual Health and Rights.

A 2016 UN Human Rights Commissioner's report noted a lack of access to abortion in Canada and called on the government to redress inequities, and since COVID-19 ravaged the country’s health-care systems, waiting lists for almost all services including abortions have become beyond sustainable.

“There is a serious capacity issue that is not being talked about,” says TK Pritchard, the executive director of the Kitchener-based SHORE centre, a non-profit that offers sexual and reproductive services to women.

“With clinics being overrun, folks not having access to a family doctor … if you're outside an urban centre, it does mean that abortion is not accessible for a lot of people. And it's definitely time that we stop pretending that it's accessible in Canada,” he said.

Compounding long waiting periods are four main access-to-abortion issues in Canada that can be boiled down to geography, knowledge, equity and immigration status.

ABORTION ACCESS DEPENDS ON WHERE YOU LIVE IN CANADA

According to a 2006 report published by non-profit charity Canadians for Choice, geography is directly linked to the accessibility of an abortion and that barriers exist despite “the fact that abortion is generally a simple procedure that any hospital with an obstetrics ward can be equipped to conduct.”

Those living in rural areas in Canada continue to face obstacles in having an abortion, says Pritchard.

“Most abortion providers are located less than 150 kilometres from the southern border and typically only one in six hospitals offers abortion services,” he said.

“So if you're outside of those areas, it can be really hard to find an abortion provider. And that can be true for surgical abortions as well as long-term medication abortions. Too many women have to leave and travel for care.”

Pritchard said when one starts to factor in the financial strain related to the costs of transportation including accommodation, childcare, elder care, lost wages, and possibly even the procedure itself, abortion services become more and more out of reach for Canadian women who don’t live in urban areas.

Chabot says it "really is an infrastructure issue."

“There are so many maternity wards that were closed during the pandemic because there's no staff, no resources and no money so people had to drive three hours to give or terminate birth and so there is a real need of investing in sexual and reproductive health infrastructure,” she said.

Access also depends on which province women live in.

In New Brunswick the government only funds abortions at three hospitals, meaning patients who do not live in either Bathurst or Moncton need to travel for the procedure.

There are 11 abortion clinics in Ontario, with nine located in the Greater Toronto Area and the remaining two being in London and Ottawa. Abortion clinics do not exist far from the Canada-U.S. border, with the highest number of abortion providers found in the province of Quebec.

Experts argue that the uneven distribution of clinics in provinces across the country leads to inequitable access to abortion for many Canadian women. 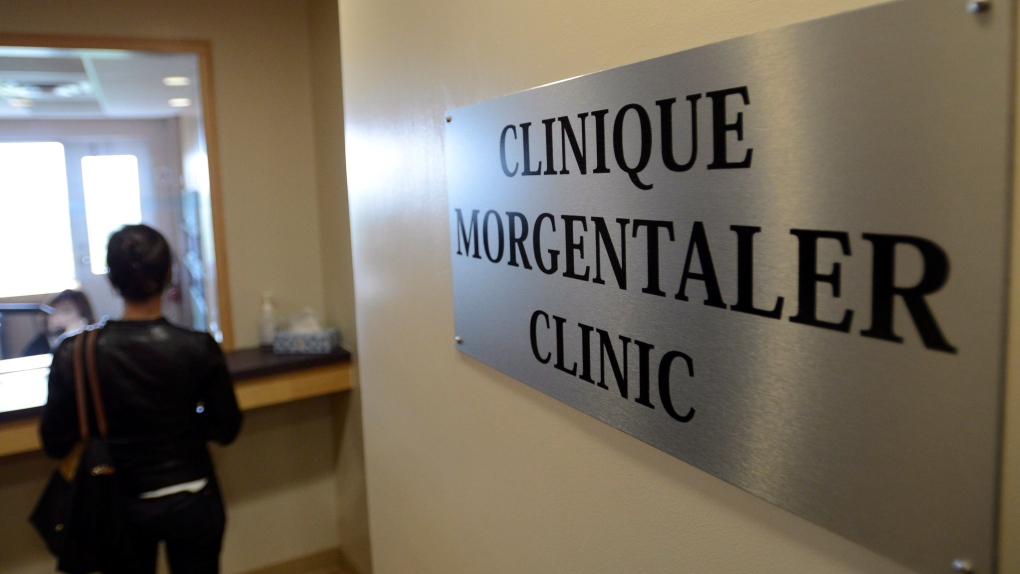 A woman enters the Morgentaler clinic in Montreal, Wednesday, May 29, 2013. (THE CANADIAN PRESS / Ryan Remiorz)

ABORTION ACCESS LIMITED TO WOMEN WHO ARE AWARE OF AVAILABLE SERVICES

In Canada, abortion health services are not publically advertised and the main mechanism to find care is through the guidance of a primary care provider or via individual research.

According to an abortion law paper published by the University of British Columbia in 2019, many patients remain unaware that abortion services do not require a referral.

The paper suggests that this lack of knowledge can be taken advantage of by some providers who hold a conscientious objection and “may delay referral, order unnecessary tests, or refuse to refer or see a person requesting an abortion.”

The problem goes deeper among women who are uninsured due to their immigration statuses, or women who are part of low-income groups.

“So as providers ourselves, advertising one’s services … is an ethereal problem in abortion care,” said Shezeen Suleman, the midwife team lead and abortion provider at South Riverdale Community Health Centre in Toronto.

"From the provider perspective we have to balance our own safety and the possibility of alienating some users of our service, with the undeniable need for people to know where to seek care. We ultimately decided to talk openly about this service offering, sharing it on our website and with the networks to which we belong and with each client coming for pregnancy care with our team."

Suleman says her health-centre provides abortion and reproductive services to uninsured women and women from low-income backgrounds, including additional services like ultrasounds and blood tests.

Access to abortion is even harder for the uninsured, she said, with the added burden of bearing the whole financial cost in the majority of cases and navigating a complex care system to even get care. But despite that, she says that people find care because they are resourceful.

“You survive here by talking to other people who might know and you build networks that are informal, and you talk to your friends and family and your co-workers and that's how you gain access to stuff,” she said.

“It's never out in the open, especially not for these people. But they're very, very resourceful.”

As Canada continues to remain a hub for immigrants and refugees all over the world, there have been growing concerns about inequitable health-care access for them.

A 2020 University of Montreal study concluded that 50 per cent of immigrants “without health insurance perceived their health as negative,” with a “high rate of unmet health-care needs among migrants with precarious status.”

“One of the major problems for anybody needing an abortion without medical insurance is the cost,” said Lindsay Larios, assistant professor at the University of Manitoba, who studies immigration and reproductive policies.

“It really depends on, you know, the stage of the pregnancy that the person is in, or sometimes the location or the city. But we're really looking at costs that range about like $600 to $2,300 to get abortion care,” she said.

Larios says that a whole host of residents in Canada fall under the uninsured category.

“So there's a real risk for anybody without permanent residency could kind of fall into this category,” she said.

According to a study published by Action Canada for Sexual Health and Rights in 2019, no providers in Canada offer abortion services more than 23 weeks and six days into a pregnancy.

Those who are this far into their pregnancy and looking for an abortion often travel to the United States for the procedure instead, which could be in jeopardy should Roe v. Wade be overturned.

“There's still a really big need for clinics and hospitals that offer care until a later time in the pregnancy,” said Chabot.

“This option to go to the U.S. for a delayed pregnancy abortion is really reserved for those who can afford it. People end up having to pay for plane tickets, for hotels, they have to make sure they have enough food.

Travelling to the United States also means that people have to pay passport fees.”

“Racism in the health-care system is also a barrier that women who are seeking abortion care are facing,” she said.

Prime Minister Justin Trudeau, long a self-proclaimed defender of progressive values, promised this week to protect the ability of Canadian women to safely and legally obtain an abortion, though a clear plan wasn’t offered.