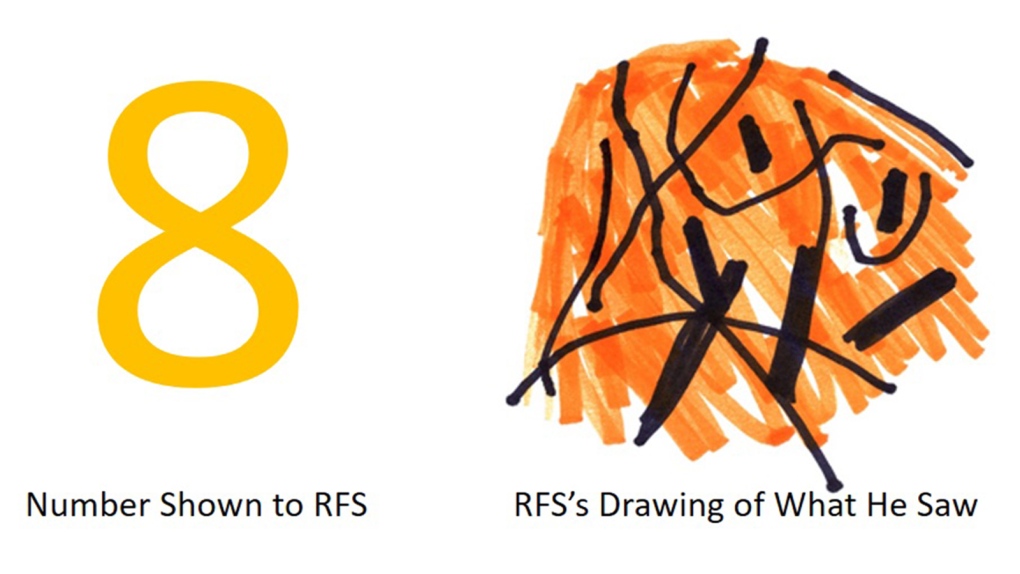 RFS is unable to see the digits two through nine. In their place, he reports seeing 'spaghetti'-like symbols that change every time they appear. (Johns Hopkins University)

TORONTO -- The case of an American scientist who lost the ability to see most numbers may upend longstanding beliefs about how humans perceive what they are viewing.

The man's incredible story, believed to be the first of its kind ever documented, is detailed in newly published research that explores the eight years researchers spent attempting to understand what is happening in the brain of the man identified only by the initials RFS.

RFS first came to the researchers' attention in 2011. As they put it, he was a 60-year-old, left-handed engineering geologist who "was completely unable to recognize, name, copy or comprehend the digits 2-9," either on their own or when they appeared as parts of larger numbers.

"He described the appearance of these digits as a tangle of black lines with no discernible relationship to any recognizable shape," the researchers wrote.

It did not matter how large or small the numbers were, how long RFS looked at them or from what angle. No matter what he or others tried, the Arabic digits two through nine only appeared as unrecognizable shapes he referred to as "spaghetti" – a tangled mess that took a different shape every time it occurred.

He was still able to perceive letters, for the most part. M, N, P, R, S and Z would occasionally appear distorted, but not often enough or severely enough to stop him from being able to identify them.

The digits zero and one were also fine, perhaps because of their similarity to the letters O and I. RFS had been able to keep working, too, by either writing out the other numbers two through nine in letters or using Roman numerals, which he reported being able to see with no issues.

The ultimate cause seemed apparent to the researchers. An "acute neurological event" in 2010 had left RFS with temporary vision loss, as well as more permanent effects on his memory and speech. By the time he started working with the researchers, his symptoms included phantom touch, involuntary muscle spasms and difficulty walking – all of which worsened over time. He was diagnosed with corticobasal syndrome, a rare and degenerative brain disease.

For the next eight years, researchers at Johns Hopkins University, Harvard University and other institutions performed tests on RFS to try and determine exactly why corticobasal syndrome had left him unable to see the digits two through nine.

As they wrote in the paper published Monday in the Proceedings of the National Academy of Sciences, they found incredibly consistent results.

Adapting scientifically accepted tests of visual awareness to the specific situation of RFS, asked RFS to identify various symbols that they had embedded in larger letters and numbers, for example a dollar sign inside an outline of the number three.

No matter what they used – typographic symbols, faces, common shapes – RFS was able to identify 99 per cent of them when they were embedded in a letter, a zero or a one. When they were embedded in a different numeral, though, he reported that he could not see them because the "spaghetti" had taken over. When told the symbol could be one of two possibilities and forced to choose which he thought was embedded in the number, RFS got it right 49 per cent of the time – about as much as would be expected if left to random chance.

Even when RFS was unable to see the numbers or the symbols embedded within them, though, the researchers found evidence of "complex cognitive processing" taking place in his brain – the same brain activity that would have been happening had he been able to see properly. This gave them a clue as to where the problem might really be.

WHAT COULD IT MEAN?

The research team found that although there had never been a documented case of a symptom similar to the one displayed by RFS, it was "strikingly analogous" to a better-understood condition: selective face metamorphopsia, which alters a patient's perception of faces.

Although we don't know exactly how the brain's cognitive and neural systems work together to create visual awareness, it has been established that it involves ultra-quick processing of many factors. In distinguishing between the letter O and a zero, for example, the brain will consider not only the shape but also the context in which it appears, for example whether it is around other numbers or letters.

When RFS looks at a digit between two and nine, though, the researchers say it's clear that something is going wrong in this processing and integration process, leaving him with an "uninterpretable" result. They believe the corticobasal syndrome somehow affected the signals that travel between the parts of his brain responsible for perceiving visual information and those responsible for translating it into something understandable.

How exactly that happened, and why it would only affect the digits two through nine, remains to be determined.

"To our knowledge, our study is the first to report a complete lack of awareness for the identity of stimuli that nevertheless elicit a pattern of neural processing typically found with awareness," they wrote.

"Our findings suggest that the relationship between the cognitive processes necessary for recognition and conscious awareness is more complex than previously understood, requiring a re-examination of theories of visual awareness."

As for RFS, the researchers helped him develop a set of "surrogate" digits – placeholder symbols that he was able to see and could use as replacements for two through nine.

With these surrogates in place, he was able to keep his job until his retirement in 2014. He still uses them when he has to jot down phone numbers or other numerical information, and his computer has been specially modified to display them as well.