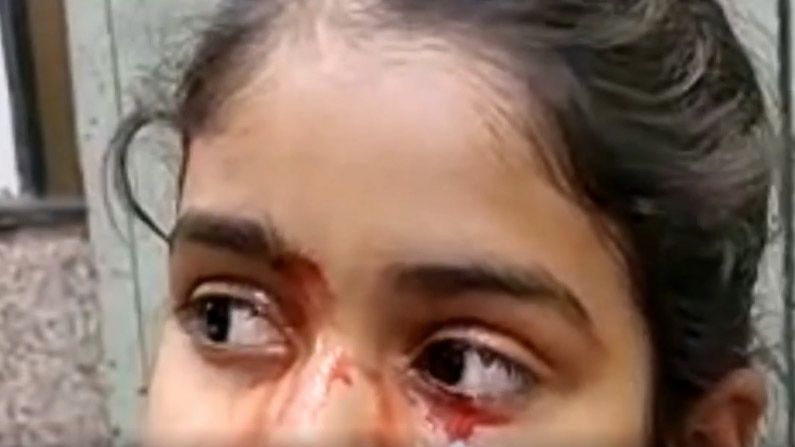 A screenshot taken from a video of the 11-year-old girl leaking bloody tears. (BMJ Case Reports)

TORONTO -- An 11-year-old girl was admitted to hospital in India, seemingly healthy except for one issue: she couldn’t stop crying blood.

The extremely rare condition was described in a case study published June in BMJ Case Reports, written by researchers with the All India Institute of Medical Sciences in New Delhi.

The authors explained that the child’s mother had brought her to hospital after the child had spent the past week leaking blood-tinged tears two to three times a day.

It was clear she was suffering from “one of the most alarming and rare conditions,” the report said: haemolacria, when there is blood found in tears.

But why was it happening?

The child appeared perfectly healthy and had 20/20 vision. Eye examinations showed nothing wrong with the physical structures of the eyeball. The lacrimal gland -- which secretes tears -- was also normal.

Doctors held the child for observation for two days, and witnessed the bouts of blood-tinged tears coming on several times a day.

For around three minutes at a time, the reddened tears would leak out of her eyes and down her cheeks.

Curiously, she was not actually “crying” blood. The case report describes these bouts of bloody tears as occurring spontaneously, without being triggered by any strong emotion, the way crying normally is.

Her blood was studied to see if she had any issues with blood clotting, unusual blood cell counts, or poor liver function. Everything seemed to be normal. When the tears themselves were tested, researchers found red blood cells, but nothing else that shouldn’t have been there.

After doctors had tested for everything they could think of, and found no trace of other illnesses or physical issues, they declared the origins of the condition to be idiopathic. The term means that no direct cause of the haemolacria could be found.

In other words, researchers still have no idea why this 11-year-old keeps leaking bloody tears.

It’s a diagnosis of exclusion, which can only be given once all other options have been exhausted.

So few cases of haemolacria have been recorded that it is unknown whether it affects certain ages or genders more.

There can be numerous causes, such as head injuries, tumours in the eye, bleeding disorders, and endometriosis, among other causes. In very rare cases, haemolacria can be caused by Munchausen syndrome, according to the report, which is a psychiatric condition where a person consistently makes up or exaggerates illnesses they have.

Haemolacria was first mentioned in a medical book written in the sixth century. Then, in the 16th century, it popped up again.

The case report said there had been a case of a nun who bled from her ears and eyes “every month instead of menstruating.”

“Later in 1581, a 16-year-old girl was cited by Dondonaeus who had drops of bloody tears instead of menstrual discharge,” the report said.

The 11-year-old studied in this case report had not begun menstruation, according to the report.

While haemolacria is benign in itself -- doctors don’t believe it will cause any other detrimental effects to the child -- it is often associated with larger diseases or deficiencies, such as haemophilia.

In the report, her mother was quoted as saying she was “scared” for her daughter’s health.

“The blood coming from her eyes is horrifying. I hope there will not be any similar episodes in future,” she said.

The report said that the family had been briefed on the condition and that doctors would be following up with the child to track any changes.