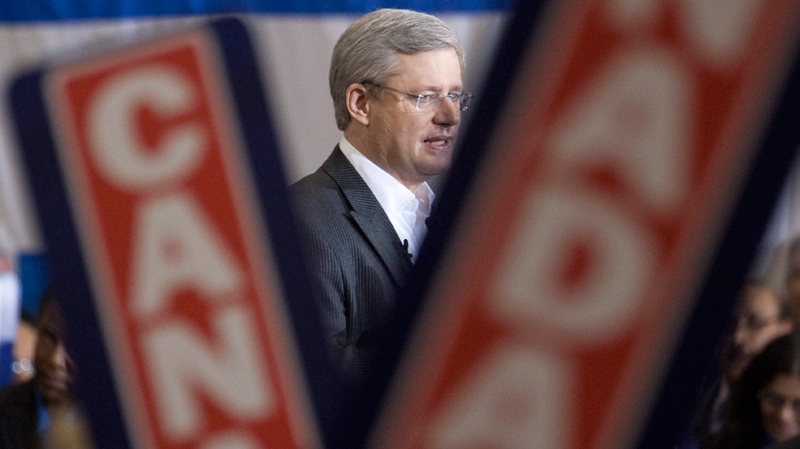 OTTAWA - There's nothing like a serving of pork and patronage on the election trail.

Prime Minister Stephen Harper is making no apologies for hundreds of Conservative patronage appointments as he campaigns through Atlantic Canada.

A Tory hiring binge at the Atlantic Canada Opportunities Agency has sparked an investigation by the Public Service Commission of Canada in response to a Liberal MP's complaint.

Harper, asked about the issue Thursday in Halifax before he flew on to Newfoundland, shrugged it off as a non-starter.

"We base our appointments first and foremost on qualifications."

The Liberal campaign quickly extrapolated the prime minister's math to suggest that Conservative partisans have snapped up more than 1,500 of some 4,700 Harper government appointments over the past five years.

The Liberals are reminding voters that Harper shelved his 2006 election promise of an independent appointments commissioner after his first choice for the job -- a prominent Conservative fundraiser -- was rejected by the opposition.

Considering the rich and well-chronicled Maritime history of patronage and pork-barreling -- both Liberal and Conservative alike -- Harper's frank assessment of his record was likely well considered.

Former Conservative prime minister Brian Mulroney was famous for stating "you dance with the one that brung ya," while former Liberal cabinet ministers such as Allan MacEachen and David Dingwall were renowned Atlantic "godfathers" who funneled money and jobs to constituents.

With over a third of the seats in the House of Commons at dissolution and about a third of the popular vote in the last election, Harper's Conservative patronage math is proportional to his party's parliamentary presence.

Now gunning for a majority, Harper headed for Newfoundland and Labrador in his mission to regain seats lost in 2008.

On his way there, he said the Lower Churchill power project could play an important role in Canada's climate-change strategy.

"This is a very important project, not just for Newfoundland and Labrador, for Nova Scotia, for the entire region," Harper said in Halifax.

"It is a big chance to shift an entire region of the country towards greener energy and away from large-scale greenhouse gas emissions.

"So this has the potential of being a very important part of our efforts to fight climate change in Canada."

The Tories were shut out in Newfoundland and Labrador in 2008 and won just 10 of 32 seats in Atlantic Canada.

Liberal Leader Michael Ignatieff started his day in Winnipeg, where he attended a day care to promise up to $1 billion for child-care funding for provinces.

"We want to get this done as quickly as possible," Ignatieff said, pointing to the next federal budget and this summer as possibilities.

The money would not be the kind of national day-care program promised by past Liberal governments, he said. He said it's simply a fund that provinces could apply to in order to expand day care spaces.

Harper wants to warm up relations with Newfoundland in particular. Things chilled to iceberg levels under former premier Danny Williams, who pushed an "anybody but Conservative" campaign in 2008.

A thaw seems to have continued with the arrival of Premier Kathy Dunderdale. Several of her cabinet ministers have been seen at Tory nomination meetings in this campaign.

She had harsh words for Harper in 2008, but now says times have changed.

A helping hand for the Churchill hydroelectric project and the undersea power cable linking it to consumers in Nova Scotia could offer a boost to Harper's Tories.

The proposal to ensure that the Muskrat Falls project goes ahead has been resisted by Quebec Liberal Premier Jean Charest, who has argued that federal cash assistance would be an unfair subsidy.