Hadfield's sights set on lofty goal from a young age 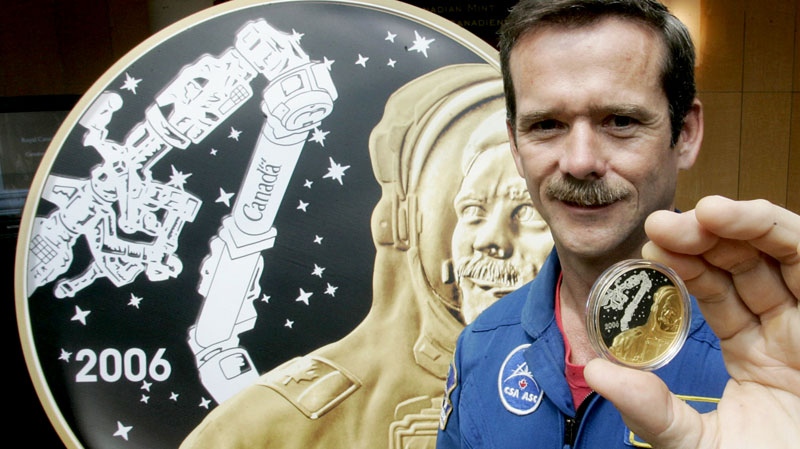 Canadian astronaut Colonel Chris Hadfield shows off a newly minted coin with his likeness commemorating the fifth anniversary of his, and Canada's, first space walk by a Canadian at the Royal Canadian Mint in Ottawa, Wednesday, May 31, 2006. (Hanson / THE CANADIAN PRESS)

Canadian astronaut Chris Hadfield has had his sights set on a lofty goal from a very young age.

From the time he was a teenager his dream has always been space travel, and he's always worked hard to achieve it, explained Hadfield's older brother Dave, a folk singer and commercial pilot from Barrie. Ont.

"He oriented his life towards what was the wild possibility in those days, the extremely unlikely possibility of becoming an astronaut back when he was about 15, when we joined Air Cadets," Hadfield told CTV.ca from Barrie, Ont.

"As you go through life there are forks in the road and he always took the one that could possibly lead to space."

Hadfield, who has been to space twice, was named this week as the first Canadian astronaut to take command of the International Space Station. He will do so during the second half of a six-month mission that begins in December 2012 when the crew departs on a Russian Soyuz rocket.

He previously travelled to space as a mission specialist in 1995 and 2001, but the 2012 mission will be the longest and will involve the greatest amount of responsibility for Hadfield -- and for any Canadian thus far.

As commander, he will be responsible for the safety of the crew, operations, maintenance and equipment, as well as the overall success of the mission.

It's the culmination of his life's work, Hadfield said Friday from Montreal.

"For a little Canadian kid growing up dreaming that maybe someday there's a chance a Canadian might fly in space, this just surpasses all the hopes and dreams of one Canadian kid," he told CTV's Canada AM.

'Ready to take on the world'

The appointment doesn't come as a surprise to those who know Hadfield -- or who crossed paths with him as a young man.

Ron Sadler, a warrant officer with the Canadian Air Force, remembers strapping Hadfield into CF18 fighter jets when he was a young captain, new to the squadron at CFB-Bagotville back in the mid-1980s.

Even then, it was clear Hadfield had a bright future.

"He was a pretty relaxed guy, keen, eager and ready to take on the world," Sadler, a mechanic who performed maintenance on the jets, told CTV.ca.

"I remember sitting around talking with the other guys about this young captain and saying he's going to go places. He had his head screwed on straight, as we say, and knew where he wanted to go and who he wanted to be."

'He has a way of capturing people's attention'

Dave Hadfield said his brother is well prepared for his new challenge, largely due to his "hardware" skills and his abilities as a communicator.

Hadfield has flown test missions and done experimental piloting work that has won him numerous awards and trophies -- a skill that will come in handy on such a technical mission.

His ability to get a point across will also prove to be invaluable, Hadfield said.

"He has a real way of capturing people's attention and getting through to them, whether they're in kindergarten sitting on a school floor, or people in a press conference, or politicians," he said.

Hadfield's fluency in Russian and his cultural understanding of the people and place will also prove an invaluable asset on the mission as he serves as a bridge between NASA and Moscow, his brother said.

A lieutenant-colonel at the time, Hadfield came to speak to trainees at CFB-Borden in 2003 while Sadler was there. He said he was stunned by the astronaut's ability to hold the audience's attention during his two-hour address.

During the talk, Hadfield touched on issues he knows well -- setting goals, planning a career and achieving dreams.

"They were on the edge of their seats the entire time he was talking, he had them, he drew them in, he drew me in," Sadler said.

"It was a two-hour session but it seemed like we were in there for 10 minutes because he just captured us. He's an extremely good speaker."

As for the challenges of the upcoming mission, Hadfield said his brother will likely struggle with the monotony of having to exercise two to three hours each day in the zero-gravity environment.

The Hadfield clan -- whom Dave describes as "children of the planet" -- is used to being spread out around the world on various adventures, so the separation won't be a huge challenge for Chris or his loved ones.

What will be stressful for the family, he said, is watching the lift-off -- something they did as a family on the two previous flights.

"The most serious moment of concern is always during a launch," Dave said. "When you observe the shuttle taking off, it's one brutal, violent, powerful thing. It's a visceral explosion that throws this thing, just barely contained, off the Earth. That's not very comfortable to watch."

Hadfield, who is married with three grown children, has a long list of accomplishments to his credit. The native of Milton, Ont. was chief of robotics for the NASA Astronaut Office in Houston, Tx. from 2003 to 2006 -- a skill that may come in handy if he is called to operate the Canadarm2 while at the ISS.

He has served in various other roles with NASA, including as the voice of mission control to astronauts in orbit, for 25 missions.

He also held the position of chief astronaut for the Canadian Space Agency from 1996 to 2000.

Though Hadfield's accomplishments are extensive, his brother said the family still considers the latest accomplishment worthy of celebration.

"It's big news," he said. "We had an idea it was coming of course but it affects all of us in a very positive way. It's a wonderful reflection on his abilities and you can't help but share in that. We all came from the same farm, from the same neck of the woods, so to speak."