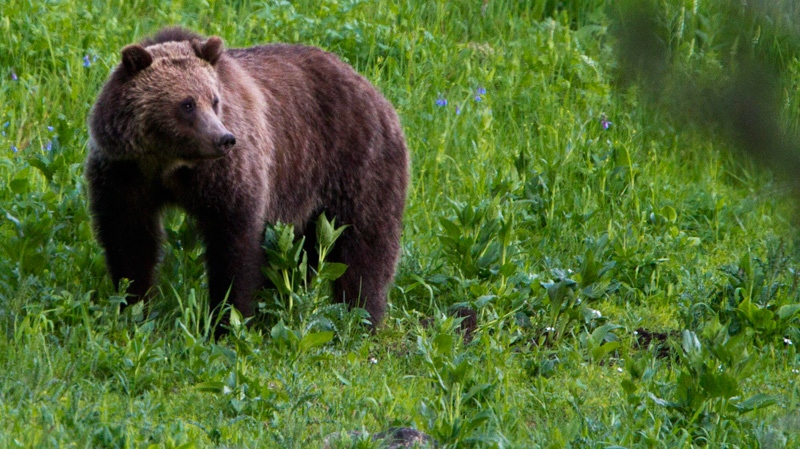 YELLOWSTONE NATIONAL PARK, Wyo. - Rangers blocked tourists from visiting one of Yellowstone National Park's most popular destinations Thursday as authorities hunted for a female grizzly bear in the area that mauled a backcountry hiker to death.

It was the first fatal grizzly attack inside the park in 25 years -- but the third in the Yellowstone region in just over a year.

The attack occurred in an area that is one of Yellowstone's top attractions, and busloads of tourists normally gather there to take in the view from Artist Point, one of the park's most iconic. A stunning waterfall drops hundreds of feet in the canyon, and trails along both canyon rims are normally crawling with tourists.

The identity of the 57-year-old victim was being withheld until his family could be notified. His wife escaped serious injury, park officials said.

Park spokesman Al Nash said the couple saw the bear twice on their hike. The first time, they continued hiking. The second time, the grizzly charged them and the man told his wife to run. She called for help on her cellphone, and other hikers in the area responded to her cries.

The woman told park officials she didn't see the bear attack her husband. When the bear went for her, Nash said, she dropped to the ground. The grizzly lifted her off the ground by the day pack she was wearing, then dropped her. The woman may have had scrapes and bruises but didn't seek medical attention.

Yellowstone and surrounding areas are home at least 600 grizzlies -- and some say more than 1,000. Once rare to behold, grizzlies have become an almost routine cause of curious tourists lining up at Yellowstone's roadsides at the height of summer season.

Some visitors said they didn't know about the attack. Tourists staying at a campground in nearby Canyon Village said no rangers or park personnel told them about it.

Pavel and Igor Srom, visitors from the Czech Republic, said they saw groups of people hike around the barricades early Thursday. They stopped when a passing maintenance worker told them a bear had been seen, and park rangers soon arrived to turn away everyone.

Officials closed backcountry campgrounds in the area. The Wapiti Lake trailhead has a bear warning sign.

While lamenting the death, officials said they didn't want to overemphasize the danger to visitors.

"This is a wild and natural park," said Diane Shober, director of the state Wyoming Travel and Tourism agency. "At the same time, the likelihood of this happening again is small."

It was the park's first fatal grizzly mauling since 1986, but the third in the Yellowstone region in just over a year amid ever-growing numbers of grizzlies and tourists roaming the same wild landscape of scalding-hot geysers and sweeping mountain vistas.

Tourists have been flooding into Yellowstone in record numbers: 3.6 million last year, up 10 per cent from 2009's 3.3 million, also a record.

In June 2010, a grizzly just released after being tranquilized for study killed an Illinois man hiking outside Yellowstone's east gate. Last July, a grizzly killed a Michigan man and injured two others in a nighttime campground rampage near Cooke City, Mont., northeast of the park.

Full-grown Yellowstone bears can stand 6 feet (2 metres) tall and top 600 pounds (270 kilograms). They have been known to peel off a man's face with a single swipe of their massive, clawed paws.