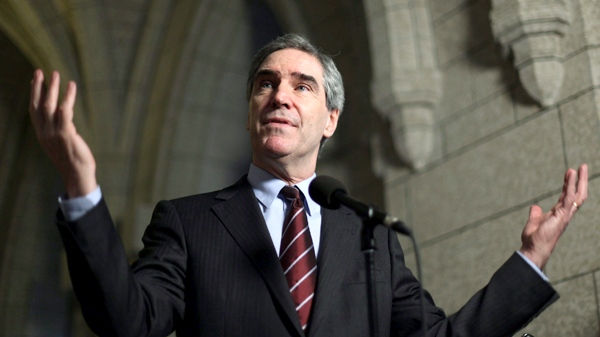 Liberal Leader Michael Ignatieff talks to reporters after meeting with his caucus on Parliament Hill, in Ottawa, on Tuesday, March 2, 2010. (Fred Chartrand / THE CANADIAN PRESS)

OTTAWA - Those one-page MP mailouts that have been stuffing Canadian mail boxes -- and blue boxes -- while ruffling feathers in the House of Commons for the last two years are "essential to our democracy," a Conservative cabinet minister said Monday.

Steven Fletcher, minister of state for democratic reform, was responding to a Liberal motion that would see MP mailing privileges restricted to their own ridings and could save taxpayers up to $10 million each year.

The measure was part of a non-binding Opposition day motion in the Commons designed to roll back government advertising, travel, use of consultants and the size of the federal cabinet -- all adding up to savings the Liberals claim would total more than $1 billion annually.

But the most pointed debate centred on the most easily achievable of the proposed measures and the one that, arguably, would be most appreciated by Canadian taxpayers.

Ten per centers -- so named because MPs can send the taxpayer-funded flyers to distant voters in numbers equal to 10 per cent of their riding -- have been arriving on Canadian doorsteps in dramatically increasing numbers since the Conservatives came to office in 2006.

Figures released by the Commons show that MP printing costs doubled from 2005 to 2009, hitting $10 million last year when 38 of the top 40 spenders were Conservatives.

The Canadian Taxpayers Federation gave one of its annual government waste awards to the "junk mailer program" last week, noting that "as our deficit skyrocketed, MPs hiked up their usage of these flyers to tell us about everything but the deficit."

The cheaply printed pages have provided grist for a number of partisan flashpoints in the Commons.

Liberals complained when a Conservative flyer made thinly veiled accusations of anti-semitism against MP Irwin Cotler, a Jewish human-rights defender.

Conservatives complained when a Liberal flyer claimed the government was providing body bags rather than flu vaccine to native communities.

The Bloc Quebecois complained when a Conservative tract equated the party with supporting soft sentences for pedophiles.

"They've evolved into being little more than propaganda pieces for partisan purposes by all parties -- but worst of all the government party," Liberal MP Wayne Easter said in the Commons as he introduced the motion.

"Is that good use of taxpayers' money?"

The Conservatives and New Democrats seem to think so.

MPs from both parties spoke against the Liberal motion, even as all decried the deeply partisan and negative nature of the messaging that is now dominant in the flyers.

"One of the problems that we have with this motion ... is that it will completely eliminate the ability of members to communicate with people across the country," said Libby Davies, the NDP House leader.

But Liberals complain that even blatant and proven abuses of the current rules for the flyers -- they are not supposed to advocate anyone's election or defeat, for instance -- do not result in any sanctions or change in party behaviour.

The real value of the mass-mailed flyers, say party insiders, is collecting the names and addresses of readers who respond to the blatant "push poll" included in most such tracts. Those names are then added to a party's fundraising and get-out-the-vote database.

The more incendiary the flyer, the more likely it is to elicit a response.

"This contributes to the race to the basement," said Liberal MP Roger Cuzner.

The House will vote on the Liberal motion on Tuesday afternoon.