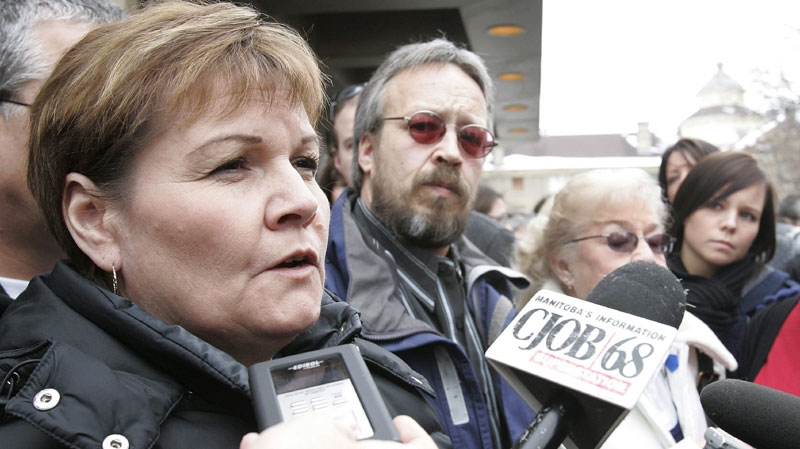 Carol de Delley (left), mother of Tim McLean, and family members including his father Tim (centre) talk to media outside the Law Courts in Winnipeg on Thursday, March 5, 2009 after the verdict from the trial of Vince Li, the man who stabbed and beheaded McLean on a Greyhound Bus this past summer in Manitoba. Li was found to be not criminally responsible for killing Mclean. (THE CANADIAN PRESS/John Woods)

If not this time around, it could happen next time.

That's the fear Carol de Delley holds about the potential release of Vince Li, the man who beheaded her son, Tim McLean, on a Greyhound bus nearly three years ago.

May 30 will mark the third time de Delley has attended a review board hearing for Li, who was found not criminally responsible for her son's death.

But de Delley is determined to make her voice heard and to bring attention to the fact that Li is slowly gaining more freedom while in custody.

Last year, a review board ruled that Li could take escorted walks around the mental health facility where he is being held. To de Delley, granting such a privilege to Li is the first step towards his future release, a scenario she said she believes would inevitably put public safety in jeopardy.

"I don't believe that he will ever be cured. Managed, controlled, but never cured," de Delley told CTV.ca in a recent telephone interview from her Elie, Man., home.

While she doesn't expect that Li's therapists will push to have him released at this point, de Delley predicts they will ask the board to loosen restrictions on him.

"Now that they've upgraded the facilities to allow him these strolls and they've hired two more highly paid professionals to accompany him on these strolls, I think they'll be asking for a little bit more freedom for him," said de Delley.

The yearly rite of attending a review board hearing and entering a victim impact statement isn't helping her heal, de Delley said, but it is necessary if she wants to play a role in preventing Li from returning to society one day.

"I don't believe that the victim's family should be the one sentenced to having to relive this on an annual basis," de Delley said.

This year's hearing comes at a particularly stressful time for de Delley, as she has recently been preparing for possible flooding at her Manitoba home. Her residence is one of the dozens that were on alert in Manitoba for intentional flooding of farmland in the Portage la Prairie area.

"In comparison to what we've already experienced, this is nothing," de Delley said, referring to the flood.

In the long run, de Delley hopes to push for legal changes that will require people found not criminally responsible of violent crimes to stay locked up.

"These are very, very dangerous, violent killers and they need to be treated as such," she said.

"I think that the humane thing to do is to treat them, to medicate them. But behind locked doors for the rest of their natural lives. Otherwise everybody out there is in jeopardy once they're released."