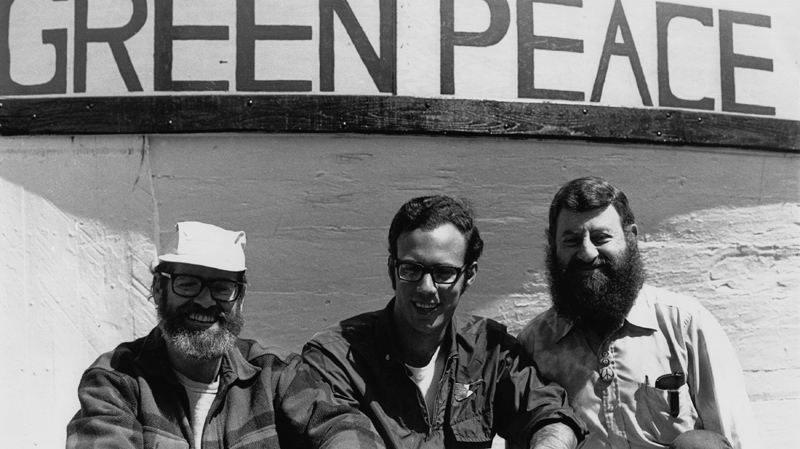 The core of the 1970-71 'Don't Make A Wave Committee', which later formed Greenpeace, from right, Irving Stowe, a lawyer, Paul Cote, a law student, and Jim Bohlen, a forestry scientist. Stowe and Bohlen were long-standing peace activists. Bohlen, a world war veteran, had once worked for the US arms programme; Stowe, a Quaker, brought the idea of bearing witness into the organization. Stowe died in 1974. Bohlen was among the founders of the Green Party of Canada and was Director of Greenpeace Canada for a while, Cote left after a few months. (THE CANADIAN PRESS)

Forty years have passed since a small group of activists sailed from Vancouver with hopes of disrupting a nuclear weapons test in the Aleutian Islands.

They didn't stop the test, as they were intercepted by the U.S. Navy before the ship got very close to their target. But they made their point and drew wide attention to their cause.

Their ship was called the Greenpeace, a name now synonymous with the global environmental group that was spawned by the voyage that launched on Sept. 15, 1971.

Greenpeace celebrates the 40th anniversary of that event on Thursday.

Kumi Naidoo, the group's international executive director, paid tribute to the Greenpeace founders as pioneers who showed that the world was willing to pay attention to environmental issues.

"The Greenpeace founders proved how a small group of committed people can change the world, through peaceful protest and by bearing witness," Naidoo wrote in a message posted to the Greenpeace website on Thursday.

Naidoo will plant a tree in Vancouver on Thursday, which will be dedicated to the Greenpeace founders.

According to Naidoo, Greenpeace now has offices in 40 countries and its work is supported by some 2.8 million donors.

Looking ahead to the future, Naidoo said that it would be a real achievement if Greenpeace outlived its purpose in the next 40 years.

"Greenpeace's ultimate success will be measured when we are no longer necessary," Naidoo wrote in his posted message.

"Hopefully, in forty more years we will have averted climate chaos, ecology and economy will be balanced with considerations of equity and our job will have been done."

But not everyone is a fan of Greenpeace and the grand stunts it has staged throughout the years.

Former Greenpeace member Patrick Moore was involved with the group for 15 years, but cut ties because of their extreme "dogmatic" positions.

Greenpeace writes off Moore as a paid spokesperson for the nuclear energy industry.

But Moore says the group appeals to the public's fears, rather than to scientific arguments or reason.