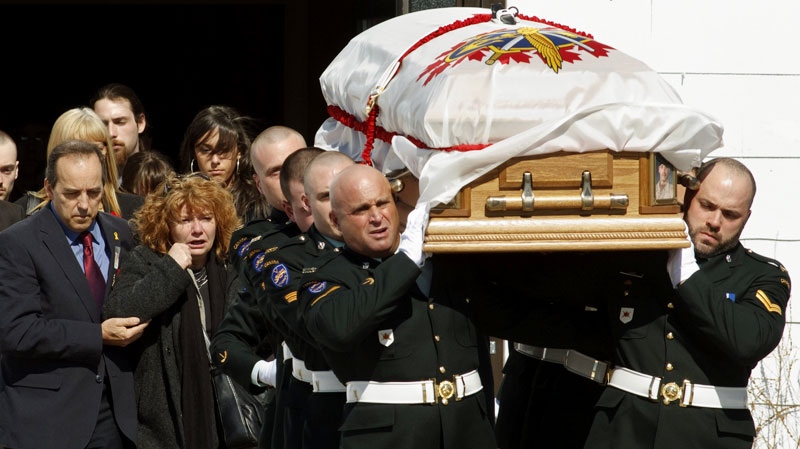 The casket bearing Cpl. Yannick Scherrer is carried out of the church following funeral services, as his father Guy Scherrer, left, and his mother Josee Belisle, second left, look on in CFB Valcartier on Friday April 8 2011. (Clement Allard / THE CANADIAN PRESS)

CFB VALCARTIER, Que. - Family and friends packed a chapel at CFB Valcartier on Friday to bid farewell to Cpl. Yannick Scherrer, remembering Canada's most recent combat casualty as a natural leader who embraced life to the fullest.

Scherrer died on March 27 when he was killed by an improvised explosive device near the village of Nakhonay, southwest of Kandahar city.

Capt. Monique Roumy, the chaplain who conducted the service, said Scherrer had taken on a career that is not always easy.

"Our people in uniform are sometimes misunderstood, stereotyped and judged for what they are and what they represent," she said.

"Despite the looks and the unflattering remarks they get, a soldier marches straight and does what he or she must do because it is not just a job -- it's a vocation."

She noted that any mission has its share of risks.

The 24-year-old Montreal native is the only Canadian soldier to die in Afghanistan this year.

Scherrer was a member of the 1st Battalion of the Royal 22nd Regiment and was on his first tour in the country.

His death brought to 155 the total number of Canadian military members who have died as part of the Afghan mission since it began in 2002.

During the service, Scherrer's sister Stephanie described him as a man who loved life and who resisted attempts by his entourage to dissuade him from pursuing a military career.

She called him a "bon vivant" and a natural leader.

About 60 soldiers formed an honour guard at the ceremony. After it ended, the Canadian flag on top of his coffin was solemnly folded and given to his mother, Josee Belisle.

About 1,900 soldiers from CFB Valcartier have been stationed in Khandahar in Afghanistan since November 2010.

Sherrer had been there since December and he was scheduled to come home in July.