Fukushima fallout cancer cases may be hard to detect 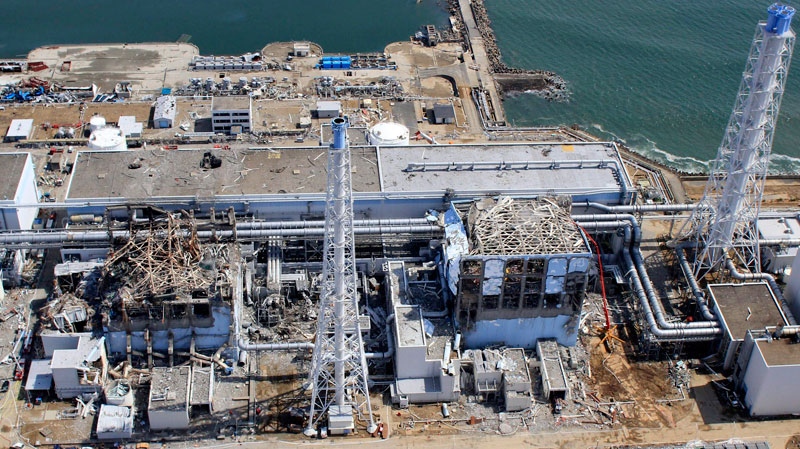 FUKUSHIMA, Japan - Even if the worst nuclear accident in 25 years leads to many people developing cancer, we may never find out.

Looking back on those early days of radiation horror, that may sound implausible.

But the ordinary rate of cancer is so high, and our understanding of the effects of radiation exposure so limited, that any increase in cases from the Fukushima nuclear plant disaster may be undetectable.

Several experts inside and outside Japan told The Associated Press that cancers caused by the radiation may be too few to show up in large population studies, like the long-term survey just getting under way in Fukushima.

That could mean thousands of cancers under the radar in a study of millions of people, or it could be virtually none. Some of the dozen experts the AP interviewed said they believe radiation doses most Japanese people have gotten fall in a "low-dose" range, where the effect on cancer remains unclear.

The cancer risk may be absent, or just too small to detect, said Dr. Fred Mettler, a radiologist who led an international study of health effects from the 1986 Chornobyl disaster.

That's partly because cancer is one of the top killers of people in industrialized nations. Odds are high that if you live long enough, you will die of cancer. The average lifetime cancer risk is about 40 per cent.

In any case, the 2 million residents of Fukushima Prefecture, targeted in the new, 30-year survey, probably got too little radiation to have a noticeable effect on cancer rates, said Seiji Yasumura of the state-run Fukushima Medical University. Yasumura is helping run the project.

"I think he's right," as long as authorities limit children's future exposure to the radiation, said Richard Wakeford, a visiting epidemiology professor at the Dalton Nuclear Institute at the University of Manchester in England. Wakeford, who's also editor of the Journal of Radiological Protection, said he's assuming that the encouraging data he's seen on the risk for thyroid cancer is correct.

The idea that Fukushima-related cancers may go undetected gives no comfort to Edwin Lyman, a physicist and senior scientist with the Union of Concerned Scientists, a group that advocates for nuclear safety. He said that even if cancers don't turn up in population studies, that "doesn't mean the cancers aren't there, and it doesn't mean it doesn't matter."

"I think that a prediction of thousands of cancer deaths as a result of the radiation from Fukushima is not out of line," Lyman said. But he stressed that authorities can do a lot to limit the toll by reducing future exposure to the radiation. That could mean expensive decontamination projects, large areas of condemned land and people never returning home, he said. "There's some difficult choices ahead."

Japan's Cabinet this month endorsed a plan to cut contamination levels in half within the next two years. The government recently announced it plans to study the risk from long-term exposure to the low-dose radiation level used as a trigger for evacuations.

The plant was damaged March 11 by a tsunami triggered by a magnitude-9 earthquake. Japanese authorities estimate it leaked about one-sixth as much radiation as the Chornobyl accident. It spewed radioactive materials like iodine-131, cesium-137 and 29 others contaminating the water, soil, forests and crops for miles around. A recent study suggested that emissions of cesium-137, were in fact twice what the government has estimated.

So far, no radiation-linked death or sickness has been reported in either citizens or workers who are shutting down the plant.

And a preliminary survey of 3,373 evacuees from the 10 towns closest to the plant this summer showed their estimated internal exposure doses over the next several decades would be far below levels officials deem harmful.

But while the Fukushima disaster has faded from world headlines, many Japanese remain concerned about their long-term health. And many don't trust reassurances from government scientists like Yasumura, of the Fukushima survey.

Many consumers worry about the safety of food from Fukushima and surrounding prefectures, although produce and fish found to be above government-set limits for contamination have been barred from the market. For example, mushrooms harvested in and around Fukushima are frequently found to be contaminated and barred from market. Controversy has also erupted around the government's choice of a maximum allowed level for internal radiation exposure from food.

Fukushima has distributed radiation monitors to 280,000 children at its elementary and junior high schools. Many children are allowed to play outside only two or three hours a day. Schools have removed topsoil on the playgrounds to reduce the dose, and the Education Ministry provided radiation handbooks for teachers. Thousands of children have been moved out of Fukushima since the March disasters, mainly due to radiation fears.

Many parents and concerned citizens in and around Fukushima, some even as far as Tokyo, carry Geiger counters for daily measurement of radiation levels in their neighbourhoods, especially near schools and kindergartens. The devices are probably one of the most popular electronics gadgets across Japan these days. People can rent them at DVD shops or drug stores in Fukushima, while many Internet rental businesses specializing in Geiger counters also have emerged.

Citizens groups are also setting up radiation measuring centres where people can submit vegetables, milk or other foods for tests. Some people are turning to traditional Japanese diet -- pickled plum, miso soup and brown rice -- based on a belief that it boosts the immune system.

"I try what I believe is the best, because I don't trust the government any more," says Chieko Shiina, who has turned to that diet. The 65-year-old Fukushima farmer had to close a small Japanese-style inn due to the nuclear crisis.

She thinks leaving Fukushima would be safer but says there is nowhere else to go.

"I know we continue to be irradiated, even right at this moment. I know it would be best just to leave Fukushima," she said.

Yuka Saito, a mother of four who lives in a Fukushima neighbourhood where the evacuation order was recently lifted, said she and her three youngest children spent the summer in Hokkaido to get away from the radiation. She tells her children, ages 6 to 15, to wear medical masks, long-sleeved shirts and a hat whenever they go out, and not to play outside.

She still avoids drinking tap water and keeps a daily log of her own radiation monitoring around the house, kindergarten and schools her children attend.

"We Fukushima people are exposed to radiation more than anyone else outside the prefecture, but we just have to do our best to cope," she said. "We cannot stay inside the house forever."

But what kind of cancer risks do the Japanese really face?

Information on actual radiation exposures for individuals is scarce, and some experts say they can't draw any conclusions yet about risk to the population.

But Michiaki Kai, professor of environmental health at Oita University of Nursing and Health Sciences, said that based on tests he's seen on people and their exposure levels, nobody in Fukushima except for some plant workers has been exposed to harmful levels of radiation.

Radiation generally raises cancer risk in proportion to its amount. At low-dose exposures, many experts and 'regulators embrace the idea that this still holds true. But other experts say direct evidence for that is lacking, and that it's not clear whether such small doses raise cancer risk at all.

"Nobody knows the answer to that question," says Mettler, an emeritus professor of radiology at the University of New Mexico and the U.S. representative to the United Nations Scientific Committee on the Effects of Atomic Radiation, or UNSCEAR. If such low doses do produce cancers, they'd be too few to be detected against the backdrop of normal cancer rates, he said.

To an individual the question may have little meaning, since it deals with the difference between no risk and small risk. For example, the general population was told to evacuate areas that would expose them to more than 20 millisieverts a year. A millisievert measures radiation dose and 20 mSv is about seven times the average dose of background radiation Americans get in a year. A child exposed to 20 mSv for a year would face a calculated risk of about 1 in 400 of getting cancer someday as a result, says David Brenner of Columbia University. So that would add 0.25 per cent onto the typical lifetime cancer risk of about 40 per cent, he said.

And the average dose among the 14,385 workers who worked on the plant through July was 8 mSv, according to the Japanese government. The average lifetime risk of cancer to an individual from that dose alone would be calculated at about 0.05 per cent, or 1 in 2,000, Brenner said.

Brenner stresses that such calculations are uncertain because scientists know so little about the effects of such small doses of radiation.

But in assessing the Fukushima disaster's effect on populations, the low-dose question leads to another: If a lot of people are each exposed to a low dose, can you basically multiply their individual calculated risks to forecast a number of cancers in the population?

Brenner thinks so, which is why he believes some cancers might even appear in Tokyo although each resident's risk is "pretty minuscule."

But Wolfgang Weiss, who chairs the UNSCEAR radiation committee, said the committee considers it inappropriate to predict a certain number of cancer cases from a low-dose exposure, because low-dose risk isn't proven.

Nuclear accidents can cause cancer of the thyroid gland, which can absorb radioactive iodine and become cancerous. That disease is highly treatable and rarely fatal.

Still, the new Fukushima survey will check the thyroids of some 360,000 young people under age 18, with follow-ups planned every five years throughout their lifetimes. It will also track women who were pregnant early in the crisis, do checkups focused on mental health and lifestyle-related illnesses for evacuees and others from around the evacuation zone, and ask residents to fill out a 12-page questionnaire to assess their radiation exposure during the first weeks of the crisis.

But the survey organizers are having trouble getting responses, partly because of address changes. As of mid-October, less than half the residents had responded to the health questionnaire.

Some residents are skeptical about the survey's objectivity because of mistrust toward the government, which repeatedly delayed disclosing key data and which revised evacuation zones and safety standards after the accident. Also, the government's nuclear safety commission recommended use of iodine tablets but none of the residents received them just before or during evacuation, when the preventive medicine would have been most effective.

Some wonder if the study is using them as human guinea pigs to examine the impact of radiation on humans.

Eisuke Matsui, a lung cancer specialist and a former associate professor at Gifu University School of Medicine, criticized the project. He said it appears to largely ignore potential radiation-induced health risks like diabetes, cataracts and heart problems that have been hinted at by some studies of Chornobyl.

"If thyroid cancer is virtually the only abnormality on which they are focusing, I must say there is a big question mark over the reliability of this survey," he said.

He also suggested sampling hair, clipped nails and fallen baby teeth to test for radioactive isotopes such as strontium that are undetectable by the survey's current approach.

"We should check as many potential problems as possible," Matsui said.

Yasumura acknowledges the main purpose of his study is "to relieve radiation fears." But Matsui says he has a problem with that.

"A health survey should be a start," Matsui says, "not a goal."

Tatsuhiko Kodama, head of the Radioisotope Centre at the University of Tokyo, urged quick action to determine the cancer risks.

He said big population surveys and analysis will take so long that it would make more sense to run a careful simulation of radiation exposures and do anything possible to reduce the risks.

"Our responsibility is to tell the people now what possible risks may be to their health," he said.