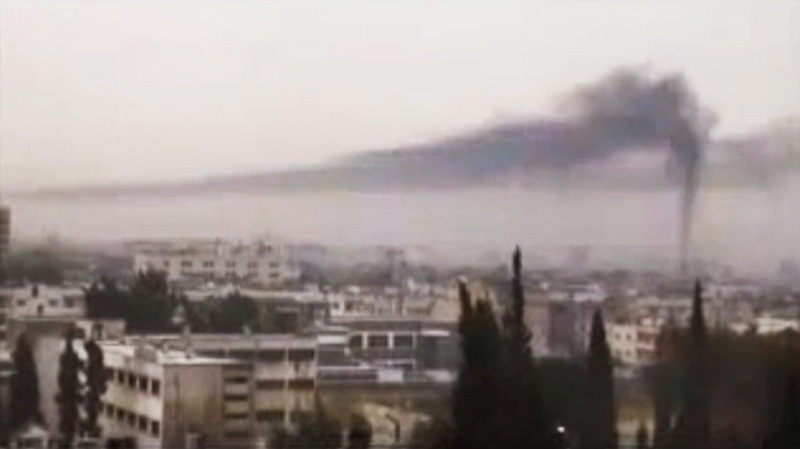 British Prime Minister David Cameron, at Sarkozy's side after meetings Friday, said Britain and France are working "to see what more we can do" to help the Syrian opposition.

On Thursday, U.N. Secretary General Ban Ki-moon accused the Syrian regime of committing "almost certain" crimes against humanity. The U.N. General Assembly also overwhelmingly voted for a resolution that strongly condemns human rights violations by Syrian President Bashar Assad's government. According to the U.N., more than 5,400 people have been killed since March in the regime's bloody crackdown.

The Britain-based Syrian Observatory for Human Rights said shells were slamming into the Homs neighbourhoods of Baba Amr, Bayadah, Khaldiyeh and Inshaat on Friday.

Syrian troops have been attacking the neighbourhoods on Feb. 4. Amateur videos showed at least one tank shelling Baba Amr from a close distance.

Homs, a province in central Syria that stretches from the border with Lebanon in the west to the frontiers with Iraq and Jordan in the east, has been one of the key centres of the 11-month-old uprising against Assad's authoritarian rule. As the uprising has become more militarized in recent months with army defectors battling regime forces almost daily, the rebels have taken control of small parts of the province including neighbourhoods in the city of Homs and the nearby town of Rastan.

Britain and France have pushed for international condemnation of Assad's rule.

"What is happening in Syria is appalling," Cameron told a news conference. "I'm not satisfied that we are taking all the action we can."

In a joint statement, Cameron and Sarkozy pledged that their countries "will continue to increase their engagement with the Syrian opposition, including encouraging the opposition to work together and to support the vision of an inclusive, prosperous and free Syria. "

They urged the European Union to adopt new sanctions against Syria's regime by Feb. 27 and offer "substantial" aid to Syria if and when Assad leaves.

Cameron also said Britain is sending food rations for 20,000 people and medical supplies for those affected by fighting in Homs and elsewhere in Syria.

The aid will include emergency drinking water and essential household items for refugees forced to leave their homes because of fighting in areas where humanitarian agencies are struggling to work freely amid government restrictions on movement.