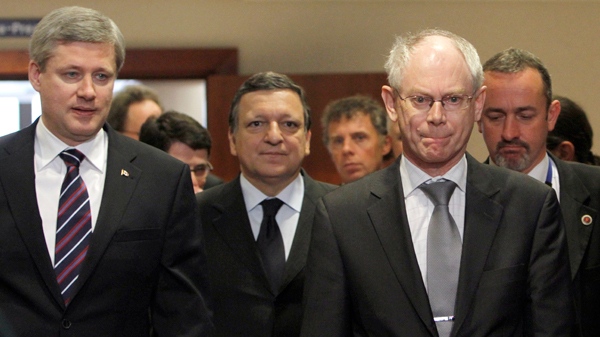 Canada would lose up to 150,000 jobs and see its trade deficit swell dramatically under a free-trade pact with the European Union, warns a new study by the left-leaning Canadian Centre for Policy Alternatives.

Canada is currently in talks with the EU to hash out the terms of a potential trade agreement.

Canada already has an annual trade deficit -- meaning it imports more from Europe than it exports to Europe -- of about $15 billion in goods and almost $4 billion in services, with the EU.

That translates to losses of about 70,000 jobs, the group said.

Canada would see greater losses under a free-trade agreement, the study says, with Canada's gross domestic product taking a hit of between .55 per cent and 3 per cent over the first few years of an agreement.

Those losses would be further exacerbated by spin-off effects in the production sector, employment and investment.

A joint study between the European Commission and Canada showed benefits worth $12 billion for Canada under such an agreement. But the report pointed out that even that study predicted that Canada's imports from the EU would increase by twice as much as its exports, "resulting in a substantial widening of the existing bilateral trade deficit."

Stanford also points out that free-trade agreements with the U.S., Mexico, Israel and Chile have all resulted in much higher increases in imports than in exports.

Stanford said there is some merit to the idea of a free-trade pact, but the disadvantages for Canada far outweigh the benefits.

"Enhancing Canadian exports and diversifying export markets away from the U.S. are important economic policy goals for Canada," Stanford said. "But merely signing another free-trade agreement -- even with a partner as important as the EU --has no chance of achieving either goal."