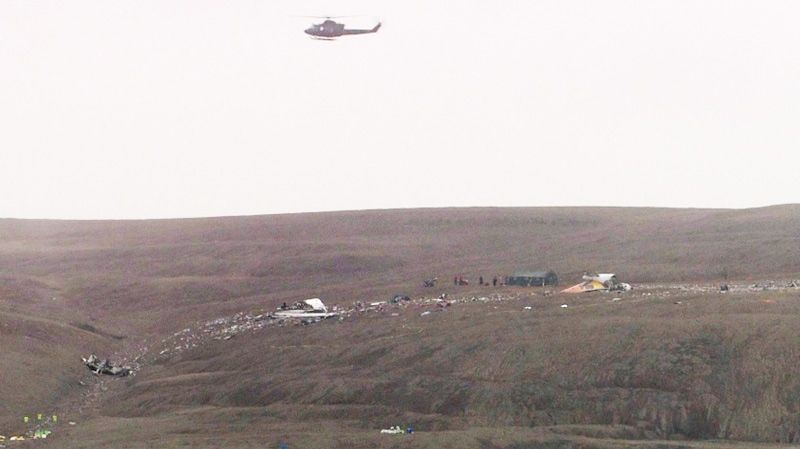 RESOLUTE, Nunavut - New Brunswick construction worker Raymond Pitre had never been on a plane and had to muster up the courage to get on First Air Flight 6560.

"He was nervous and afraid ... but he said, 'I'm going,"' his mother-in-law Donna Temple recalled Tuesday from Bathurst, N.B.

She said the 39-year-old was tired of waiting for the wet weather on the East Coast to improve so he could get back to laying concrete. Friends in the Arctic had found him a job in Resolute, Nunavut, doing drywall work.

His wife, Kirsten, and five children are devastated he didn't make it there alive, said Temple.

Pitre was one of twelve who died when a chartered First Air 737, carrying supplies and passengers from Yellowknife, crashed into a hillside while attempting to land at the Resolute airport Saturday.

The cause of the crash hasn't been determined, but witnesses have said there was fog and a low cloud ceiling at the time. Soldiers from nearby military exercises rushed to the fiery wreckage. They found three survivors.

Nicole Williamson, a 23-year-old university student, had walked away from the crash and found a crying Gabrielle Pelky, 7, perched on a rock with a broken leg. Police say she carried the child to safety.

The girl and her six-year-old sister, Cheyenne Eckalook, and been visiting their father in British Columbia and were going to see their grandfather, a hotel owner in Resolute. Cheyenne died in the crash.

Gabrielle is doing well and will likely be released from the Children's Hospital of Eastern Ontario on Wednesday, said hospital spokeswoman Marie Belanger.

Williamson and 48-year-old Robin Wyllie are recovering at Ottawa Hospital.

Williamson's family released a statement Tuesday thanking rescue workers, medical staff and "all Canadians who share our relief and wonder at this miracle in the midst of tragedy."

A student at Carleton University in Ottawa, Williamson is studying for her masters degree in geosciences.

She was to undergo surgery on an injured foot Tuesday.

"Her treatment involves pain management and her recovery is critically dependent on rest and healing of bruises and cuts to her body caused by the crash," said the statement.

Fellow geologist Nathan Reeves said his warm and witty friend had been working on her thesis project on Victoria Island, south of Resolute.

"It's difficult to believe anyone survived the crash," Reeves wrote in an email from a remote field camp in the Yukon. "There are incredible dangers working remotely in the North, but typically you feel safer stepping out of the bush craft into the large commercial jet."

Brian MacDonald, the lead investigator with the Transportation Safety Board, said analysts have recovered some data from the plane's black boxes.

First Air confirmed Tuesday the names of all four crew members who died in the crash.

Pilot Blair Rutherford of Leduc, Alta., had been with the company for 15 years. The 48-year-old was married to a First Air flight attendant, Tatiana, and they have two young children.

Yellowknife flight attendant Ute Merritt, 55, was also married to a First Air employee. Her husband, Jim, is a pilot on the company's Hercules aircraft. They have five children.

The co-pilot, 35-year-old David Hare, lived in Yellowknife with his wife, Jane, and their three daughters -- the youngest just one month old.

Head attendant Ann Marie Chassie, 42, had worked for First Air in Yellowknife for 22 years. She leaves behind two teenage children.

Also among the dead are passengers Steve Girouard and his fiancee, Lise Lamoureux, also from New Brunswick.

Their families were too distraught to talk on Tuesday.

Lamoureux had excitedly posted a message on Twitter before they left their home in New Brunswick: "Leaving for Nunavut tomorrow morning!! Bye Bathurst, HELLO RESOLUTION BAY!! Population 212 once we arrive."