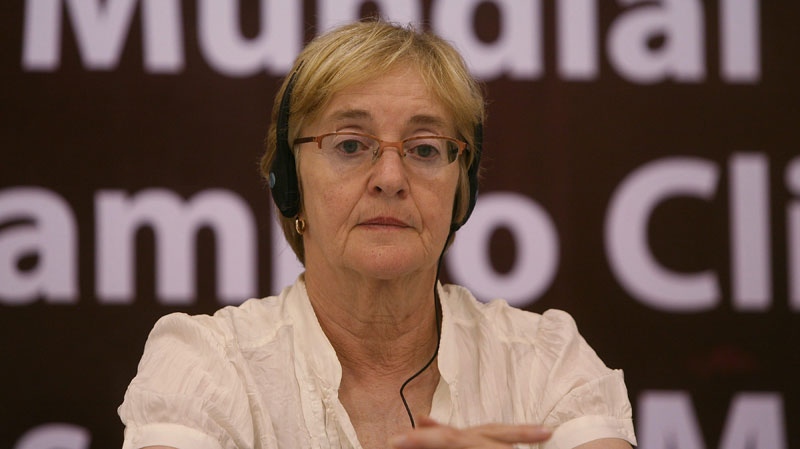 Canadian activist and writer Maude Barlow attends a session of the World People's Conference on Climate Change and the Rights of Mother Earth in Tiquipaya, on the outskirts of Cochabamba, Bolivia, Tuesday, April 20, 2010. (AP / Juan Karita)

MONCTON, N.B. - The Council of Canadians is calling on First Nations not to allow the federal government to shirk its responsibility to provide safe drinking water.

The United Nations has recognized water and sanitation as a human right, said Maude Barlow, the council's national chairwoman, in a presentation Thursday to the Assembly of First Nations.

Barlow said that means Ottawa is obligated under international law to come up with a plan to fulfil that right, and yet dozens of First Nations communities continue to go without clean water.

"The federal government is in violation of this new international recognition," said Barlow, a former senior adviser on water with the UN General Assembly.

"They have obligations to fulfil and we must not let them off the hook."

Barlow was speaking at a session on community development and safety during the Assembly of First Nation's 32nd annual meeting in Moncton. The three-day meeting began Tuesday.

A recent report to Parliament by the auditor general found that clean drinking water on First Nations -- as well as education, adequate housing and child welfare -- are all in an "unacceptable" state.

Barlow said there are more than 100 boil water advisories in effect on reserves and another 49 First Nations communities where boiling water doesn't make it safe enough for consumption.

She raised concern over Bill S-11, proposed safe drinking water legislation that she said would turn a lot of the responsibility for water services over to reserves. First Nations have spoken out against the bill, which was introduced in the Senate last year, over its lack of funding to build the water systems needed to meet any quality standards.

"What (the government is) saying is that it respects First Nations, it's giving you more self-government," said Barlow. "But no, it's not."

Without the necessary funding, Barlow said reserves may have to turn to private water companies that will charge for service. She said that's not a solution, either.

She said the federal government should give First Nations the proper training, funding and infrastructure to manage their own water systems.

Earlier this year, Conservative Senator Patrick Brazeau defended Bill S-11 during a Senate committee hearing, saying it would give First Nations a chance to develop regulations that would help solve their water problems.

But Roger Augustine, regional chief for New Brunswick and Prince Edward Island, told a small group gathered at the conference in Moncton that more action was needed.

"I don't know how we can do this without the government's support, but I do know one thing -- the energy has to be developed here," he continued. "You are the experts in our territories."

Barlow said Canada has the tools to fix the problem.

"One of the wealthiest countries in the world with one of the most abundant water sources should be able to figure this out," she said.

"And shame on us for not having done it sooner."

Barlow's call for action came as a new report was released that shows an increase in the number of high-risk drinking water systems on First Nations.

The review also says that 14 per cent of wastewater systems inspected on First Nations are at a high overall risk and 51 per cent are a medium overall risk.