Raped, beaten and tortured: Former ISIS sex slave on her journey to new life in Canada

Adiba stands in front of a Canadian flag and a picture of a missing family member that hang in her Richmond Hill, Ontario home. July 2017.

WARNING: Some of the details may be distressing to readers.

By the time she was 25 years old, Adiba* had been bought and sold six times by Islamic State militants in Iraq. The first was in August 2014.

A month later, she was bought by another ISIS militant who waited just three months before selling her to another man who tortured and raped her. The five months Adiba spent in his captivity was the longest amount of time the Yazidi woman was with any of her captors.

In the approximately nine months that followed, the buy-and-sell scenario was repeated another three times with different men.

Adiba said she felt dead inside every time she was sold like chattel, forced to live in captivity in various houses and apartments throughout the Iraqi city of Mosul.

She was forced to subsist on scrounged garbage scraps, eating off the same floors where she slept. She drank water from toilets.

“They raped me. They beat me. They tortured me,” she said through a translator. Adiba finds it difficult to talk about her past as an ISIS sex slave. But she’s decided to open up about her harrowing experiences in an exclusive interview with CTV News, in the hopes of compelling the Canadian government to do more to help the thousands of Yazidi women and girls still enslaved by ISIS.

In the winter of 2016, after three months as servant and sex slave to an ISIS fighter named Amin, she caught a break.

It was just after lunchtime and Adiba was cleaning while her captor and his family were in another room. She seized on the chance to escape, despite the risk.

An hour later, she ran into a local man who was standing outside his home, and begged him for help.

Abu Muhammed, a married family man, agreed to help Adiba. Instead, he took her to an empty house, where he raped her over the course of about a month.

Adiba arranged a phone call between her captor and her father, who managed to raise the money with the help of family, friends and neighbours.

In order to travel to the Kirkuk area, where the exchange would take place, Adiba was given a fake ID with a Muslim name, made to wear a burka and told to claim she was Abu Muhammed's wife, so that she wouldn't be questioned along the way.

Click here to see a map of Adiba's journey

After making the approximately 180-kilometre journey from Mosul, they met up with Adiba’s father and the ransom was paid.

And in that moment, Adiba said, she felt reborn.

“When I saw my father, I said 'Thank God. I am free and I won’t see this misery again'.”

‘WE ALL WANTED TO DIE’

Her life hadn't always been marked by misery. Before ISIS began its violent push to establish a caliphate in Iraq and Syria, Adiba and her 11 siblings lived with their mother and father in the small village of Tall Qasab, in northern Iraq. 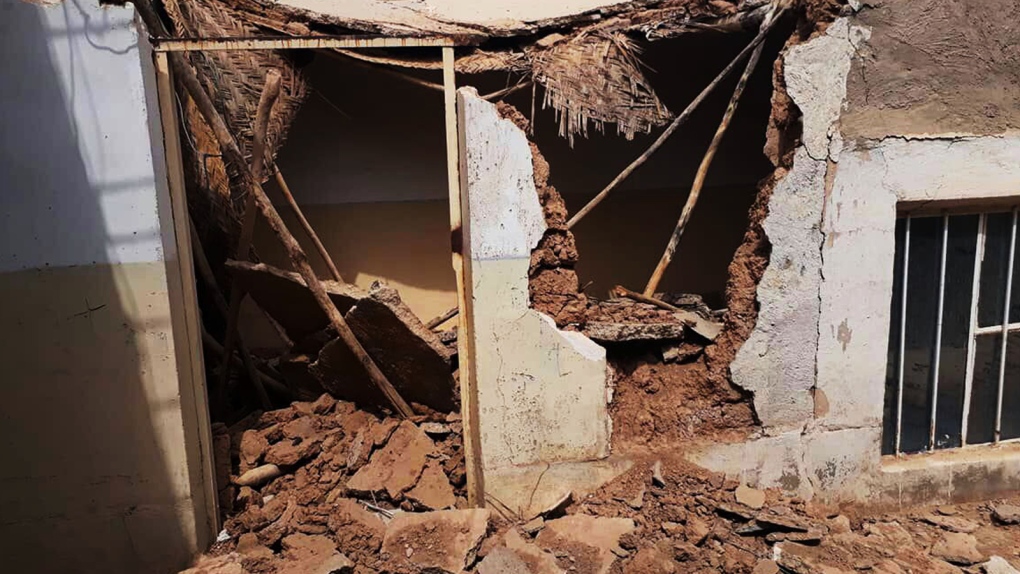 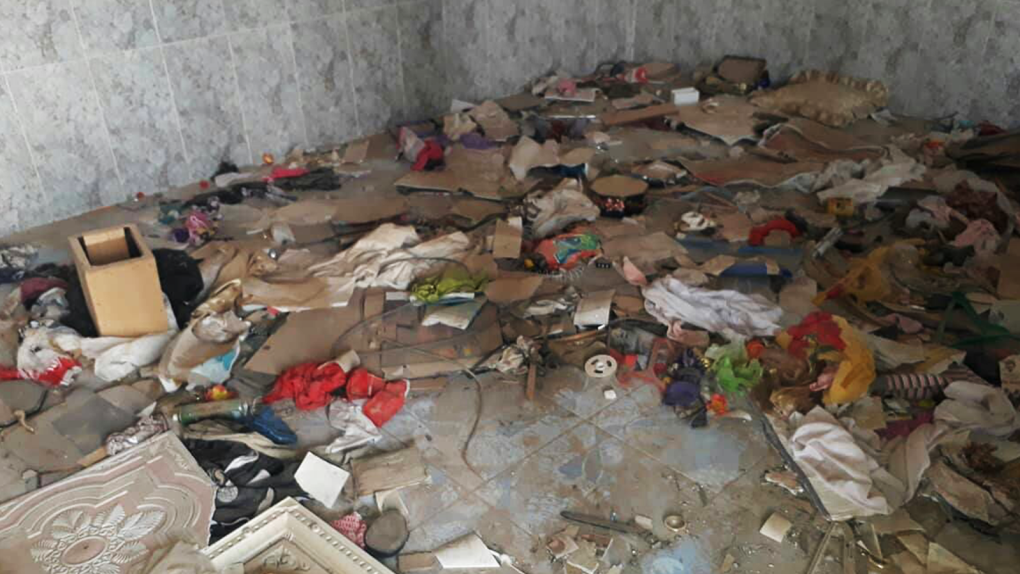 She said the family didn’t have a lot of money, but they were happy. That all changed when ISIS militants began storming towns and villages throughout northern Iraq in 2014, executing tens of thousands of people in their bid to take control.

Adiba becomes emotional when she recalls the night ISIS overran her village. Her family tried to escape in two vehicles, but were intercepted by ISIS fighters at a checkpoint and taken into custody.

“The day that ISIS entered our village, we all wanted to die. But they wouldn’t let us die.”

Women and children were separated from the men, many of whom, including her own brother-in-law, were killed before her eyes.

Women and girls, including her sisters and nieces, were taken to Mosul to be auctioned off. Others were taken to Syria, where the anti-regime uprising that spiralled into civil war had been raging for three years.

“If you didn’t see it with your own eyes or live it, you’d never believe it happened,” Adiba said of that terrible time.

“Life under ISIS, there is no difference between life and death. You’re alive, but it’s like you’re dead.”

She remembers wishing she were dead, rather than live through the horrors of that experience.

“The day that ISIS entered our village, we all wanted to die. But they wouldn’t let us die.”

The Yazidis are a Kurdish minority group of around 700,000 people targeted for their ancient religious beliefs, which combine elements of Hinduism, Judaism, Christianity and Islam. They became known as heretics, and faced years of oppression and threats of ethnic cleansing because of it. The United Nations estimates more than 3,000 Yazidi women and girls are still in ISIS captivity. 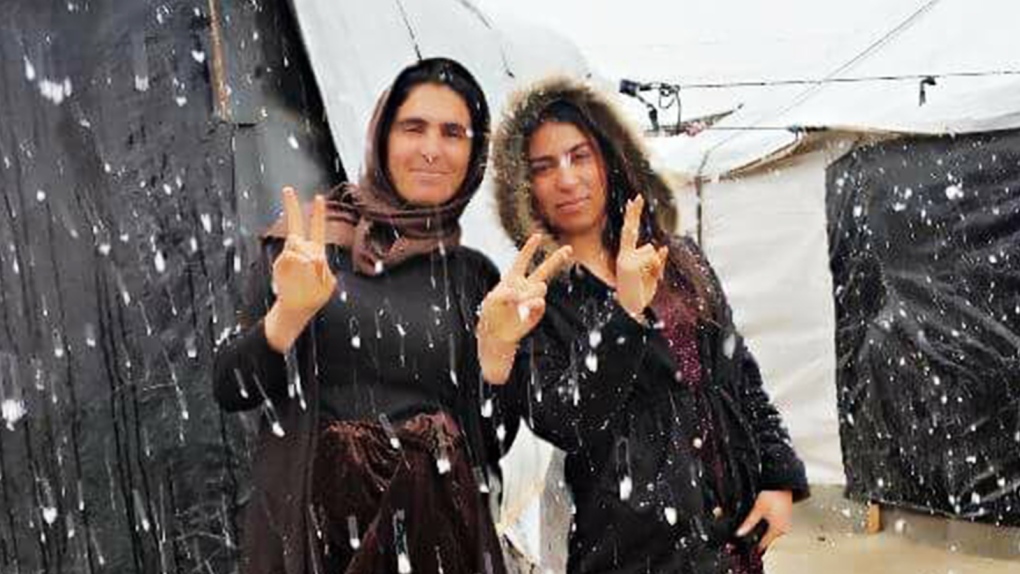 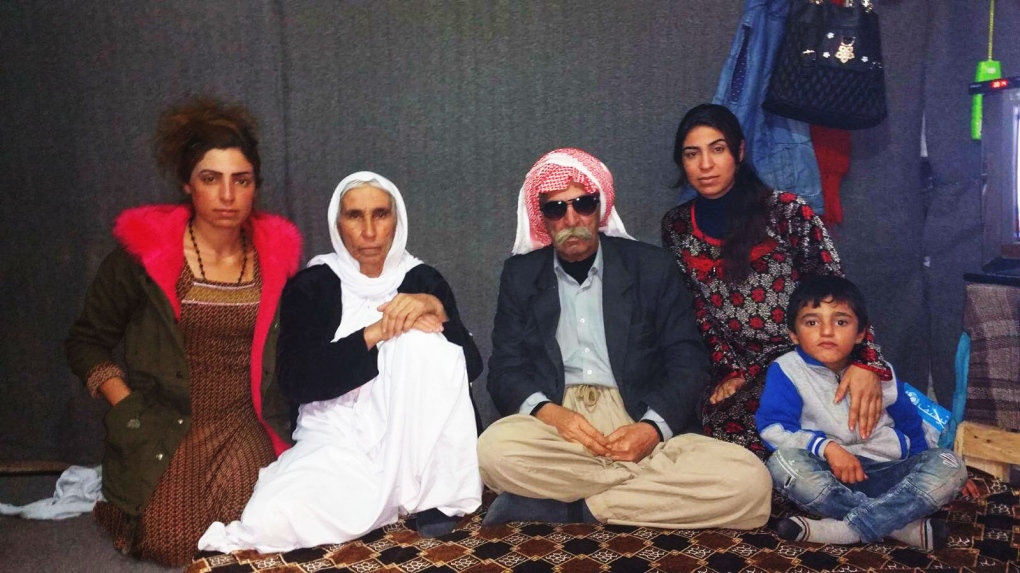 Of Adiba’s 11 siblings, one brother escaped to Germany on a smuggler’s boat. Six others are believed to be living at various refugee camps in Iraq, but Adiba estimates as many as 40 members of her extended family remain unaccounted for. She fears many were captured and killed by ISIS militants.

Shirin and Hadiya, Adiba’s two older sisters, each spent three months in ISIS captivity before escaping. They were also repeatedly raped and abused by their captors. One of Adiba’s nieces, Dilveen, was kidnapped when she was just 11 and sold to a 70-year-old man who tried to rape her and take her to Syria.

One of the darkest memories that haunts Hadiya from her time in ISIS captivity involves another young girl. Hadiya recalls seeing a mother eating. Then, she says ISIS militants asked the mother if she knew what kind of meat she had consumed. When the mother said she didn’t know, the militants told her she had eaten the flesh of her own daughter, whom they had killed and cooked. They brought out the girl’s head and feet as proof.

In early 2016, Adiba was reunited with her two sisters and six nieces and nephews at a refugee camp in Dohuk in northern Iraq, where the UN Refugee Agency identified them for resettlement and referred their case to Canada. Adiba’s parents, Ali and Konaf, were also identified for resettlement, but declined. They chose to stay behind hoping they could find a missing son.

It would be another year before Adiba and some of her family would find their way to Canada.

'A STRANGER IN A NEW PLACE'

Adiba, who is now 26, lives in a bungalow in a quiet Richmond Hill, Ont. neighbourhood, with her two sisters, nieces and nephews. 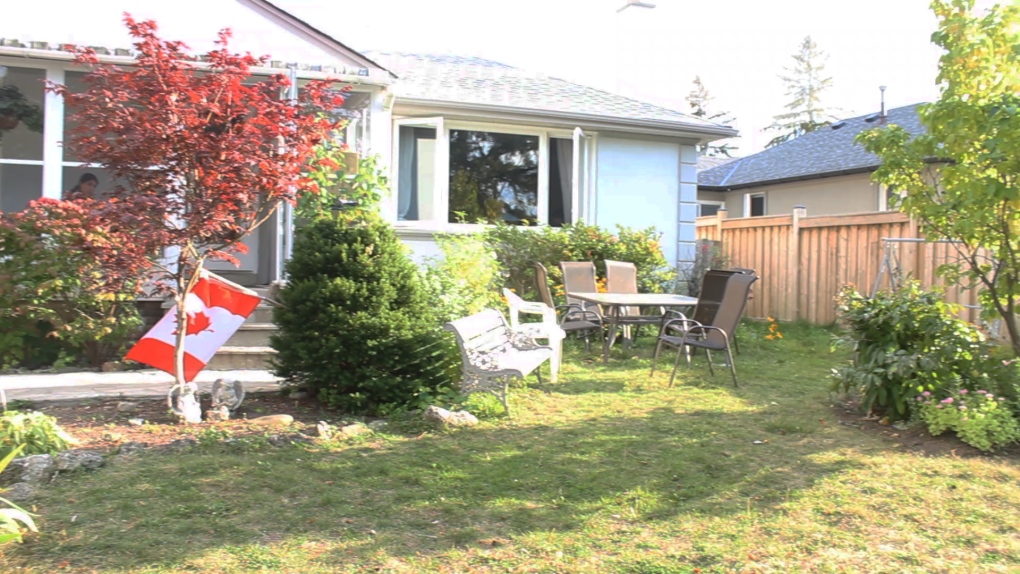 The outside of Adiba’s home in Richmond Hill, Ontario. July 2017 (Marlene Leung/CTV News)

They’ve been in Canada since February, when they arrived from Iraq as government-assisted refugees.

"I remember the day I came here. I didn’t know much about the country. It was tough. Being a stranger in a new place is something that’s hard,” Adiba says.

Three unframed pictures of family members, taken before the ISIS attack on her village, are taped to the wall in her sparsely furnished living room, hanging next to a poster-sized Canadian flag.

That corner of the room has become a sort of makeshift shrine, a reminder of a dark void in Adiba’s life.

“I need my family. That’s the one thing that will help me feel good," she says.

Last June, a United Nations inquiry officially declared the systemic violations and atrocities being committed against Yazidis by ISIS as genocide. On October 25, 2016, following a unanimous vote on a Conservative motion, Ottawa did the same and acknowledged the violence as genocide.

Four months later, the government unveiled a plan to help resettle 1,200 refugees from vulnerable minority groups in Canada by the end of 2017. The $28-million commitment would help facilitate private sponsorships, as well as government-assisted refugees, like Adiba.

“Enemies of Yazidis should see them and understand that Yazidis are not done, are not finished, not going away.”

Immigration, Refugees and Citizenship Canada (IRCC) spokesperson Nancy Caron says nearly 800 survivors of Daesh (Daesh is an Arabic acronym derived from a phrase naming ISIS) had arrived as of October 9, 2017. Roughly 650 of them are Yazidi. The country of origin breakdown for these Yazidis is as follows: 38 per cent have come from Iraq, 36 per cent are from Lebanon, and 26 per cent from Turkey. The government says it’s on track to fulfilling its promise, but won’t speculate on future policy decisions that could extend this program.

Adiba says she’s thankful for the help the government has provided for her family. She’s also thankful for One Free World International (OFWI), the human rights organization advocating for persecuted religious minorities like her, around the world. OFWI’s founder, reverend Majed El Shafie, a refugee himself who came to Canada 15 years ago from his native Egypt, has been working closely with Adiba and her family to get them here, settle in, and recover. 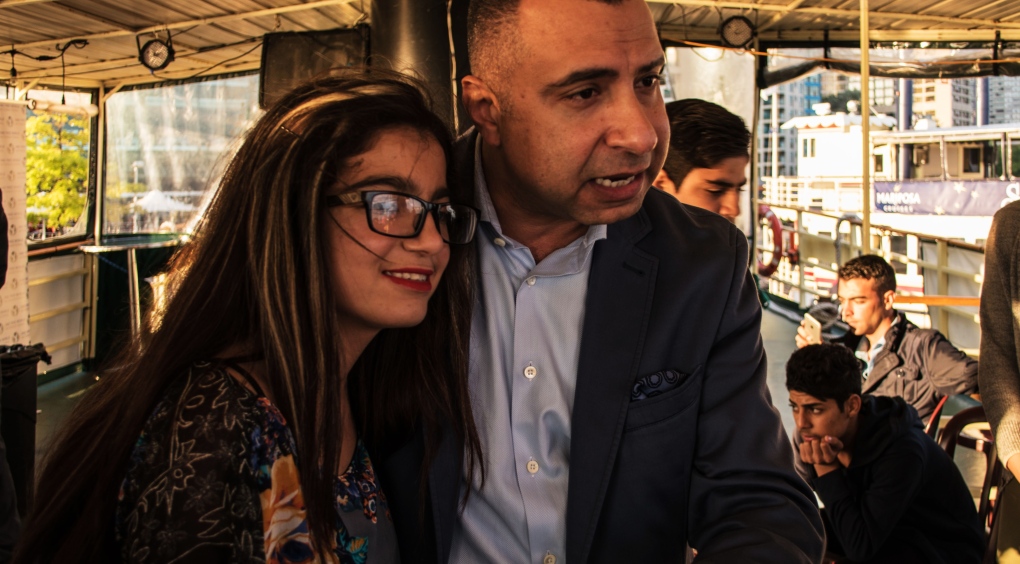 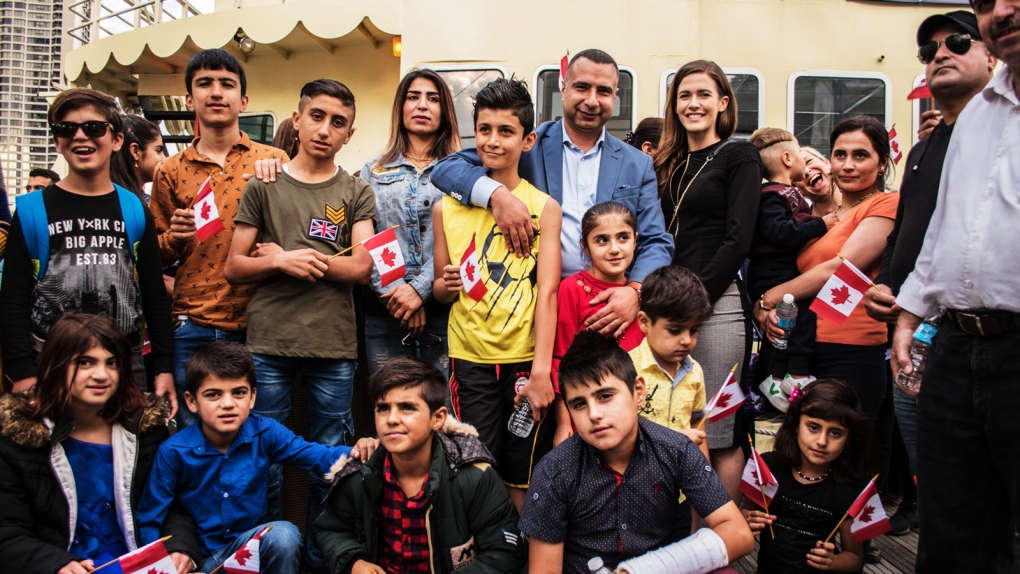 El Shafie says 1,200 is not a large enough number and thinks the government can easily increase its intake to 3,000 or 4,000 Yazidis. “I don’t think it’s enough with the scale of the genocide,” he told CTVNews.ca in an interview at Adiba’s home. El Shafie also wants to see the Canadian government and the international community take steps to protect the Yazidis on their home turf. He’s also concerned that government corruption in Iraq is compromising financial aid destined for Yazidis living in refugee camps.

LOOKING TO THE FUTURE

With assistance from OFWI, the sisters have made requests through local MPs to bring their relatives in Iraq, including Shirin’s husband, to Canada. A formal request has been filed with Immigration, Refugees and Citizenship Canada. COSTI, a Toronto-based immigration services agency, and IRCC officials agreed to extend for another year the monthly benefits Adiba and her family receive. 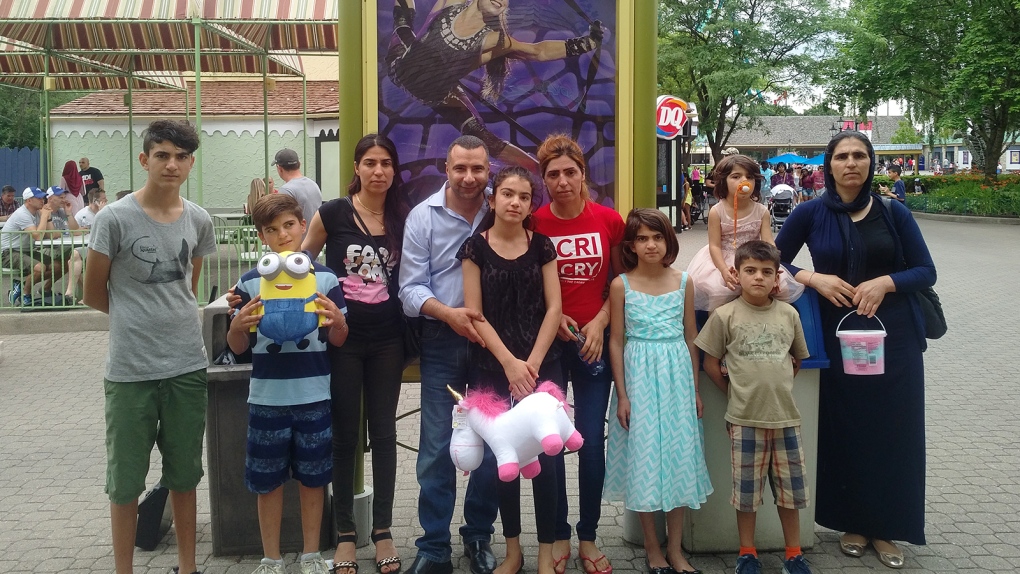 Adiba and her family at their first visit to Wonderland. Summer 2017. (Family photo)

Adiba and her sisters are taking English lessons. A few months ago, Adiba began volunteering with OFWI, serving as a refugee support services coordinator and translator for other recently resettled Yazidis. Hadiya’s kids finished their first year of school, and some are already dreaming about becoming lawyers, police officers and doctors.

Adiba finds inspiration through them.

“I hope the kids will graduate, I see them as the future. Enemies of Yazidis should see them and understand that Yazidis are not done, are not finished, not going away.”

A Standing Committee on Citizenship and Immigration held two meetings last week, to hear testimony from government officials and human rights activists about the resettlement in Canada of Yazidi women and girls.

In light of the federal government’s recent announcement, of an immigration strategy that aims to admit almost one million newcomers to Canada over the next three years, Adiba has renewed hope that she might soon be reunited with her family still in Iraq.

But she’s not losing sight of the bigger picture.

“I want the whole world to help free the Yazidi girls from the hands of ISIS. There are still 3,000 Yazidi girls that are being raped, bought and sold every day. Why is not more being done for the Yazidi community?”

*Adiba’s last name is being withheld to protect extended family.

Adiba's journey from Iraq to Canada: