How Kathleen Wynne could win the Ontario election | CTV News

How Kathleen Wynne could win the Ontario election

Two days after Doug Ford won the leadership of the Ontario Progressive Conservative Party, Liberal Kathleen Wynne invited the media to join her at a Toronto school. 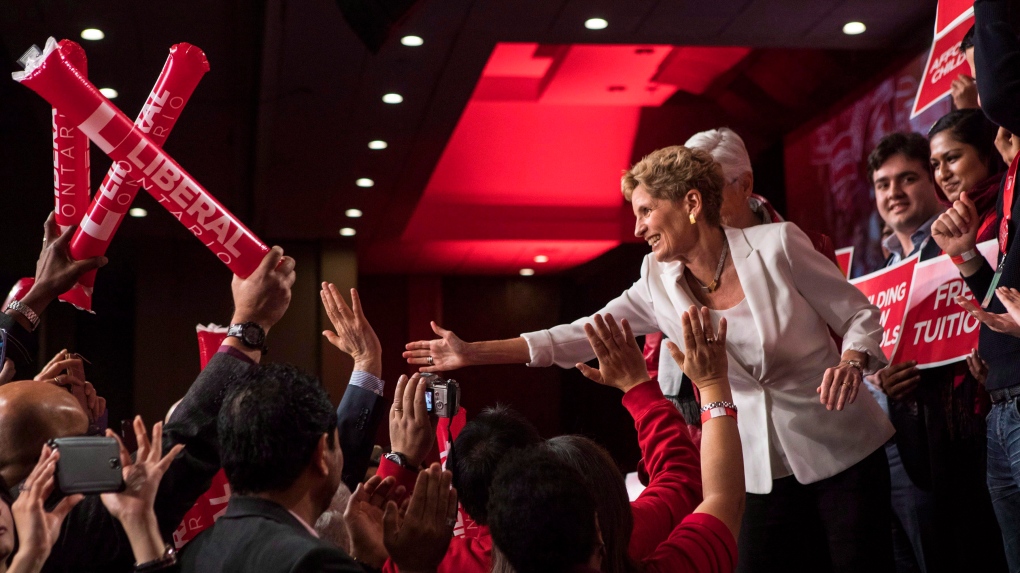 Such photo-ops are usually meant to announce a specific new policy, but this press conference was billed as an event to “talk to families” about “how the package of supports the government has announced is helping.”

It was also chance for reporters to ask Wynne about her reaction to the news that she would be facing off against one of the famous Ford brothers.

“From my perspective, it didn’t matter who the leader of the Conservatives was going to be,” Wynne said. “Our policies are about investing in people, investing in the care of people in this province and allowing people to be able to care for one another.”

Wynne went on to highlight policies that the Liberals have implemented since winning a majority in 2014, including raising the minimum wage to $14 an hour with another $1 hike planned for January 1, introducing publicly-funded pharmacare for those under age 25, and providing free tuition to hundreds of thousands of college and university students.

“What we are putting forward as a platform is very, very different than what any of the Conservatives were putting forward, which is cutting and removing supports from people,” Wynne went on.

Poll after poll has shown Wynne is Canada’s most unpopular premier and a majority of Ontarians agree that, after nearly 15 years in power, it is time for the Liberals to go.

But that doesn’t mean voters dislike the Liberals’ policies.

University of Toronto political scientist Chris Cochrane and Carleton University’s Paul Thomas say that Wynne still has a path to victory in the June election -- and that’s by painting Ford as a risk to the growing public programs that many voters seem to like.

“The pitch to voters will be: ‘We’ll lose the progress we’ve made,’” says Thomas.

“It will be much more playing to the fear of loss as compared to the potential for gain.”

Using the levers of power

Two days after the press conference at the elementary school, Wynne made the surprise announcement that she would prorogue the legislature, dissolving the current session and forcing a televised throne speech outlining the Liberals’ agenda.

Thomas says it was an “incredibly cynical” move, but not the first time the Liberals used the “levers of power” to tout their policies. 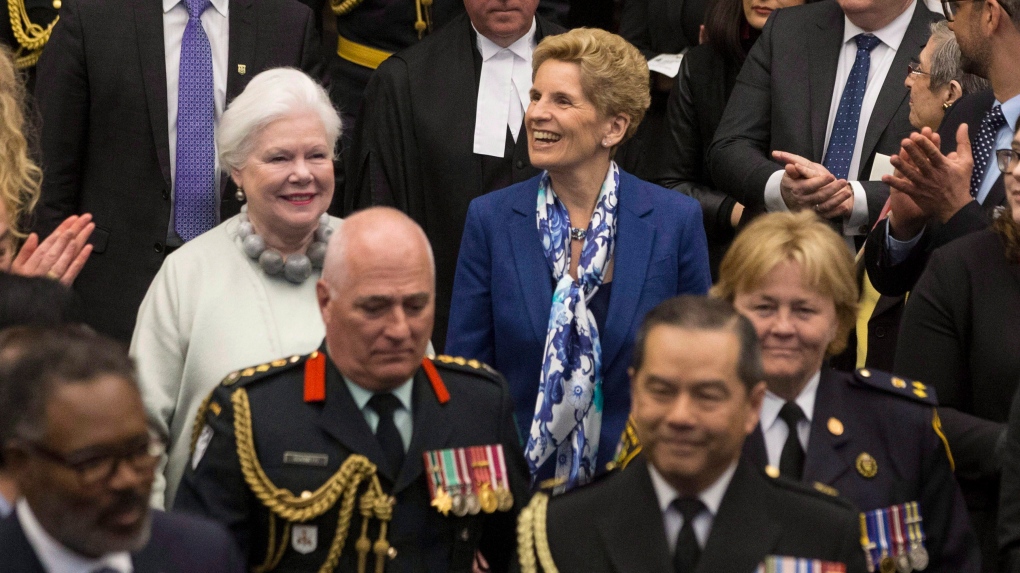 They have done the same thing with government advertising, he says.

Ontario’s Auditor General pointed out in the fall that the Liberal government spent more than $58 million on advertising in 2016-17, and 30 per cent of that spending was for advertisements in which the “primary goal” appeared to be “fostering a positive impression of the government party.”

Those advertisements, the report said, would not have been allowed under the rules before the Liberals changed them in 2015.

For example, the Ministry of Energy spent just over $1 million for radio ads touting the province’s cut to hydro bills. The words “we’ve heard you” and “fair for everyone” led the Auditor General “to conclude that the campaign was self-congratulatory and aimed primarily at ensuring the government gets credit for its action on energy prices.”

It’s easy to see why the Liberals are willing to risk a backlash by spending taxpayer dollars on apparently partisan ads. An Angus Reid poll, taken just before the $14 minimum wage came into effect, found that 60 per cent of Ontarians support the $15 minimum wage.

The more people like things like the minimum wage, the more likely they may be to consider “plugging their nose” and voting Liberal, according to Cochrane.

The March throne speech coincided with near-daily announcements of new spending in the run-up to the budget nine days later.

There was $575 million a year for seniors pharmacare, $2.4 billion over 10 years for Toronto’s SickKids Hospital, $822 million for hospitals in 2018-19, $2.1 billion over four-years for mental health care, and $300 million over three years for children with special needs. 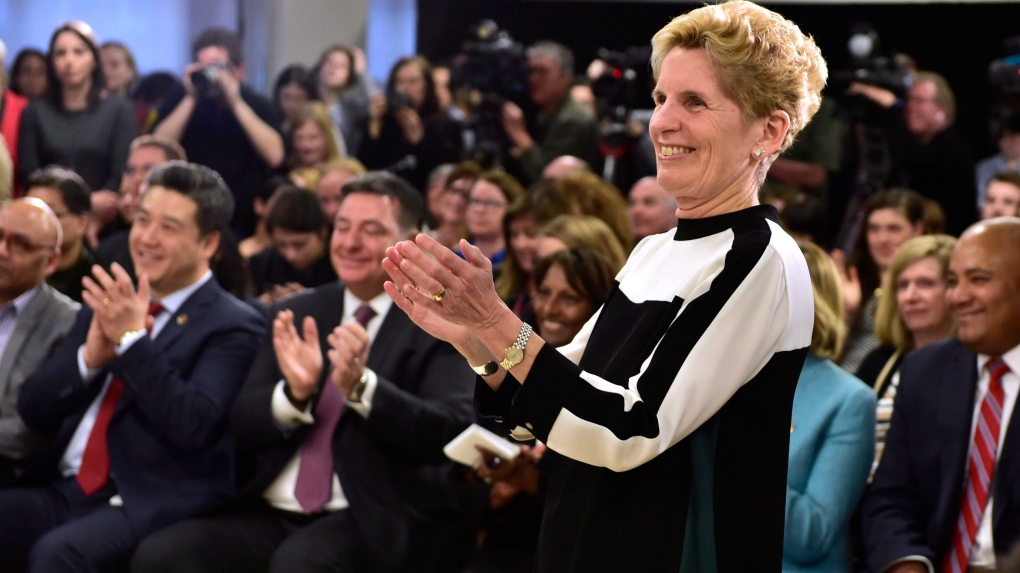 The piece de resistance was the announcement that the Liberals plan to introduce universal child care for children between the ages of two-and-a-half and four-years-old, starting in 2020, at a cost of $2.2 billion over three years.

After the budget, Wynne made a speech to the Economic Club of Canada where she said the election presents voters with “the clearest, starkest choice in the province’s history.”

“We can go forward with the agenda that I’ve outlined, or we can go backward with Doug Ford,” she told the crowd. “It’s a choice between care and cuts.”

In an interview on CTV’s Your Morning, Wynne reiterated the theme of what voters might lose.

The Liberals’ budget will push the province back into deficit for the next six years, and that’s expected to push the debt per person to $26,000 by 2021, the Auditor General reports.

While borrowing money year-after-year might make some voters anxious, Thomas and Cochrane say that running a deficit and promising major new spending is part of a necessary strategy to win over NDP voters, as centrist votes move toward the PCs.

“I think she’s making all the right moves, saying, ‘look, we are running to the left, we are left-leaning party, there’s nothing even centrist, really, about us,’” says Cochrane.

Wynne told Mediwake that, while spending is “one way of looking at it,” she sees the deficits as “investments in a future economy.”

“I’m in politics to work to put supports in place for people that they need and solve problems,” Wynne went on. “I think that’s what government exists to do.” 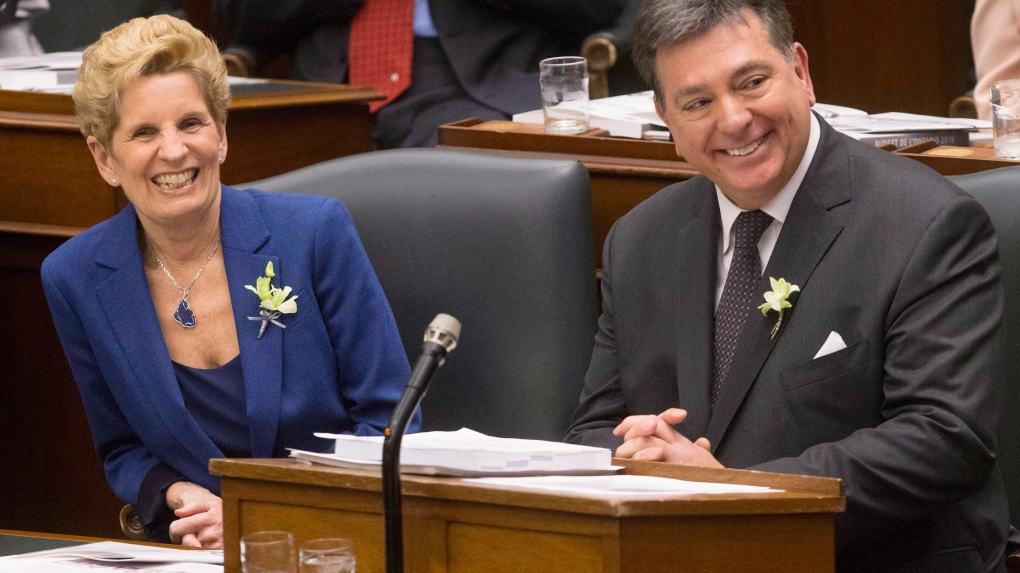 Kathleen Wynne and Charles Sousa sit in the chamber at Queen’s Park after delivering the 2018 Budget, on Wednesday, March 28, 2018. (THE CANADIAN PRESS/Chris Young)

It appears at least some voters agree. A Forum Research poll taken in the days after the budget found that the Liberals had gained ground after months of running a distant second or even third to the PCs.

The poll of 728 people, which had a margin of error plus or minus four per cent, found the Liberals had the support of 29 per cent of decided and leaning voters, compared to 36 per cent for the PCs and 26 per cent for the NDP.

The same poll found a majority of voters agreed with the Liberals that government should provide free daycare (53 per cent), up spending on special education (55 per cent) and give hospitals a cash injection (74 per cent).

“The increase in support for the Liberals is as drastic as it is sudden,” Forum Research’s president Lorne Bozinoff noted at the time.

"If the Liberals can turn this spark of life into momentum, it could open the door just slightly toward a competitive race in June,” he said.

A Forum poll taken weeks later showed what a difficult climb that could be for the Liberals, who had dropped back down to 21 per cent of leaning and decided voters, putting them in third behind the NDP at 27 per cent and the PCs at 46 per cent.

But Colin Macdonald, a Liberal adviser, told CTV News Channel just before the writ dropped that he believes Wynne can turn the numbers around by focusing on what voters could lose under Ford, whether it’s the prescription drug coverage promise or “free” childcare.

“Some people might dismiss them as freebies,” he said. “But (they’re) important to the people of Ontario.”