How Doug Ford could win the Ontario election | CTV News

How Doug Ford could win the Ontario election

Days after winning the Ontario Progressive Conservative leadership race in March, Doug Ford was asked why he insisted on framing his opponents as elites. Ford is a wealthy man who inherited a company from his politician father. Isn’t he also an elite? 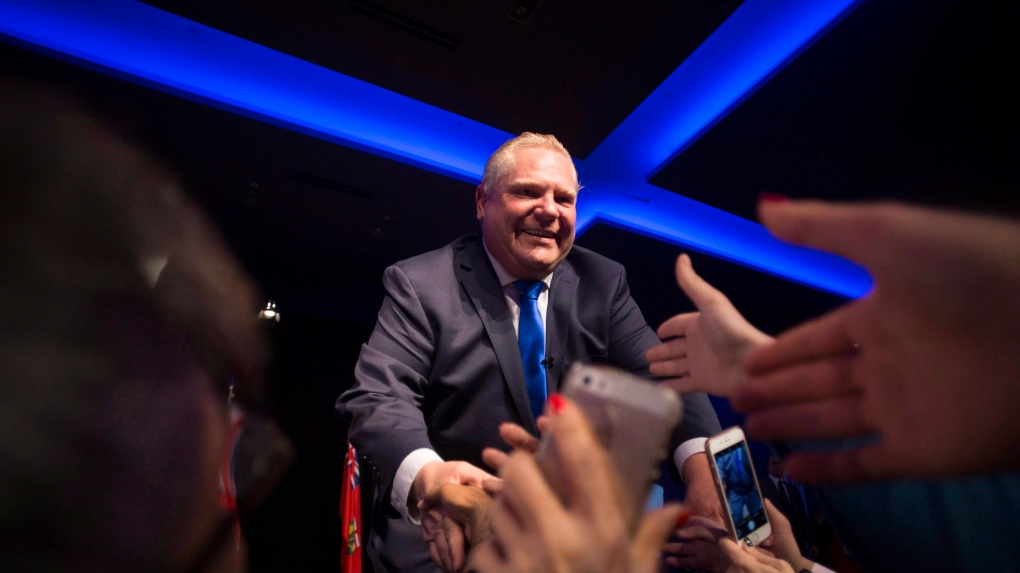 “It has nothing to do with money,” Ford told Ontario’s public broadcaster, TVO. “I know people with half a billion, a billion dollars who will grab a shovel and start diggin’ a ditch. The elites, they think they’re smarter than you. They look down at you like you’re some sort of Neanderthal … They stick their nose up at you and when they drink their champagne and have their little pinky up in the air.”

Unlike elites, Ford drinks milk straight from the container, he said.

For anyone who lived through the world-famous mayoral term of Doug’s younger brother, Rob Ford -- an era when Doug served not only as a city councillor but also as de facto co-mayor -- the comment would have sounded familiar.

The Ford family has built a strong brand by drawing a distinction between the people they label as fat cat, gravy-train riding elites (read: other politicians) and those regular folks who drink straight from the carton and are suspicious about how their tax dollars are being spent. 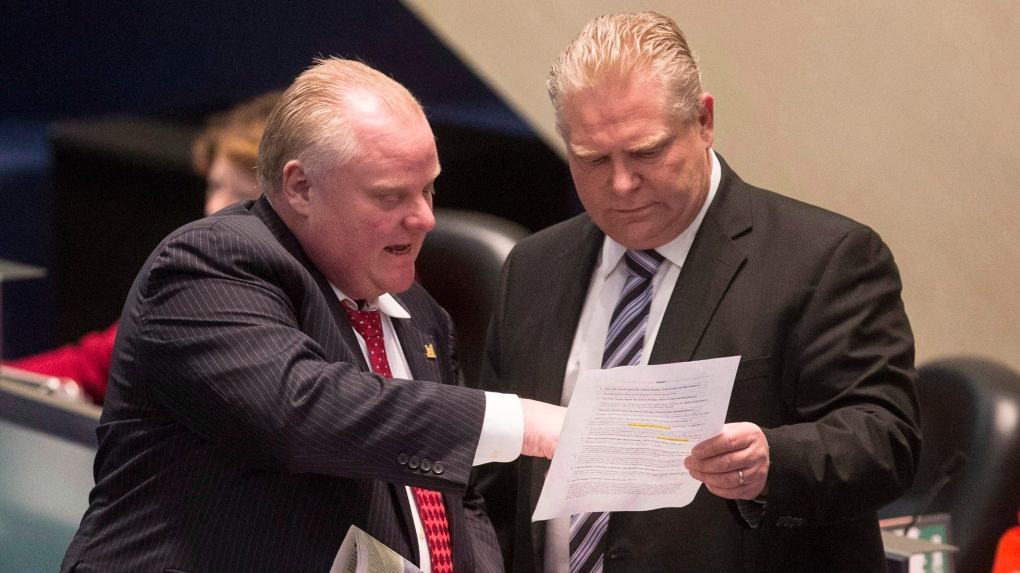 In an election in which it appears Ontarians are sick of the incumbents -- the Liberals have been in power 15 years, and poll after poll finds the majority of voters want change -- Ford’s populist message appears to be resonating.

“Ford just embodies anti-eliteness in everything he does,” says University of Toronto politics professor Chris Cochrane.

“People point to his wealth and his background to say he’s a false prophet of populism, but when he speaks you can tell he’s not cut from the same cloth as a typical politician, and that’s a huge advantage at a time when people are frustrated with government,” he says.

Carleton University’s Paul Thomas agrees. “He’s the kind of candidate who fits well with the general assessment of what the Liberals have done wrong, which is that they’re a high-tax kind of government, bringing in the carbon levy and not good guardians of the public purse,” he says.

The trick for Ford, they say, will be to sell that anti-elite message without making the types of mistakes that took down two previous PC leaders.

For former PC leader John Tory, the mistake made was taking a position on a divisive social issue by promising to fund non-Catholic religious schools, they say.

For Tory’s successor, Tim Hudak, the major stumble was spooking voters by vowing to cut 100,000 public sector jobs, according to Cochrane and Thomas.

Focus on efficiencies, not cuts

Thomas and Cochrane say Ford seems to understand he can’t be seen as a threat to public services.

They point to how he answered when asked about cuts at a debate in March.

When Ford spoke to CTV’s Power Play in March, he repeated the assertion that he could find major “efficiencies,” claiming he and Rob managed to cut a billion dollars from Toronto’s city budget "and not one single person was laid off."

Ford gave supervisors “who report into 12 other supervisors,” as an example of a possible efficiency.

“In the private sector, a supervisor will look after probably 15 people roughly, so when these supervisors all decide to retire, through attrition, we just aren’t going to replace them,” he said.

Thomas and Cochrane say the billion dollar claim isn’t backed up by reality. Ford made similar claims when he ran against Tory for Mayor of Toronto in 2014 but the numbers never added up. Ford pointed to things like privatizing some garbage collection as saving $80 million, but the city said at the time that privatization saved more like $11 million per year. 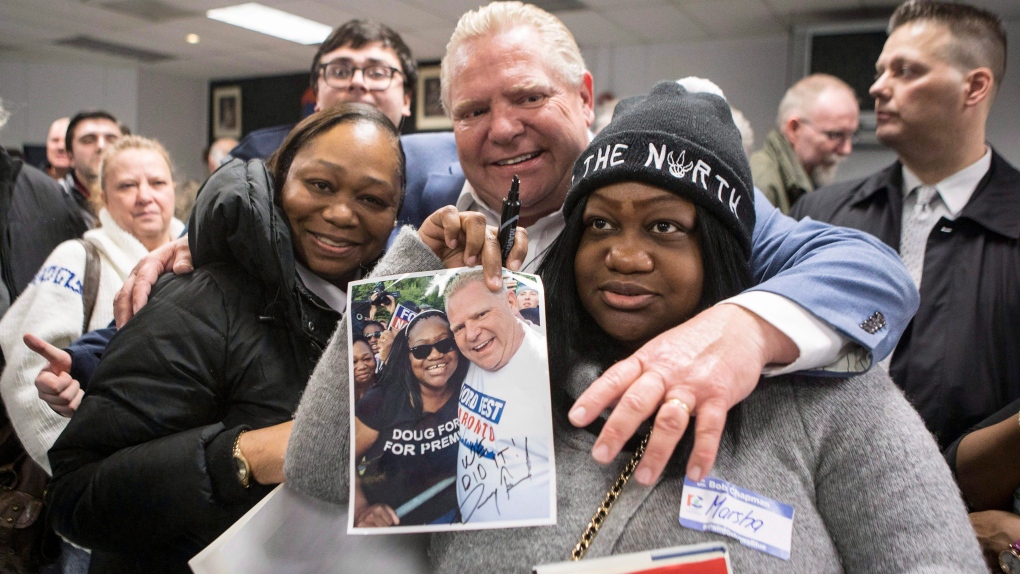 Ford also claimed that cutting the $60 annual vehicle registration fee saved taxpayers “$200 million.” That may have been a savings for taxpayers, but it wasn’t an “efficiency,” so much as a giant hole in the budget.

Economists have suggested Ford won’t be able to pay for some of his spending promises, like child care rebates of up to $6,750 per family and $1.9 billion for mental health care over a decade, if he also follows through on his vows to scrap the cap-and-trade program and cut corporate taxes--unless he also cuts the public service.

But that might not matter, considering how the Liberals have managed the books. The Wynne government has been accused by Auditor General Bonnie Lysyk of “dramatically understating” the size of the deficit and Moody’s downgraded Ontario’s finances from “stable” to “negative” in April.

Besides, Ford appears to have found an economic message that could resonate. Like U.S. President Donald Trump, he argues he can spur growth in manufacturing by reducing taxes and regulations.

“You see what’s happening south of the border,” Ford told host CTV’s Your Morning in March.

“You see what’s happening south of the border,” Ford told host CTV’s Your Morning in March. “They have trillions of dollars coming in, the lowest unemployment we’ve seen in 20 years, and they have manufacturing jobs flowing back into the country. Up in Ontario, you have more red tape, more rules, more regulations … the carbon tax ... the highest hydro rates … some of the highest property taxes, and then you’re supposed to compete?”

He offered a similar assessment to a crowd in Markham, Ont. “Ontario was once the economic engine of this country, among the greatest manufacturing economies. Ontario cars, manufactured goods ... were found in every single store in North America ... The engine of our country under the Liberals is now a have-not province.”

Ford has repeatedly said he plans on putting a “big neon sign” on the Canada-U.S. border that says “Ontario is open for business.” It’s the type of symbol -- like Trump’s wall on the Mexican border -- that could stick in voters’ minds.

Cochrane and Thomas say the jury is still out on whether Ford will be able to avoid taking sides on divisive social issues.

Ford did manage to avoid Tory’s fatal pitfall when he was asked on Power Play whether he would get rid of the parallel Catholic and non-Catholic public school systems.

Ford simply reframed the issue around -- what else -- efficiencies. “They’re two separate school boards so we’ve got to respect that, but we have to share the synergies and make sure on the procurement side that we drive the efficiencies,” he said. “What drives me nuts is you have two Taj Mahals, one separate school board and one right beside it.”

On social issues, both Cochrane and Thomas say that key ally in the leadership race, Tanya Granic Allen, could push things off the rails.

Granic Allen, who is running in Mississauga Centre, is the social conservative activist who placed fourth in the provincial PC Party leadership race, but whose voters overwhelmingly ranked Ford second on the ballot, helping him to squeak past challenger Christine Elliott.

The anti-abortion group Campaign Life Coalition later took credit for Ford’s win, saying they had helped Granic Allen sign up 9,000 members and told them to make Ford their second choice.

Part of what appeals to anti-abortion activists is Ford’s position that children under 18 should be required to get parental consent for abortions. 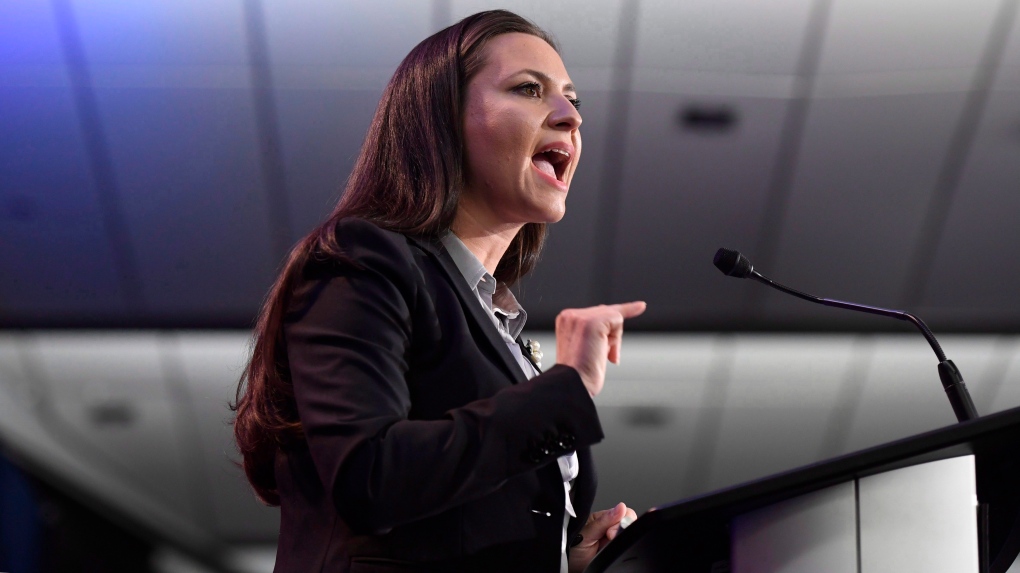 Tanya Granic Allen participates in a debate in Ottawa on Wednesday, Feb. 28, 2018. (THE CANADIAN PRESS/Justin Tang)

Thomas says it’s common for right-leaning politicians to court social conservatives with positions like that in order to win leadership races, but they can hinder them in general elections.

Cochrane says it was a “preposterous" claim considering what’s actually in the curriculum, and repeating it could make the PCs look like liars, or like they’re attacking LGBT people.

“Diplomacy isn’t (Granic Allen’s) strong suit and subtlety isn’t her strong suit, so if she’s the voice of the party on the sex ed curriculum, I think that will be much to their detriment,” Cochrane says.

“But if Ford plays it pretty tight to the chest, sticks to simple messages and doesn’t get caught up in anything like school sex ed curriculum, he has a very good chance in this election.”