When Jamie Towers gave birth to her daughter Marley almost two years ago, daycare was never part of the plan for the new family.

“It’s just ridiculously expensive here,” Towers, a Vancouver resident, said. “Some places you’re paying more for child care than you are for rent. “

Towers, an eyelash technician, went back to work only eight months after she gave birth, while her husband, Neil, gave up his full-time job with a moving company to become a stay-at-home dad.

It’s become an all-too familiar story – young Canadian families often find the costs of putting their child in full-time care more of a burden than living off a single income.

A typical dual-income family with young children in Canada spends about one-third of their net income on childcare fees – and that’s if they can even get their child into a child care program.

A new study by the Canadian Centre for Policy Alternatives explored the problem, surveying licensed full-time child care facilities in 28 cities across the country to find median child care costs in Canada.

They found that the median price of licensed child care for an infant in Toronto is almost ten times what you would pay for a similar service in Montreal. At $1,685 a month, a year of child care can end up costing Toronto families almost as much as four years of university tuition.

CTVNews.ca presents a breakdown of the full report, exploring the costs and scale of the child-care problem in Canada.

In the study, child care is divided into three categories – infant, toddler, and preschooler. The researchers define these categories as birth to two years for infants, 18 months to three years for toddlers, and two-and-a-half years to kindergarten age for preschoolers, which is age four or five, depending on the province.

These categories often see wildly different prices for full-time care, as a result of the smaller number of facilities available for infants, as well as the higher ratio of caregivers to children required by law. This means that while preschool age child care tends to be a lower figure overall, it gives the best idea of what the average family pays, since half of children in child care centres in Canada fall into this category.


The costs of child care across Canada

The most recent Statistics Canada figures from 2011 found that 54 per cent of parents reported using child care services for their children under four years. David Macdonald, senior economist at the Canadian Centre for Policy Alternatives and co-author of the Time Out study, say that this number reflects the fact that generally, Canadian parents work, and need to find some sort of child care.

With a national average cost of approximately $10,000 a year, child care can often cost as much as a year of university tuition. And these figures assume a family only has one child that needs to be enrolled in child care.

Looking across the country, the study found that Ontario has the top three cities with the highest child care costs, localized in the Greater Toronto Area.

Toronto is the most expensive city for child care, with the median cost of infant care in the city being $1,685 a month, or $20,220 annually. Toronto is followed closely by Mississauga at $1,591 monthly and Vaughan at $1,360. The next highest cost, and the first outside of Ontario, is Vancouver, with a median cost of $1,400.

Toddler- and preschooler-aged care costs are lower, but still expensive, at $1,367 and $1,150 in Toronto, respectively.

Mobile users: tap here to see a responsive version of the above table

On the opposite end of the spectrum, Montreal has the lowest costs for child care, with a median cost of $175 per month. That number is followed closely by Gatineau, Laval, Longeueil, and Quebec City – all with a median cost of $190. These cities don’t necessarily charge more, however – the differences are a result of the way their fees are calculated.

Quebec isn’t the only province to regulate fees, however – Manitoba and P.E.I. also have government-set rates in some facilities. Quebec’s system remains unique though, as the fees for child care don’t change based on the age of the child. This more affordable infant care allows parents to get back to work quicker after the birth of their child.


Fees on the rise across Canada

And researchers aren’t quite sure why that’s the case.

Macdonald says that while some fee increases, such as those in Quebec, can be explained by set yearly increases, most can’t. “In most of the market systems, they’re also increasing, and can be increasing at a fairly quick rate.” Macdonald said. “And it’s not clear exactly why they’re increasing so rapidly.”

Brampton, Ont. saw the most drastic changes, with a 9.1 per cent jump in fees over the past year, which can be attributed to individual care providers raising fees, as well as new facilities with higher prices opening. 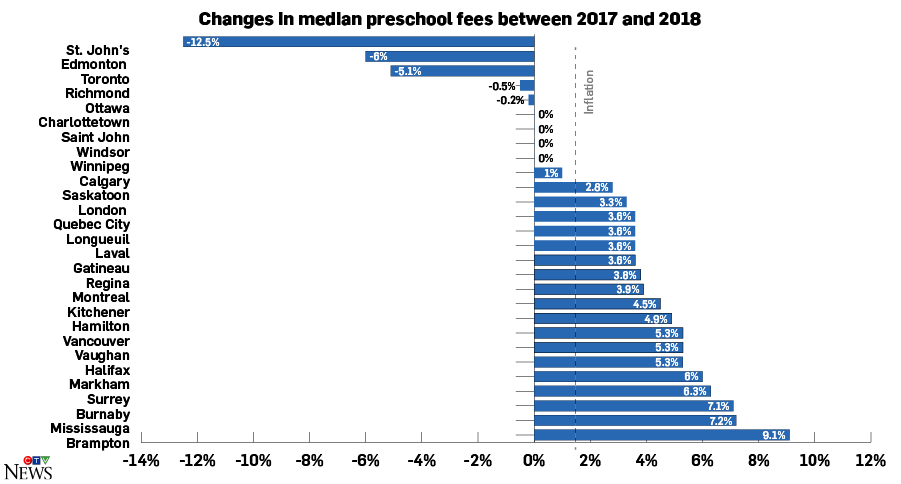 St. John’s, Edmonton, Toronto, and Ottawa are also outliers, with a drop in fees of up to 12.5 per cent, while Charlottetown, Saint John, Winnipeg, and Windsor had fees remain the same.

Surprisingly, Richmond B.C., also saw a drop in fees over the year, after being seeing the highest jump in fees from 2016-2017 at 12 per cent.

Some of these changes can be attributed to new child care programs going into effect in Alberta and British Columbia to help reduce the cost of child care.

Alberta added another 100 child care centres to the provincial government’s $25 a day program, which had previously only included 22 facilities.


Canada versus the world

But how do the fees Canadians pay stack up to the rest of the world?

A 2016 study from the Organization for Economic Co-operation and Development found that Canadian families spend almost one-quarter of their income on child care – one of the highest amounts worldwide.

This is in part because most of Canada’s child care providers operate under a market system. “The market system, where you leave most of the pricing up to the market, is pretty unusual in the developed world.” Macdonald said. “There’s often much more involvement of governments.”

The study by the OECD, which focused on the economic status of young people, found that the average dual-income families in wealthy nations spend approximately 15 per cent of their net income on childcare. In Canada, this figure is as high as 22 per cent on average, with the United Kingdom having the highest figure with 33.8 per cent.

And the situation is worse for single parent families in Canada, which spend up to 33 per cent of their income of child care on average. In this aspect, Canada is behind only the United States and Ireland, at 52.7 per cent and 41.6 per cent, respectively. 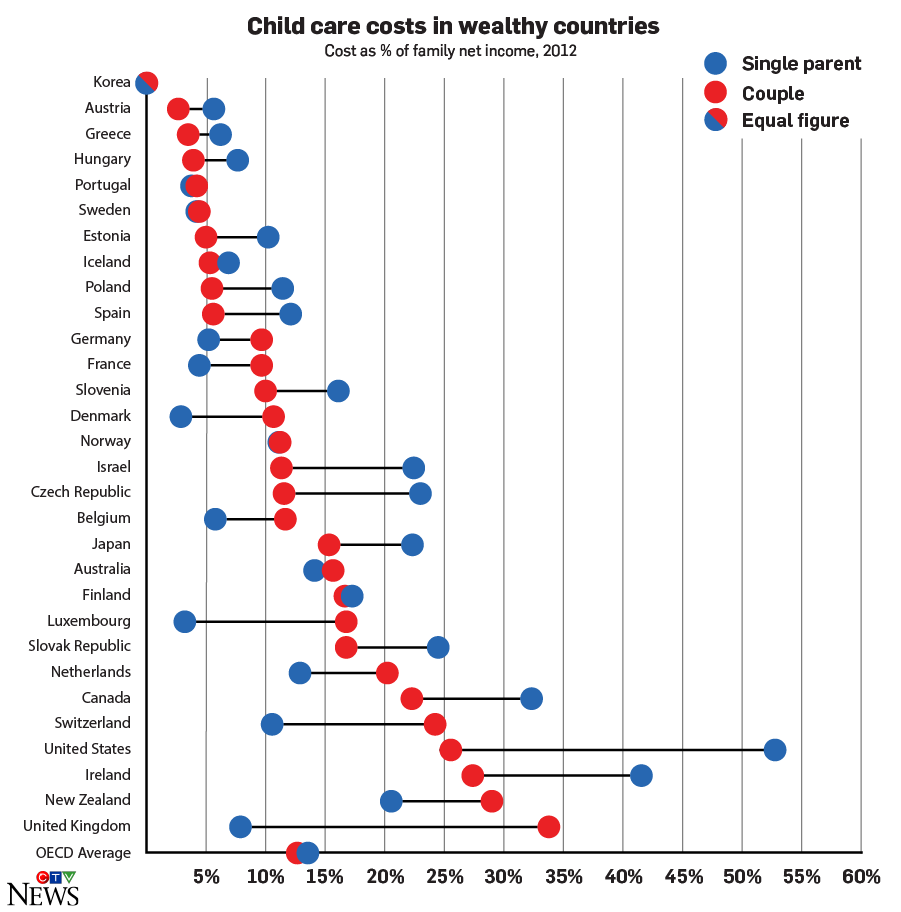 These high costs often affect Canadian’s decisions not to work, as having to pay for child care is cost prohibitive. Women are often affected by this most, with the decision to become a stay-at-home mom to avoid the costs of child care directly contributing to the gender wage gap that exists in Canada.

That’s not only bad for families, but has major implications for the economy, as these families have less taxable income.

But costs can be only half the battle for families when it comes to child care. The demand for child care greatly surpasses availability in most cases. “One of the common features is the prevalence of waitlists across the country, almost irrespective of where you are,” Macdonald said. “Eighty to ninety per cent of centres will be maintaining a waitlist.”

Researchers found that in almost three-quarters of the cities covered in the study, centres maintained lengthy waitlists of children waiting to enter care programs. Bigger cities see 80 to 90 per cent of centres maintaining a waitlist, while even smaller cities like St. John’s are in the 79 per cent range.

Wait lists are one of the major hurdles keeping parents from accessing quality child care, with families having to start the process early if they want to get their child enrolled. “You have to apply basically while you’re pregnant,” Jamie Towers said. 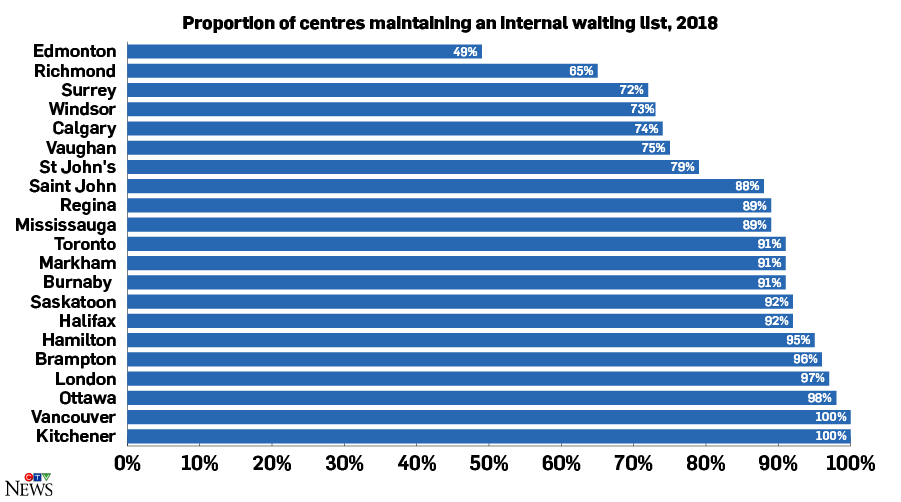 In many places, these waitlists also require parents to pay a fee to have their child placed on the waitlist. These fees can range anywhere from $50 to $200 or higher, and since most child care facilities have their own lists, parents may have to pay multiple wait list fees while waiting for a spot to become available.

The prevalence of wait fees has dropped dramatically from recent years, since the government of Ontario prohibited charging waitlist fees in 2016. Despite the ban, wait fees still exist in some Ontario cities, though they’re much less common as a result. A drop was also seen in British Columbia, despite no such legislation existing there. 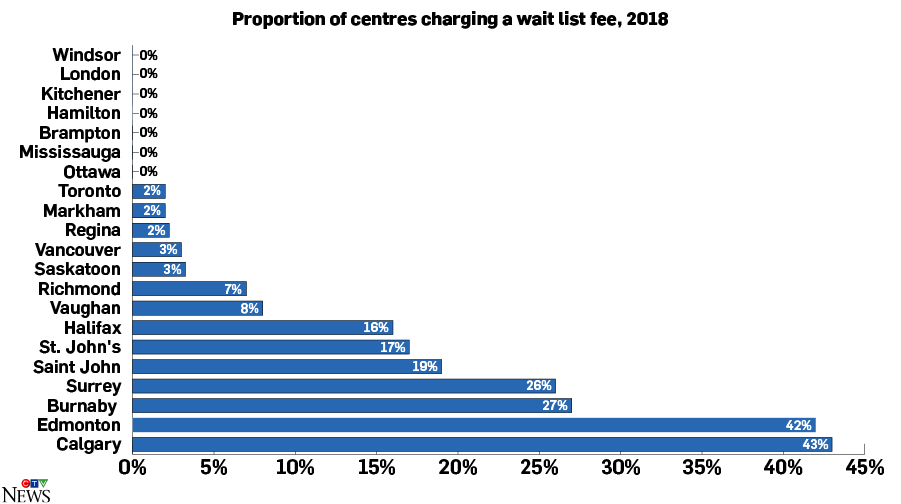 There prevalence of wait list fees is on the rise in Alberta however, as the reduced child care costs have resulted in an even greater demands for spots.

Recognizing the problem that child care presents for almost 75 per cent of Canadian families, efforts are being made on both the federal and provincial level to make child care more accessible.

In the 2017 federal budget, the Trudeau Liberals pledged funding for childcare through 2028, spending $7 billion to help lighten the weight of child care costs. The plan would see $540 million spent in the 2018-2019 period, creating 40,000 new subsidized daycare spaces across the nation.

On the provincial level, British Columbia’s NDP government has announced the $1-billion beginning of a 10-year plan to introduce “universal” child care in the province. The plan will introduce subsidies paid directly to child-care centres, lowering costs by up to $350 per child, depending on their age and family financial situation. The plan appears to have had high-opt in rates, but data on the full impact of the program will not be available until next year.

The previously mentioned Alberta $25/day program has also been successful, though the report notes that the participation rate in these centres is still low – meaning parents often end up paying higher market rates.

Above all else, Macdonald believes the best solution requires a change in how most of Canada approaches child care entirely, changing to the government set-fees model that Quebec, and much of the rest of the developed world, utilizes.

“I think it’s clear that if you want more affordable child care, the solution in the Canadian situation is to set fees and make up the difference to providers,” Macdonald said. “That’s consistently produced the lowest fees, as opposed to any other approach to fees – particularly to middle-class families.”

This story has been updated to reflect the most recent data from the Child care fees in Canada’s big cities 2018 study.