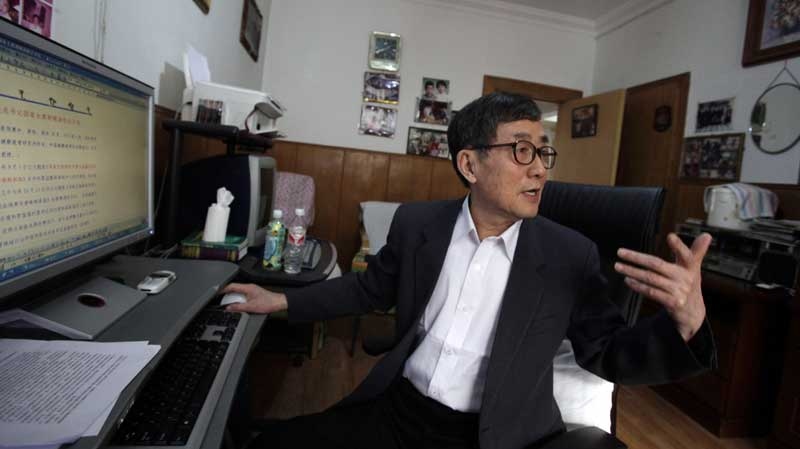 Chen Bingzhong, 78, formerly head of a government health research and outreach agency, talks about the open letter he issued that is circulating on the Internet in Beijing Tuesday, Nov. 30, 2010. Chen is calling on the government to come clean about a 1990s blood-selling scandal that infected tens of thousands of people with the virus that causes AIDS.

BEIJING - In his dying days, a retired Chinese health official is calling on the government to come clean about a 1990s blood-selling scandal that infected tens of thousands of people with the virus that causes AIDS.

His appeal this week for a full and open investigation highlights a contradiction in China's AIDS policy. Even as the government has become more open and better at treating HIV, it has refused to acknowledge past lapses, which it fears could embolden citizens to challenge its legitimacy.

"Not even one word of apology has been given to the victims, much less those who died, this is not how politicians should act," 78-year-old Chen Bingzhong wrote in an open letter to President Hu Jintao. "How can dealing with such a major disaster this way ever be explained to our countrymen, especially the many victims?!"

The Health Ministry did not respond to a faxed request for comment. The letter was distributed Sunday by Beijing Aizhixing Institute, an AIDS advocacy group, and is circulating on the Internet.

The scandal, which helped HIV gain a foothold in China, unfolded in the central province of Henan and is widely seen as a failure of government leadership.

Collectors paid villagers to give their blood, pooled it without testing for HIV or anything else, extracted the valuable plasma then re-injected the blood back into those who sold it.

Officials covered up the problem for years, which allowed HIV to spread when people were unknowingly infected from tainted transfusions at hospitals.

"I think everyone believes it is outrageous that ... the government encouraged people, in an organized manner, to sell blood and then later on they got these diseases," said Professor Kin-man Chan, director of the Center for Civil Society Studies at the Chinese University of Hong Kong. "So why were people who ... were in power not prosecuted?"

Chen, who once headed the government's health research agency, said in his letter that the scandal left more than 100,000 people infected with HIV and killed at least 10,000.

"As a former health official, I have a responsibility to publicize this issue and let everyone know the truth," he said by phone from his Beijing home.

Chen said two current members of the ruling Communist Party's powerful, nine-man Politburo Standing Committee — propaganda chief Li Changchun and Vice Premier Li Keqiang — should be called to account for what happened in Henan. Both were party chiefs of Henan between 1992 and 2004.

"They have lied to their superiors and hidden the truth from the common people. They are guilty of serious dereliction of duty," Chen said.

Several others have tried to draw official attention to the scandal, notably Gao Yaojie, an elderly doctor who received numerous awards for her efforts in the 1990s to alert people in the province to the outbreak.

Chen, who has terminal liver cancer, is one of the more senior former officials to voice criticism publicly.

The government has taken a more active stance on AIDS in recent years. China's Cabinet pledged Monday to expand HIV screening and reach out to groups at risk of infection.

Authorities in Henan have provided some financial help to many who contracted HIV from selling their plasma, but largely ignored those who got it through transfusions, said Wan Yanhai, founder of the advocacy group Aizhixing. Local courts reject lawsuits for compensation, leaving the victims with few avenues to seek redress, he said.

The frustration boiled over in August for one activist, 23-year-old Tian Xi, who contracted HIV from a blood transfusion as a boy. He was arrested after he smashed office equipment during a meeting with the administrator of the hospital where he was infected.

Tian was tried in late September, but the case was suspended recently without a decision and no word on when it would resume, said his lawyer, Liang Xiaojun.

It would not be the first time an AIDS petitioner was punished for seeking compensation. At least 10 victims from Henan were sent to labor camps in the past three years for attempts to gain reparation, Wan said.

Despite the risks, many say they will not give up. Last Tuesday, about 60 petitioners traveled from Henan to Beijing to lobby the Health Ministry for help.

"We want the government to admit that HIV infections from blood transfusions are a serious public health incident and compensate us," said Sun Ya, 42, whose 14-year-old son was infected by a blood transfusion. "On its own, AIDS should not be a political problem, but when the courts reject us, it becomes politicized."