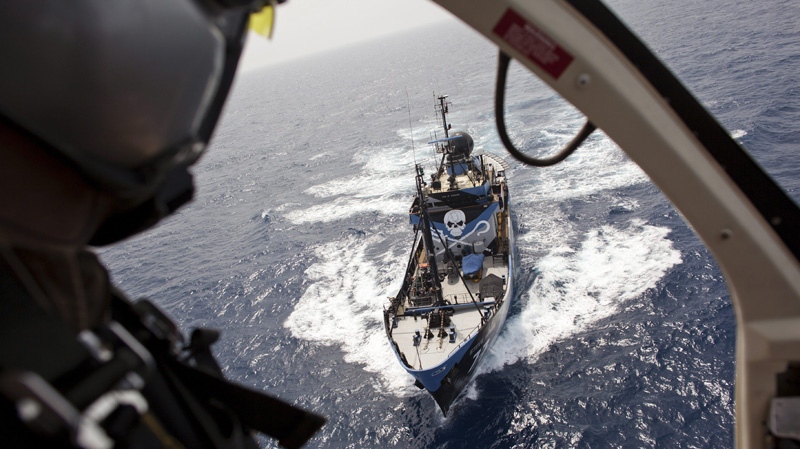 ABOARD THE STEVE IRWIN - Tuna fishermen confronted environmentalists on the Mediterranean on Saturday, as activists attempted to disrupt illegal tuna fishing under the no-fly zone north of Libya.

The fishermen attacked the Steve Irwin, owned by the U.S.-based Sea Shepherd Conservation Society, by hurling heavy metal chain links aboard. They also attempted to lay a rope in front of the activists' boat, hoping to disable it. Environmentalists responded with water from fire hoses and stink bombs.

Several hundred feet above the fray circled a French fighter jet, summoned by the fishermen -- who claimed, falsely, that activist divers were trying to cut their net.

The 59.5-metre Steve Irwin, named after the Australian conservationist who died in 2006, left the Sicilian port of Syracuse early Friday, heading for a rendezvous with a smaller, faster sister ship, the Brigitte Bardot, just north of Libyan waters. The Bardot had traversed the area and reported that more than 20 purse seiners were operating there.

Purse seiners are boats that deploy large nets that draw closed like a purse, ensnaring the tuna. The fish are then sometimes put in floating net-cages and slowly towed to port.

Sea Shepherd is on a mission to disrupt boats that are fishing illegally or have exceeded their quotas. The stock of bluefin tuna, which spawn in the Mediterranean and then swim out to the North Atlantic, has been depleted to the point that some experts fear it will soon collapse.

The confrontation began to take shape at first light as the sun lifted and blazed a bright white stripe across the sea. Ten purse seiners floated several miles from the Steve Irwin in one direction, with five floating in the other.

The ship's crew are true believers in their cause with vegan fare solely served on board. Yet Captain Paul Watson, the Sea Shepherd founder, and other ships officers say they only go after boats that are fishing illegally -- if they are not allotted a quota by ICCAT, the International Commission for the Conservation of Atlantic Tunas, or have exceeded it -- or their catch includes too many juveniles.

As the Steve Irwin approached the group of five boats to determine their identities and inspect their catch Saturday, high stakes maneuvering began at close quarters.

The boats were Tunisian, at least one was not licensed to fish -- according to the Irwin's crew -- and they did not respond to radio calls.

The Sea Shepherd environmentalists -- who have no official enforcement powers -- deployed a small launch to inspect the cage, while the Tunisians suddenly scrambled two, then three small dinghies to protect their net. Others tried to cut off the Steve Irwin or chase it away.

Fishermen in the larger boats threw heavy links of chain at the environmentalists -- hitting no one, but eventually forcing the dinghies to retreat without being able to determine if there were tuna in the cage.

A larger Tunisian boat pulled along the port side of the Steve Irwin and the crew pelted the environmentalists with chain links. The crew of the Irwin responded with stink bombs containing, they said, rancid butter.

A Tunisian dinghy also towed a rope in front of the Steve Irwin, hoping it would get tangled in the propeller and disable the ship.

Meanwhile, the cries of the Tunisians could be overheard radioing the French military for help, saying environmentalist divers were in the water trying to cut their nets.

That was not the case. However, the Sea Shepherd volunteers are prepared to do exactly that to free the tuna, if they determine the fishing to have been illegal -- and they have done it in the past.

The Irwin's officers deemed sending in divers at this point too dangerous. The Tunisians were aggressive, and they had deployed divers to protect their cage -- which could have led, in effect, to hand-to-hand combat in the sea.

A French military jet appeared on the scene in short order and flew over the area at an altitude of a couple of hundred feet as the drama unfolded below.

Eventually, the Steve Irwin broke off contact so it could continue to research whether the fishing was illegal. Ships officers said at least one of the boats had no quota assigned. Watson and other officers on the Irwin said they found the Tunisian's behavior suspicious.

The crew of the environmentalists' ship was making more inquiries and coordinating with the Brigitte Bardot, and at midday Saturday, the possibility of more confrontation loomed.