Young, Cockburn touch on politics as they join Canadian Songwriters Hall of Fame 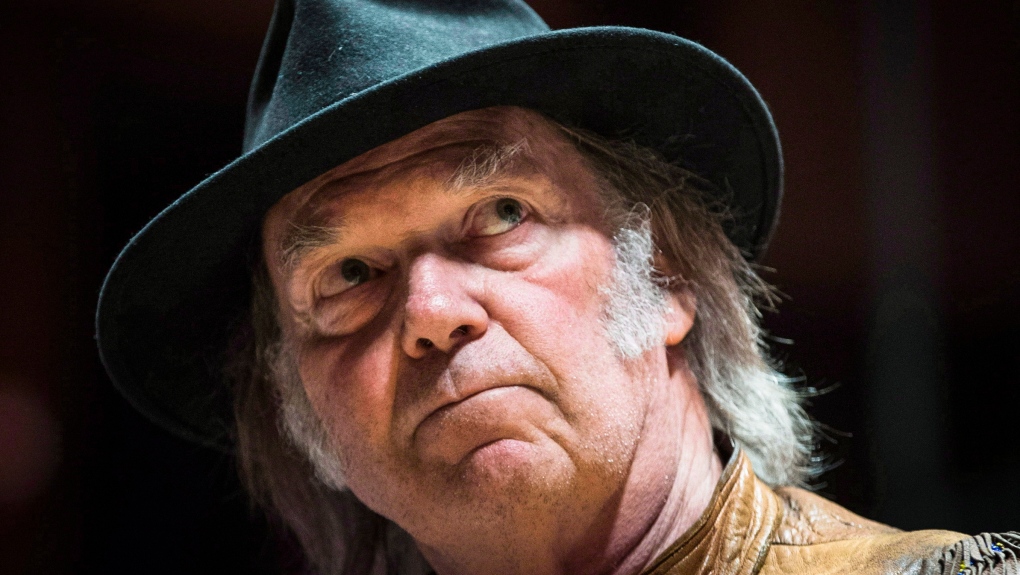 Singer Neil Young said Thursday that the Keystone XL pipeline makes no sense since the oilsands bitumen would be sent to China. (CP / Mark Blinch)

TORONTO -- Legendary artists Neil Young and Bruce Cockburn were ushered into the Canadian Songwriters Hall of Fame on Saturday with a celebration that carried a few political undertones.

While the concert and induction ceremony at Toronto's Massey Hall generally steered away from overt social statements, it seemed almost impossible for two of protest music's most influential Canadian songwriters to ignore the current state of global politics.

"I'm terribly proud to be Canadian," Young told the crowd as he was inducted. "I know I've travelled a lot ... but I've always been a Canadian citizen."

"I love the U.S.A. -- by the way," he added before leaning into Donald Trump's "Make America Great Again" campaign slogan.

"My message is: They're already great."

That's about as close as the 71-year-old singer got to his activist side.

A tribute performance of his song "Ohio" by rock band Whitehorse inched a little closer. Originally written about the 1970 Kent State shootings, Whitehorse played their cover in front of a projection screen with the names of young men killed by police, including Freddie Gray, Eric Garner, Walter Scott and Canadian Greg Matters.

"We'd like to say so much has changed, but we're not sure if it has," guitarist Luke Doucet said as he introduced the song.

A performance of Cockburn's "If I Had a Rocket Launcher" by Blackie and the Rodeo Kings added another notch to the political tone of the event.

It was followed by Buffy Sainte-Marie who offered her perspective on the songwriter's career as she introduced him onto the stage.

"Bruce is an agitator, an activist, a protester," she said.

He writes "words that move the needle of public opinion" and that "shine the light on injustices," Sainte-Marie added.

But Cockburn left audiences to read between the lines as he thanked his long-time manager Bernie Finkelstein.

"In a world increasingly defined its by fakery, we together have pulled off the greatest trick ever -- we spread truth," the 72-year-old said to Finkelstein.

The remarks were some of the most poignant moments in a ceremony that was otherwise spent celebrating the good times.

It marks the first hall of fame induction in five years, after the organization was acquired by the Society of Composers, Authors and Music Publishers of Canada (SOCAN), which began rebuilding its operations. Previous songwriters who received the honour include Leonard Cohen, Robbie Robertson, Joni Mitchell and Gilles Vigneault.

Among the other highlights of the night was singer k.d. lang who brought down the house with a heart-wrenching take on Young's "Helpless," which earned her a standing ovation.

Rock star Randy Bachman pulled up a stool to deliver an extended storytelling session on his memories of fellow Winnipegger Young, including when he learned the "Harvest Moon" singer's mother was calling a local radio station to boast about his live shows.

Bachman said the enthusiasm of Young's mother encouraged him to urge his own mom to show more support over the airwaves.

Quebecois inductees for the evening were Beau Dommage, a group formed in the early 1970s that became known for writing popular French folk staples, such as "La Complainte du Phoque en Alaska."

Rounding out the honourees was Stephane Venne whose songwriting career was launched when he penned "Hey Friend, Say Friend," which won an international theme song contest for Expo '67.

The success convinced him to abandon a floundering singing career and focus on writing. He went on to pen more than 400 songs for musicians including Isabelle Pierre and Renee Claude.

As he received his induction into the hall of fame, Venne offered some advice to young songwriters who feel pressured to be stage performers.

"If you have no voice, no charisma, no nothing, except this (songwriting talent), you can have fun. You can make a living," he said.